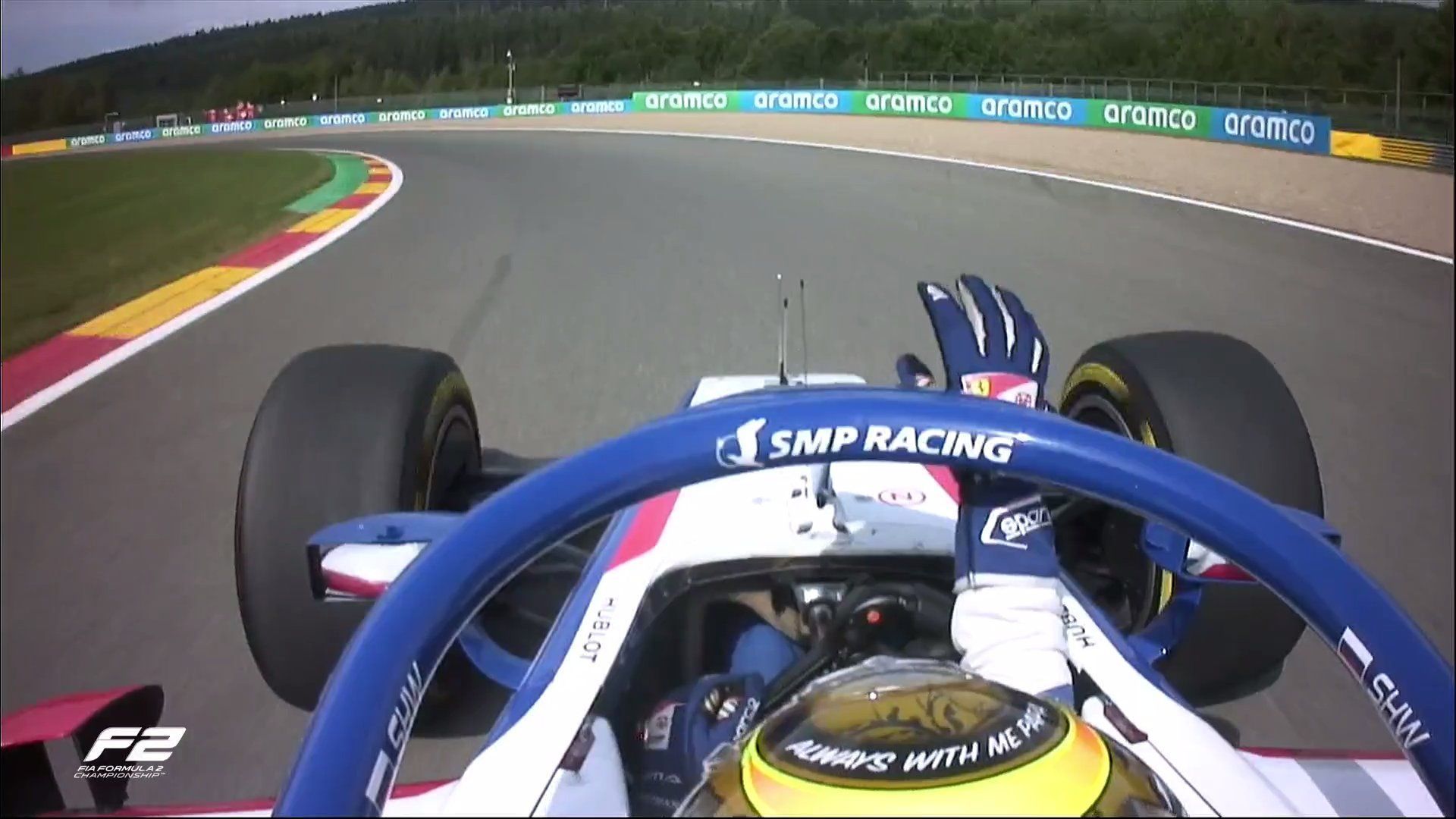 Reverse grid sprint F2 race pole-sitter and Trident’s Roy Nissany did not have a good start as DAMS’ Dan Ticktum took the lead in Turn 1 but the Israeli driver fought back at the Kemmel Straight to re-take the spot as they fought all-through the lap.

An off for Carlin’s Yuki Tsunoda pushed him into the mid-pack as he fended off UNI-Virtuosi Racing’s Callum Ilott, Hitech GP’s Luca Ghiotto and Campos Racing’s Jack Aitken but not for long as the Ferrari junior was hit from the Red Bull driver.

It ended F2 points leader’s race as Tsunoda was put under investigation for the move. This incident allowed Ghiotto to be eighth with Aitken ninth and ART Grand Prix’s Christian Lundgaard in the Top 10 as the safety car was deployed.

It wasn’t long before the race re-start that the safety car was back out again when F2 leaders collided at the exit of Kemmel Straight when Ticktum was thrown off onto the kerb and on re-joining, he tapped the back of Nissany, sending him onto the barrier.

The collision was put under investigation as Shwartzman took the lead from Ticktum and Deletraz. The re-start had the trio settle in but the DAMS driver had damage to his car as Schumacher passed Ghiotto for sixth, even before the Kemmel Straight.

As Shwartzman headed the way, Ticktum got back on Deletraz to be second with Schumacher making up multiple places to be third as the Swiss racer then dropped to sixth behind a battling duo of Zhou and Mazepin.

Tsunoda, meanwhile, was handed a five-second penalty for causing a collision a teammate Jehan Daruvala was put under investigation for infringement along with Aitken, with the latter handed a 10-second stop/go penalty for wrong grid position.

The Ticktum and Nissany incident was pushed to after the race as the Brit started to lose his tyres. He fought hard but lost places to both Schumacher and Zhou as he led a train of Mazepin, Ghiotto, Tsunoda and Deletraz behind.

The F2 race had more disruptions with the retirement of both ART’s Marcus Armstrong and Trident’s Marino Sato, where the latter was tapped into the back by Daruvala in the final corner. The Indian was handed a 10-second time penalty for the incident.

Post the VSC period, Ticktum lost all the momentum to drop to the fag end of the Top 10. At the front, though, Shwartzman ran away with no pressure as he not only won the sprint F2 race but also took the points lead from Ilott.

Schumacher ended up second but was nine seconds behind as Zhou rounded out the final podium position with Mazepin fourth, Ghiotto fifth, Deletraz sixth. Tusnoda was seventh but the time penalty dropped him to ninth with no points to his name.

It helped Lundgaard to be seventh as HWA Racelab’s Artem Markelov managed to get the final point in eighth as Ticktum hung on to 10th from DAMS teammate Juri Vips, who came back from a pitlane start to a solid 11th on his debut weekend.

At the back HWA Racelab’s Jack Doohan had a puncture as an off for Hitech GP’s Pierre-Louis Chovet had the VSC deployed. Before that, though, Sargeant passed Verschoor for the lead as Prema’s Frederik Vesti started his charge to the final place on the podium.

He passed several cars including Caldwell to be third and soon enough was second after clearing Verschoor. The Dane slotted behind Sargeant upon re-start as the Dutchman had ART’s Theo Pourchaire tugged behind him in the fight for fourth.

It didn’t take long for Pourchaire to pass Verschoor, who lost out to a recovering Lawson as well with Prema’s Oscar Piastri clearing him up too. Amid this ART’s Aleksandr Smolyar quietly made up positions too in the hunt for a Top 5 finish.

Despite the late pressure from Vesti, Prema teammate Sargeant managed to hold on well to win the sprint F3 race as Lawson eventually passed Pourchaire to third, who dropped to fifth after Smolyar managed to get by on his teammate as well.

Pourchaire lost to Piastri on the road but a give-seconds penalty for the latter meant he was relegated to sixth with the former in fifth. With no straightline speed, Verschoor could only manage seventh from Trident duo Lirim Zendeli & David Beckmann as ART’s Sebastien Fernandez rounded out the Top 10.

Here’s how F2 and F3 feature race panned out