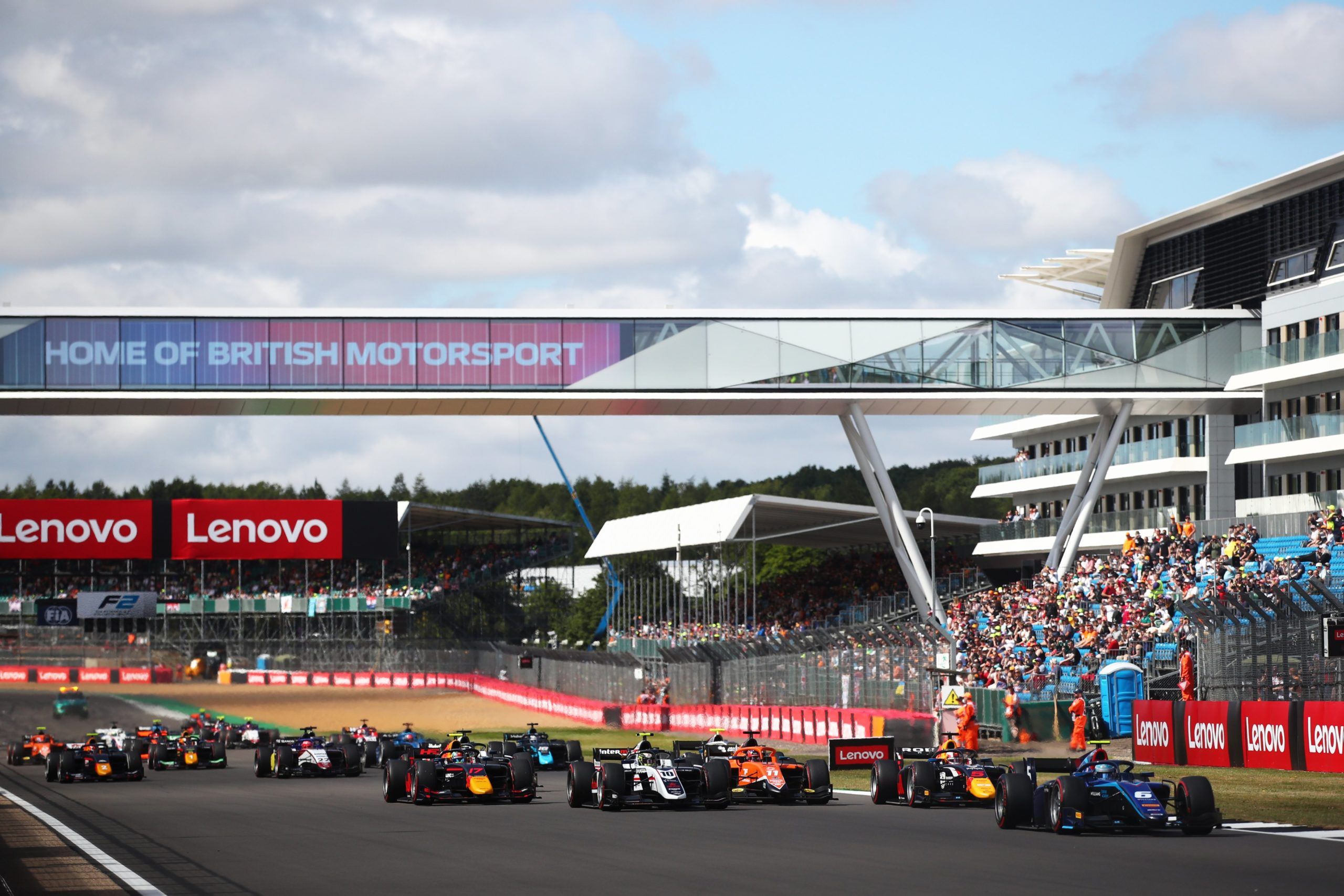 It was a clean start from feature F1 race pole-sitter Logan Sargeant in his Carlin car at Silverstone but front-row starter Frederik Vesti bogged down in his ART car to sixth as his teammate Theo Pourchaire stormed to second from Carlin’s Liam Lawson.

DAMS’ Ayumu Iwasa was fourth from MP Motorsport’s Felipe Drugovich, with Vesti behind him. Charouz’s Enzo Fittipladi was seventh from the Hitech GP pair of Juri Vips and Marcus Armstrong who cleared Prema’s Jehan Daruvala at the start.

The Indian had to fend of DAMS’ Roy Nissany at the start, with the Israeli then having to fight his teammate Dennis Hauger later on in the lap. He went to his left to defend from the Norwegian but they made contact, which put the Prema driver onto the sausage kerb.

He flew in the corner and rammed onto the car of Nissany with the Halo coming to the Israeli’s rescue. The safety car was deployed with the incident under investigation. Both drivers jumped off the car and were seemingly fine and on their feet.

The re-start, meanwhile, was clean from Sargeant who led Pourchaire, Lawson, Iwasa, Drugovich, Vesti and Fittipaldi. Behind them, Armstrong got past teammate Vips for eighth as Daruvala dropped to 12th with MP Motorsport’s Clement Novalak moving to 10th.

The soft tyre stoppers started to pit allowing Vips to take the lead from Daruvala and Doohan in the Top 3. The net leader Sargeant was seventh from Pourchaire and Lawson, as Vesti gained track position over Drugovich, who stopped a lap later.

Armstrong, Fittipaldi and Novalak came behind them as Iwasa was the biggest to drop after a slow pit stop. There was also an incident involving both the ART cars in the pits, which the stewards stated that will be investigated after the race.

Vips finally pitted with about seven laps to go just when Daruvala caught on his tail. The Estonian rejoined in net seventh behind teammate Armstrong. The Indian stopped a lap latter and rejoined just ahead of Vips, but the Estonian cleared him quick.

But both of them jumped Fittipaldi to gain track position. At the front, Sargeant was back in lead but started to come under pressure from Pourchaire, while Lawson in third had Vesti on his tail. Drugovich was a bit far off in fifth from Vips and Daruvala.

Both of them cleared Armstrong and started their chase of Drugovich who caught up with Lawson and Vesti. At the front, Sargeant eventually held off Pourchaire to win feature F2 race at Silverstone, as Lawson completed the podium in third.

The last lap saw Drugovich pass Vesti for fourth, with Vips in sixth from Daruvala, Armstrong, Doohan and Van Amersfoort Racing’s Jake Hughes, who passed Fittipaldi on the final lap as well to take the final point and also points for fastest lap.

UPDATE: Nissany was handed 5-place grid drop for the next race, with three points on his superlicense. “The Stewards examined video evidence,” said the stewards statement. “They summoned and heard the drivers and team representatives (documents 27 & 28).

“Having considered the matter extensively, the Stewards determined that Car 16 left the track at Turn 15 after making an error. The Driver rejoined the course at the exit of the corner and rather than focusing on a safe merge into traffic, made an unpredictable and unsafe move to defend his position that initiated the contact with Car 1. Car 16 was wholly responsible for the collision and fully accepted blame for the incident.”

Additionally, there was no further investigation on both the ART drivers for pit stop infringement. It was regarded position of the front left tyre of both Vesti and Pourchaire was called into question, but it was cleared. 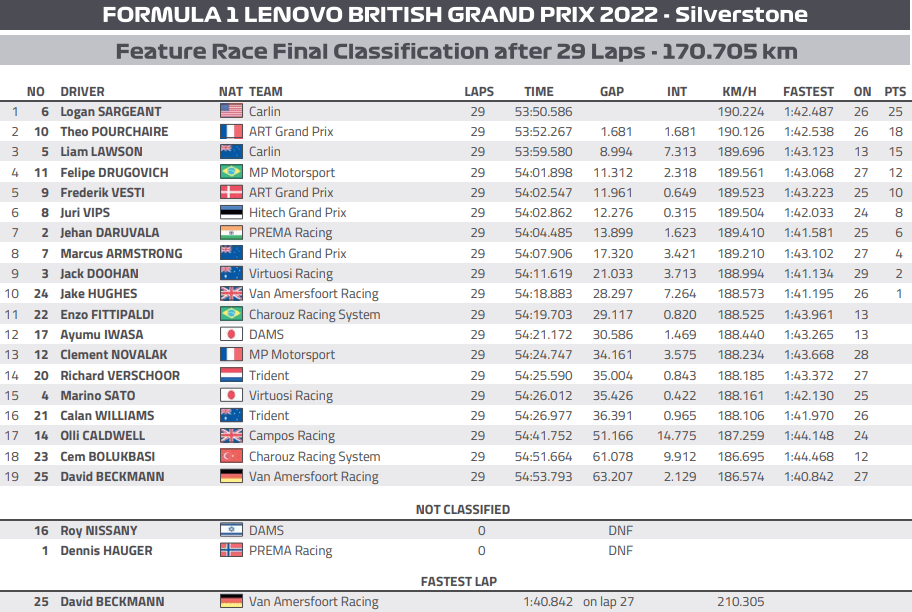 O’Sullivan covered off Leclerc to retain the lead in the opening corners. Jak Crawford fought with Zane Maloney for third but was squeezed out by the Trident driver, allowing PREMA teammate Ollie Bearman to gain a run onto the Wellington Straight. The Briton tried to hang it around the outside, but Maloney made his Trident as wide as possible. Heading into Luffield, Bearman didn’t back out, resulting in contact which spun the Bajan off track and down the order.

Collet was in the right place at the right time to take full advantage, surging up the inside at Copse on Bearman after the PREMA driver lost momentum, stealing third place. Up ahead and Leclerc had fought back and with a tow down Hangar Straight, swept around the outside of O’Sullivan into Stowe. Just as the move happened, the Safety Car was deployed and Leclerc relinquished the position to the Briton. Franco Colapinto’s stranded Van Amersfoort Racing car was the cause, stopped on the outside of Luffield.

O’Sullivan got a good restart, but Leclerc had clung with him and with DRS enabled on Lap 6, made the move stick. A sweep around the outside of Brooklands gave the Monégasque the lead of the race and despite a switchback opportunity for the Briton, Leclerc retained the position.

Hadjar and Crawford were fighting hammer and tongs for fifth and the pair came to blows on Lap 8. Side-by-side out of the final corner and down the main straight, the duo entered Abbey with Crawford on the outside but just as the American swept ahead, Hadjar narrowly clipped the rear right tyre of the PREMA driver, sending him off track and down to P8.

A slight collision between Grégoire Saucy and Roman Stanek required both to pit at the end of Lap 9 for repairs. The ART Grand Prix driver was able to re-join albeit down the order, but the Trident man was out of the race.

Another Safety Car was deployed following a crash for Rafael Villagomez at Copse. Contact with Nazim Azman resulted in the front wing becoming stuck underneath the VAR driver’s car, sending him straight into the barriers.

The Safety Car was withdrawn on Lap 15 and Martins continued his progress through the field immediately, pulling off a late dive on Frederick into Village to seal eighth place.

Next up was Crawford and the Frenchman almost pulled off an audacious overtake on the outside of Stowe on Lap 16. Aggressive defence from the American kept him ahead as the ART driver had to take to the run-off to avoid contact. Crawford refocused his attentions forward and was able to clear Jonny Edgar for P6 two laps later.

With three laps remaining, the top five was separated by just 1.5s. Bearman had been shaping up a move on Collet for several laps and finally made the lunge into Brooklands on the penultimate lap for third. Leclerc was untroubled though and secured his third F3 victory and first of the 2022 season.

Bearman stuck with O’Sullivan closely and attempted a move at Stowe on the final lap. The Carlin driver held the place but both weren’t finished yet. Into the Vale chicane and Bearman forced his compatriot to go defensive, allowing him a route up the inside at the final corner. O’Sullivan just about held onto second, running wheel-to-wheel over the line separated by just 0.051s.

MP Motorsport’s Collet held P4 ahead of Sprint Race winner Hadjar, who completed the top five. Crawford ended up sixth but with the fastest lap followed by Martins, who made a final lap move on Edgar. David Vidales and Reece Ushijima were ninth and 10th respectively. 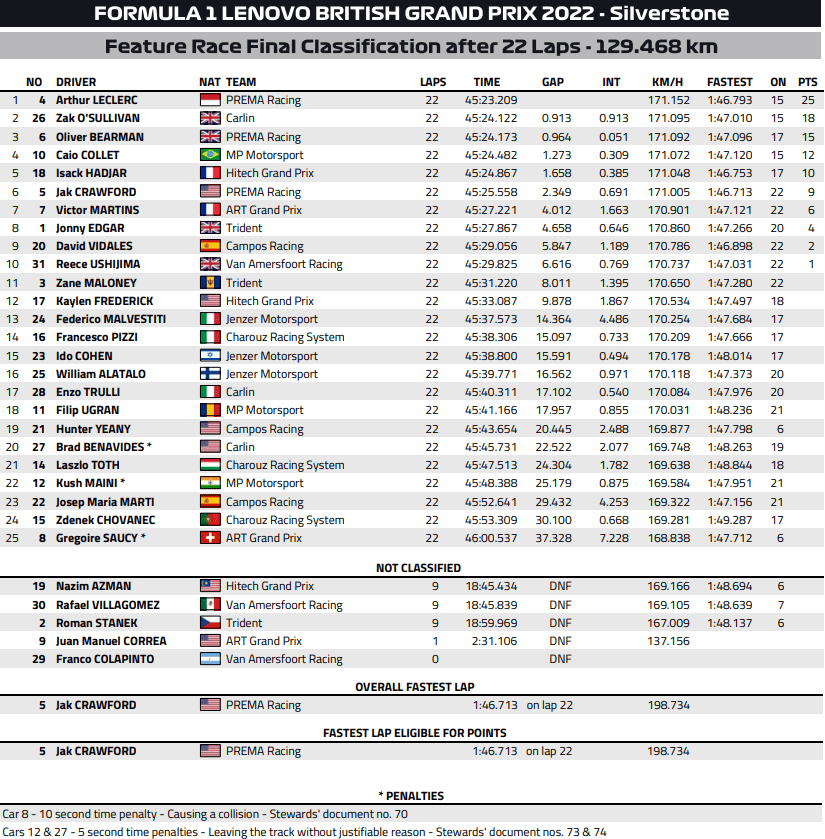 Here’s how sprint F2 and F3 race panned out