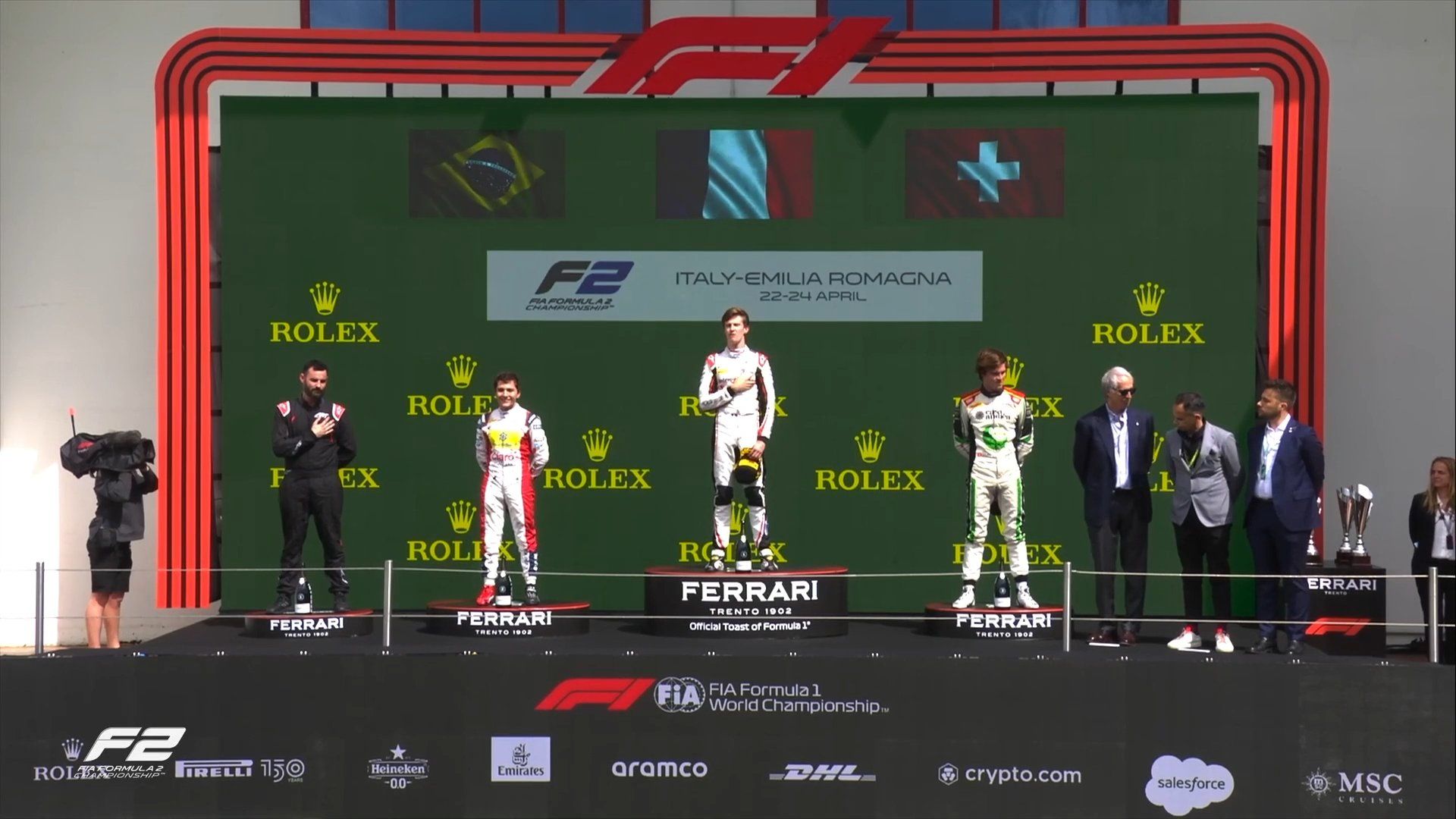 It was dry again for feature F2 race at Imola, as Hitech GP’s Juri Vips did not get away well from pole along with DAMS’ Ayumu Iwasa with both losing ground to be third and fourth behind race leader DAMS’ Roy Nissany and Campos’ Ralph Boschung.

The poor getaway from the front-row runners allowed others to pounce with both Virtuosi Racing’s Jack Doohan and Prema’s Dennis Hauger going for the same space in between the drivers in the middle but colliding as a result to end their races.

While Hauger stopped on track after he was sent onto the pit wall, Doohan limped back into the pits with safety car called out where Nissany led Boschung, Iwasa, Vips in the Top 4 from ART’s Theo Pourchaire and Prema’s Jehan Daruvala in the Top 6.

The Indian racer was the highest runner on the alternate strategy with the medium tyres, with Hitech GP’s Marcus Armstrong behind him in seventh leading Carlin’s Liam Lawson, MP Motorsport’s Felipe Drugovich and Carlin’s Logan Sargeant in the Top 10.

The re-start was a bit late from Nissany which was under investigation but was not penalised. Even before they could get going, Vips lost his rear after a small grass moment to spin out from fourth to call out the safety car again.

This time, most of the super soft runners pitted in an opportunistic move as Daruvala took the race lead from Armstrong, Lawson and Drugovich in the Top 4. Van Amersfoort Racing’s Jake Hughes was fifth from Virtuosi Racing’s Marino Sato on alternate strategy.

Campos Olli Caldwell – also under investigation for pre-race unsafe release – ran seventh from Trident’s Richard Verschoor and Calan Williams with Nissany lining up in 10th. He had Boschung on his tail but he was passed by Pourchaire for ‘net second’.

As things settled down, Nissany ran wide in the final corner to clout the wall on pit entry. It resulted in a Virtual Safety Car with the pitlane closed due to debris around it. The re-start was clean as Lawson was the first to pit from the front running cars.

Daruvala pitted a lap later with Armstrong doing so after him but the Kiwi had a slow stop which dropped him behind Lawson and even Hughes. Drugovich stayed out in front to lead from Sato and Caldwell, with Pourchaire in fourth being the net leader.

But the race order was more or decided after a late VSC-converted-into-SC for a crash for Lawson. Both Drugovich and Sato missed out to drop down the order after their late stop, with the race ending under the safety car period allowing for little change.

Pourchaire came through to win the feature F2 race with Charouz’s Enzo Fittipladi ending up second after passing both Sargeant and Boschung just before the safety car period. The Swiss racer remained third with MP Motorsport’s Clement Novalak in fourth.

Iwasa ended up fifth from ART’s Frederik Vesti as Sargeant was in anguish in seventh from Charouz’s David Beckmann, whereas Daruvala was ninth from Drugovich in the Top 10. The Indian driver scored an extra point for the fastest lap as safety car did not help him.

Overnight rain left the circuit slippery as the field of 29 exited the pit lane to head to the grid. It led to split strategies, with several drivers opting for wet tyres, though the majority decided to take the start on slicks. MP Motorsport’s Caio Collet was one beneficiary of the wet tyre gamble as he carved his way forwards from ninth on the grid to lead by almost four seconds in the space of a single lap, as Sprint Race winner Franco Colapinto also made gains.

On lap 2 the Safety Car was deployed following a collision between Reece Ushijima and Brad Benavides, with Francesco Pizzi rotating into the gravel by himself. That wiped out Collet’s sizeable advantage but both he and Colapinto ducked into the pits to take on slicks, leaving Trident pair Zane Maloney and Stanek – who had shared the front row of the grid and maintained position until being demoted by the charging Collet – back up front.

The man on the move at the restart was Josep María Martí; he had started 24th but on wet tyres surged forwards and swiftly grabbed the lead from Maloney – though it proved to be short-lived. Just one lap later the wet/dry crossover point had been fully reached and Martí relinquished the lead to Maloney, with Stanek and Bearman also swiftly relegating the Spaniard out of contention.

A second Safety Car period was called when Benavides’ difficult race ended in the barriers after he clipped the back of Rafael Villagómez’s car, and the subsequent restart period resulted in heartbreak for leader Maloney. As he slowly guided the field around for the restart he spun through the penultimate corner, leaving him out of contention, and as the pack continued it was Bearman who profited by breezing past Stanek along the pit straight for what was now the lead.

Maloney’s stricken machine necessitated the third appearance of the Safety Car, after which Bearman immediately stretched his advantage by pumping in the race’s fastest lap. However, Stanek soon responded by lowering the fastest lap and the Czech driver was quickly searching for a way past his opponent. Bearman defended the lead into Turn 1 on lap 22 but the next time around Stanek sauntered past the Briton along the main straight to grab an advantage that he would not relinquish.

Bearman’s reduced pace meant a three-way tussle for third became a four-way fight for second, which soon extended to five cars as a rapid Arthur Leclerc – who had battled his way through from 21st on the grid – also joined the party. Crawford overhauled Bearman for second and Grégoire Saucy also strived to find a way past the Ferrari-backed junior as the race entered its closing stages.

Saucy went around the outside of Bearman at the penultimate corner but the pair clashed, leaving Saucy facing backwards with a broken car, while the delayed Bearman dropped to fourth as Hadjar snuck through to pick up third. Leclerc’s recovery concluded in fifth, making it a gain of 16 positions from his grid spot, while Kush Maini claimed sixth with Zak O’Sullivan bouncing back from an early spin to take seventh.

Kaylen Frederick cross the line in eighth, with David Vidales another big mover as he took ninth from 27th on the grid. Ido Cohen picked up his first point in the category as he rounded out the top 10, narrowly ahead of Victor Martins, who gamely recovered to 11th after tumbling to 29th and last at the start.