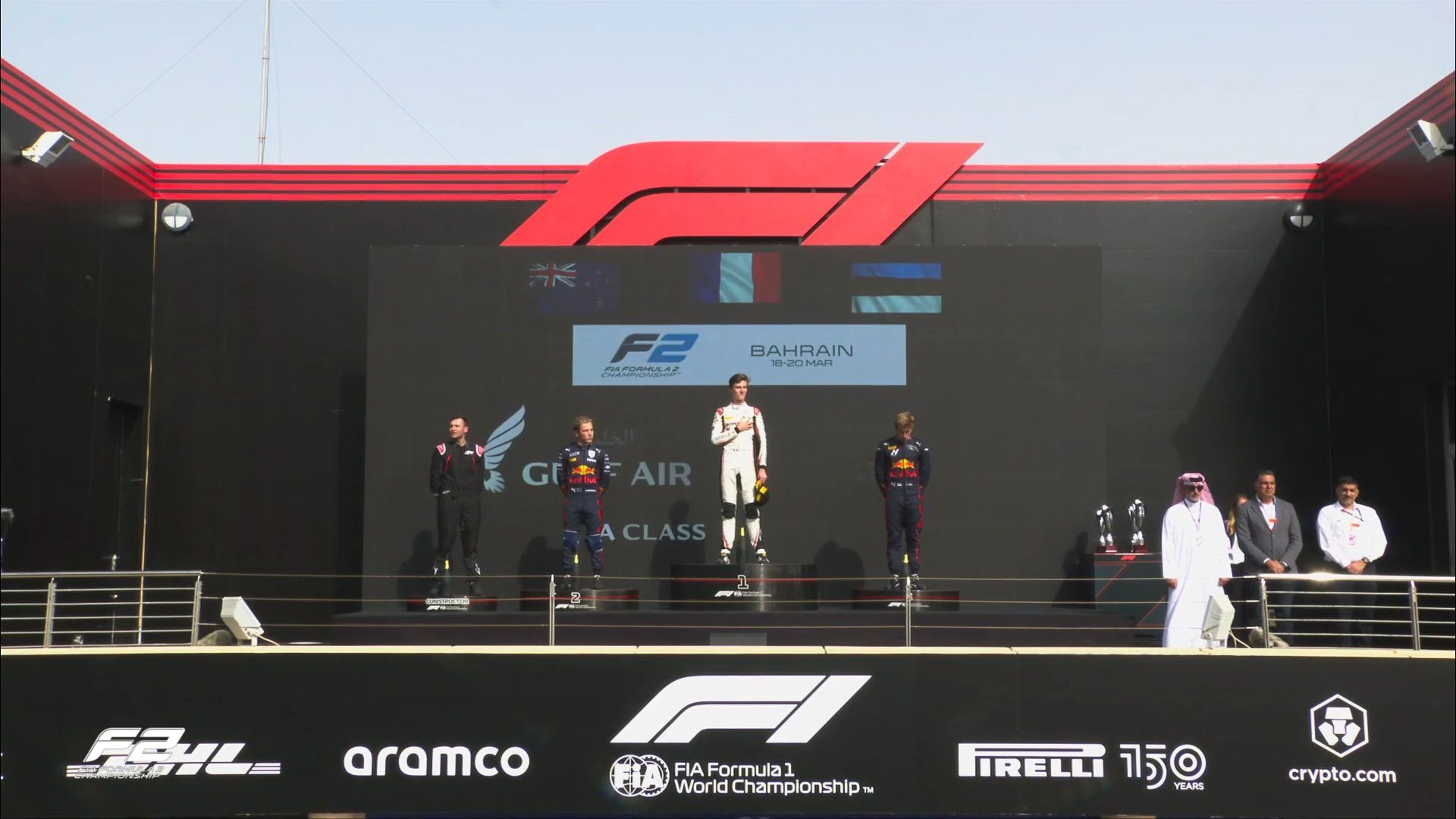 Virtuosi Racing’s Jack Doohan lined up on pole position for F2 Feature Race of the Bahrain GP weekend, but wouldn’t retain the advantage into Turn 1. The Australian suffered debilitating wheelspin off the line which allowed Hitech’s Juri Vips to take the lead. But with him would go fast-starting Campos Racing’s Ralph Boschung who’d orchestrated a storming getaway to draw alongside Vips on the outside into the first corner.

Vips would retain the lead until the Safety Car came out on the second lap after Mercedes junior and ART Grand Prix driver Frederik Vesti spun and stalled in Turn 1. On the restart, Boschung decided against defending from the charging Doohan into the first corner, with the Virtousi driver diving down the inside and taking P2.

ART Grand Prix’s Pourchaire soon followed him through and Lawson made a half-hearted attempt into Turn 8 on the struggling Boschung. Whoever could work their tyres quickly gained positions on both the original start and the restart. Several laps later DAMS’ Ayumu Iwasa made a spirited move on sprint race winner Richard Verschoor before Hitech GP’s Armstrong passed Pourchaire for P3, in a move which put his team in a 1-3 position.

The mandatory pit stops were in full flow when race leader Vips made his stop on Lap 14, with the Estonian suffering from a disastrous pit stop, dropping to a provisional P13 when he was eventually released back onto the track. Virtuosi Racing would bring in Doohan a lap later who came back out alongside Pourchaire into Turn 1. The two made slight contact between rear right and front wing, but it was enough to ruin Doohan’s chances of an almost certain victory with the Virtuosi needing a new front wing.

He would visit the pit lane for a third time on Lap 17 for brand new tyres, dropping him to P20 and last place. Last-place-starter Iwasa remarkably lead for a few laps having left his pit stop later than others, but it was Pourchaire in the net-lead. Prema’s Jehan Daruvala would be forced off the track in spectacular fashion into Turn 5, just before a subsequent pit stop to change tyres dropped him to P19.

Vips would take Boschung for P4 as the race settled into its second stint, soon passing MP Motorsport’s Felipe Drugovich who’d committed to an early stop and undercut strategy. With ten laps to go, Lawson made a straightforward move on new tyres on Drugovich for P2. Defending lap-after-lap was Nissany, frustrating Verschoor with increasingly daring defensive moves.

A Verschoor-Sargeant-Sato-Daruvala-Fittipaldi train quickly formed, with Verschoor spinning in the fight and bringing out the safety car once again. A flurry of cars entered the pit lane, including Prema’s Dennis Hauger. Upon pulling away from the box, the Red Bull junior’s front left wheel wasn’t securely attached and immediately came off the car and rolled to a stop in a gap in the pit wall.

Unbelievably, the stricken Calan Williams came into shot seconds later having suffered exactly the same fate, but with the Trident coming to a stop in the fast lane. Pourchaire lead the way at the second restart on what became the final lap of the race, and immediately Olli Caldwell spun into the gravel on the inside of Turn 1, ending a forgettable race for the British Campos Racing driver.

The final results after a spectacular race of strategy, intent and aggressive racing have Lawson in P2 and Vips recovering from his slow stop and rounding out the podium places. Boschung came home P4 followed by Armstrong, Drugovich, Sargeant, Nissany and Jake Hughes in P9. Doohan topped off a valiant drive with P10 after Amaury Cordeel received a time penalty, having finished ninth on the road.

Although he produced a surprise result in Qualifying with pole position, it was arguably going to be a taller task for Colapinto to hold onto the victory as he continues to acclimatise himself to his new F3 surroundings. However, in the opening stages of the race, the Argentine looked comfortable out in front.

He was forced to deal with a Safety Car restart, which was required after Francesco Pizzi and Zane Maloney came to a stop on the circuit on the opening lap. Pizzi was nudged by Maloney, who was dropping through the field due to a mechanical issue following the opening corners. Caio Collet was also a victim of the first lap, as he broke his front suspension while driving over a kerb at Turn 7, having taken his car off the circuit to avoid potential contact between his rivals.

At the Safety Car restart, Martins overtook Roman Stanek for P2, but the Trident driver would soon be eliminated from contention after coming together with Alex Smolyar. Stanek suffered a puncture and was forced back to the pit lane for a new set of tyres. A brief Virtual Safety Car was called on Lap 6 after Hitech Grand Prix’s Nazim Azman was spun around following contact. At the restart, Leclerc made swift work of Saturday race winner Isack Hadjar and Campos Racing’s David Vidales to place himself in the top five.

Further ahead, Juan Manuel Correa appeared to have rapid pace and he moved into the top three after overtaking Smolyar, with the latter also soon finding himself behind the charging Leclerc. There was then heartbreak for Hadjar, who suffered a puncture while battling Smolyar for fifth place. Leclerc progressed into the top three after moving past Correa, while behind and outside the points, his two PREMA teammates Jak Crawford and Oliver Bearman began to make headways into the top 10, progressing through a stream of 15 or so cars that were separated by just a handful of seconds.

Having hounded Colapinto for several laps, Martins made the crucial overtake on Lap 15, and three laps later, the pole-sitter found himself in third as Leclerc moved ahead. Although Leclerc was able to slightly narrow the gap to Martins, he couldn’t cut it enough to challenge for victory in the final laps.

Bearman and Crawford continued to progress further into the top 10 and at the chequered flag, they found themselves sixth and seventh, respectively. Colapinto was demoted back to fifth due to his time penalty, with Saucy and Correa gaining a spot each to classify third and fourth. Vidales was eighth, while Williams Alatalo scored his first points of the season in ninth. American Kaylen Frederick rounded out the top 10 to take the final point on offer.

More to come with results