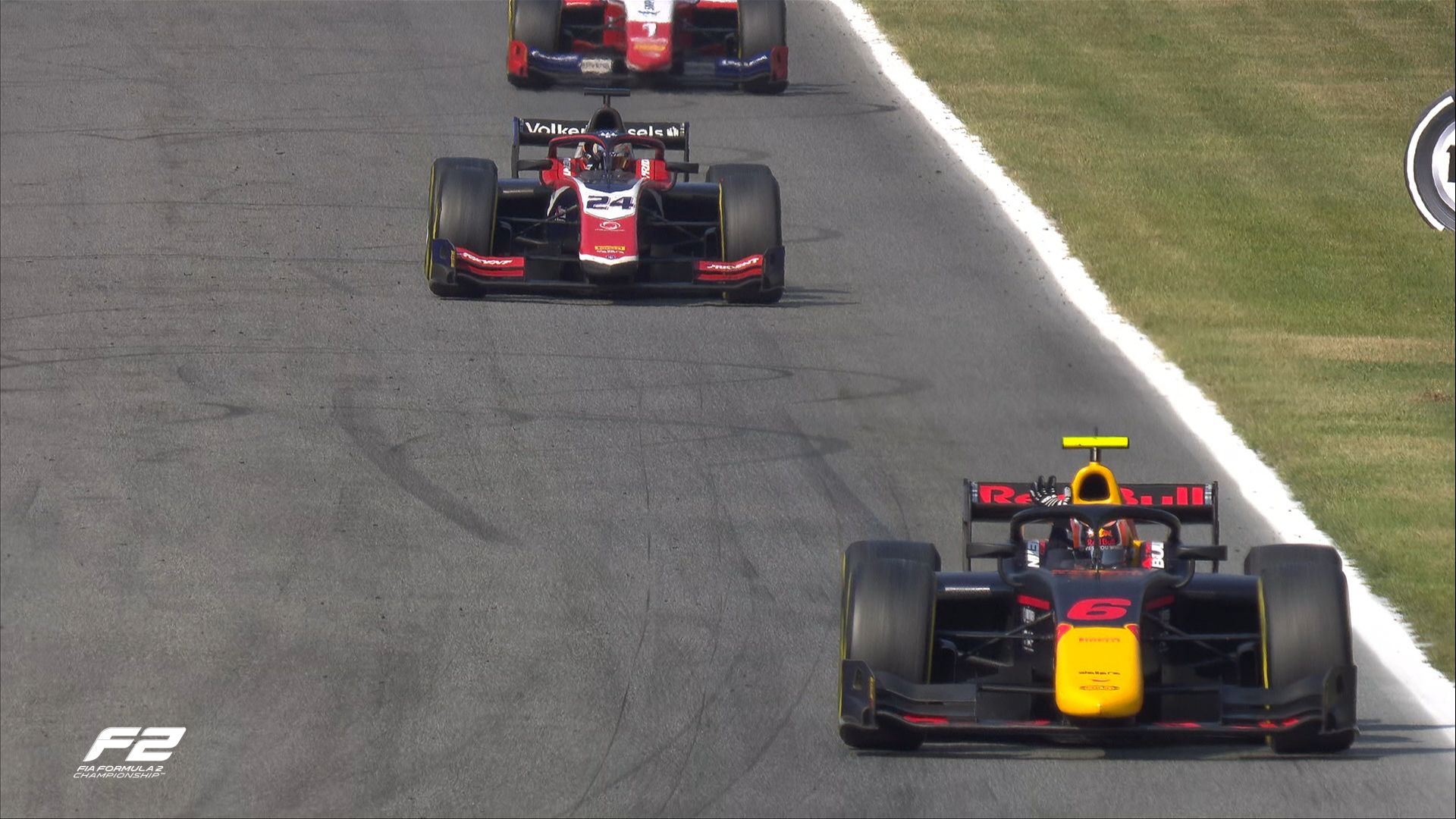 ART’s Theo Pourchaire took the win in Race 1 of Monza F2 weekend, whereas Carlin’s Jehan Daruvala had his chance in Race 2.

Vips was able to capitalize on his great start and snatch the lead from Beckmann into Turn 1, with ART Grand Prix’s Theo Pourchaire attempting a move on Ticktum, behind, on the outside of Turn 3 on Lap 2. The Frenchman ran wide and the Brit locked up, as the Carlin driver was clipped from behind by UNI-Virtuosi’s Felipe Drugovich, spinning him, which ended his race and brought out the safety car.

Not only there was damage for Drugovich, but also Campos’ Ralph Boschung, who required a front wing change. Charouz Racing System’s Enzo Fittipaldi, meanwhile, was handed a 5s time penalty for the incident between him and Trident’s Mario Sato on Lap 1. Under the safety car, however, the Brazilian retired in the pits.

The Japanese also hit DAMS’ Marcus Armstrong, but was let off due to Fittipaldi’s move. After a brief safety car period, F2 went racing on Lap 5 and Vips was able to get a comfortable re-start at the front. His Hitech GP teammate Liam Lawson attempted an overtake on Pourchaire for P3 and damaged his front wing. There was a big spin for Drugovich that brought out the Virtual Safety Car.

The UNI-Virtuosi driver spun on his own and found himself in the wall. PREMA’s Robert Shwartzman, meanwhile, capitalized on Lap 7 as he made a move on teammate Oscar Piastri for P6, succeeding in doing so. But the Australian ran wide on the gravel and also let past Roy Nissany’s DAMS, leaving him in P8.

Carlin Racing Jehan Daruvala also saw an opportunity with Piastri on Lap 8, as the two battled it out, while the Indian got the position, Piastri reclaimed it a few corners later. Lap 10 saw a big lockup from Beckmann in P2 into Turn 1, having to use the escape road which gave Pourchaire the push from P3 into P2.

A second safety car was deployed after a spin for Nissany, who stopped on the track. Shwartzman was handed a 5s time penalty for leaving the track during the official race start, while Boschung was under investigation for his pit stop under VSC. After his brief fight with Piastri, Daruvala was forced to pit as well for front wing damage.

Lap 14 saw the re-start, with Vips, Pourchaire, and UNI-Virtuosi’s Guanyu Zhou getting away well in the Top 3. Behind them, Beckmann was passed by Shwartzman for P4, then passed again by MP Motorsport’s Lirim Zendeli for P5, leaving the reverse pole sitter in P6.

Vips maintained his lead until Lap 16, where Pourchaire took a leap down the inside of Vips in Turn 1, managing the overtake and taking P1 from the Estonian. Able to maintain this lead, as Lap 17 saw him build a gap of 3.6 seconds to Vips who was in P2.

Vips unlucky, locked up into Turn 1 of Lap 18, that forced him into the escape road and down to P5 right behind ART Grand Prix’s Christian Lundgaard. The bad luck continued for Vips in Lap 19 as Piastri managed to overtake the Estonian for P5. A nightmare race drop for Vips as he was passed by teammate Lawson and Trident’s Bent Viscaal, leaving him in P8 after having started in P2.

There was late yellow flags in Sector 2 for Zendeli, after he stopped at the side road of Turn 4, with the stewards putting him under investigation for not leaving the car in neutral when he came to a stop. The final lap and chequered flag made it the second F2 race win for Pourchaire, with Zhou right behind him in P2 and Lundgaard in P3 after Shwartzman’s penalty was applied, which dropped him to fifth.

It helped F2 points leader Piastri to end up P4 and maintaining his lead over Zhou. With Shwartzman in sixth, Lawson gained another place to be fifth, as Viscaal and Vips rounded out the points position in seventh and eighth. The Estonian managing to hold on to eighth despite late attempts from Daruvala, who was ninth, with Beckmann in 10th. 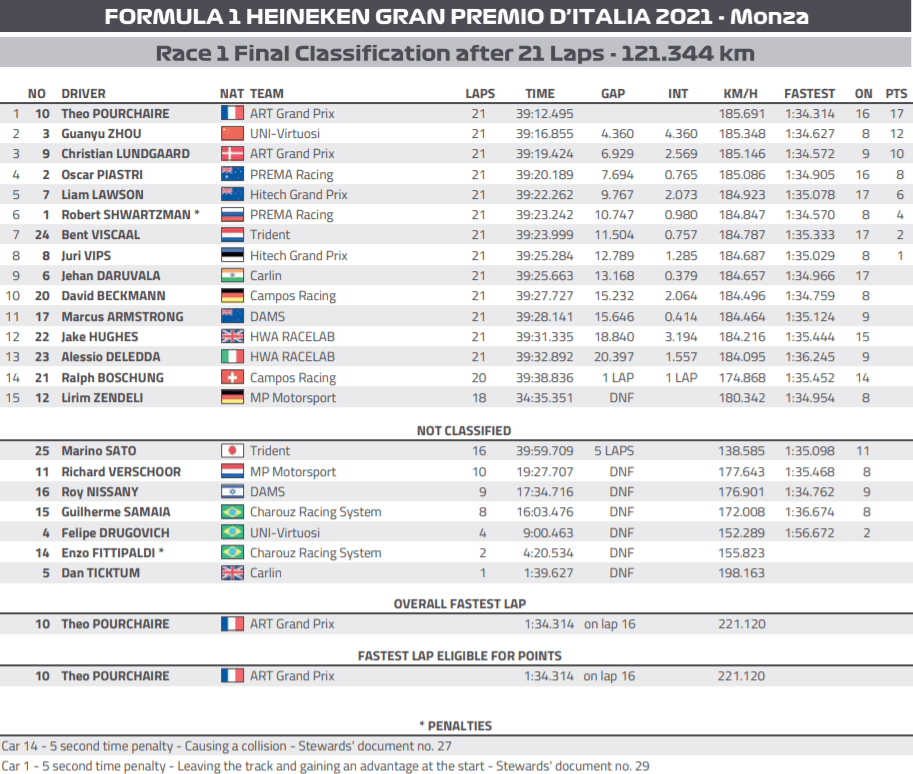 Beckmann started on pole for the second time in Race 2 of the F2 Monza weekend after finishing 10th in Race 1, with Daruvala joining him in the front row in P2 and Vips in P3. The Indian had an amazing start as he overtook the German into Turn 1, as Viscaal moved up a position into P3, dropping Vips to P4.

A spin for Lundgaard in mid-pack brought out the yellow flags, but the Dane was able to keep the car running, and continue the race. Lap 3 was important for Pourchaire, as he overtook Zhou and Piastri to take seventh. It was an incredible racing by the ART and the Prema cars, where Pourchaire was still able to retain and defend for the P7 position.

There was a Virtual Safety Car in Lap 4 as the two HWA RACELAB cars collided with Jack Hughes ending up into the wall and out of the race, whereas Alessio Deledda continued the race. The incident closed the pitlane entry and is currently being looked at by race control.

The green flag for Lap 5 saw Piastri attacking for P7, but Pourchaire had been able to defend well, with Zhou attacking the Australian from behind. Meanwhile, DAMS’ Nissany was handed time penalty for the incident with Lundgaard.

The Lap 10 saw Shwartzman with his elbows out trying to overtake Vips. It was on Lap 11 that he was able to see it through and make the move on the Estonian for P4 by taking the outside line. Vips fell down further to P6 on Lap 12, when was overtaken by teammate Lawson.

Just ahead, Beckmann and Viscaal were going side by side for that P2 position on Lap 13, the Dutch driver almost succeeding in completing the move, but Beckmann was able to retain his position. Behind, Piastri finally had the opportunity to overtake Pourchaire and took his chance to go up into P7.

Pourchaire’s battle was far from over, however, as Zhou’s was on his tail for P8 on Lap 15. Zhou was able to take P8 on Lap 17, as Pourchaire locked up into the chicane and was forced into the escape road and lost his position, moving the Chinese driver closer to his championship rival, Piastri in P7.

Pourchaire dropped further down to P10 as Boschung overtook him in Lap 18. At the front, while Daruvala led comfortably, the Lap 19 saw Beckmann locked up into the chicane, forced into the escape route and sent Viscaal into P2. The German driver went into defence mode against Viscaal, that the race control deemed as unsafe rejoin, with them giving him the black and white flag towards the end.

Shwartzman, P4 in Lap 20, was close to Beckmann and succeeded in overtaking for the podium position from the Campos Racing driver, which put him in P3. Lawson was also able to overtake Beckmann during the last lap for P4. The chequered flag marked the first victory for Daruvala this season in F2, along with Viscaal’s best finish in P2. Shwartzmann was able to hold out to get a podium finish in P3.

Lawson ended up P4, with Beckmann P5 and Vips hanging on to P6 despite losing pace earlier in the race. Piastri was P7 and Zhou in P8 rounding off the points for Sprint Race 2, as Boschung and Pourchaire rounded out the Top 10 positions. 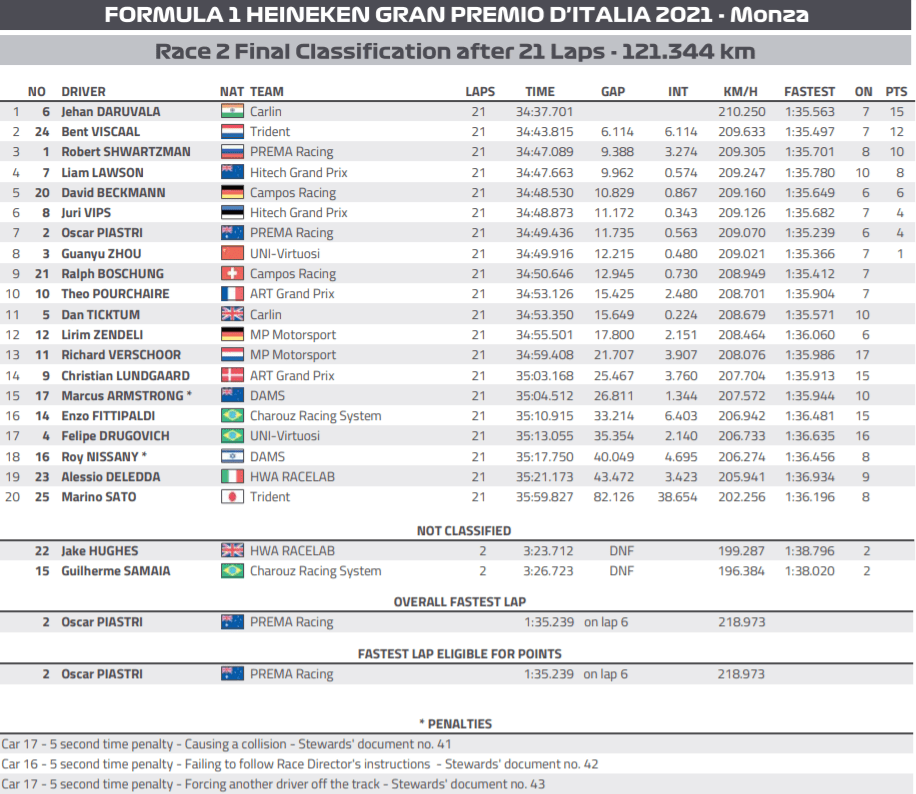