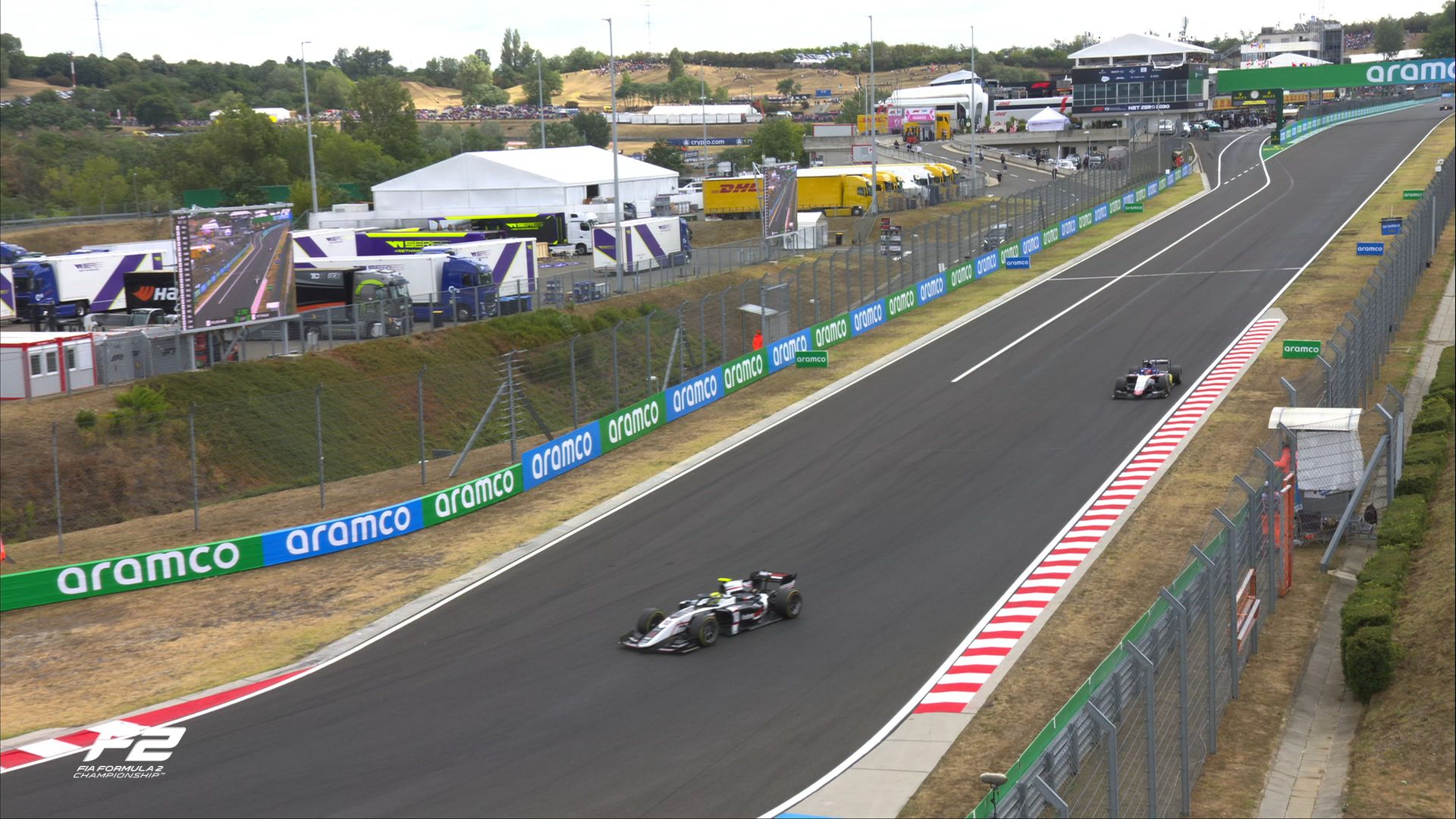 Theo Pourchaire gained in standings after feature F2 race win at Hungaroring from Enzo Fittipaldi, as Alexander Smolyar won from pole in F3.

Even with the clouds overhead, it was a dry start to feature F2 race at Hungaroring, as pole-sitter Ayumu Iwasa dropped to third in his DAMS with Hitech GP’s Marcus Armstrong taking the lead from fast starter ART’s Theo Pourchaire.

The American lost further on the medium tyres, with Vesti on the same tyres losing to Fittipaldi too. The Dane though was handed a 5s penalty for forcing the Brazilian off track. F2 sprint winner Jack Doohan retired after issues in his Virtuosi car.

With the soft tyres starting to drop, Drugovich started the pit stop train as Armstrong lost the lead amid this to avoid unsafe release in the pits. Pourchaire took the net lead from Fittipaldi, who gained places after a late stop from Charouz.

Iwasa was net third from Drugovich in their chase of Fittipaldi. At the front, Vesti had the lead of a F2 feature race on his medium tyres with Vips, Verschoor in the Top 3 from Hauger, Carlin’s Liam Lawson and Sargeant in the Top 6.

Things started to settle down in the field as Hauger was the first of the medium runners to stop. In terms of track position fight, Armstrong was the one to gain on Drugovich with the Brazilian started to struggle on the tyres after his early stop.

Both Vesti and Vips eventually made the stop but they struggled to get temperature into it and locked-up heavily. With Lawson pitting, Pourchaire finally took the feature F2 race lead from Fittipaldi, Iwasa, Armstrong and Drugovich in the Top 5.

Despite few spots of rain, the feature F2 race ended in dry conditions with Pourchaire easing off to win to gain on Drugovich in the standings. Fittipaldi made it two podiums in second, with Iwasa rounding out the podium positions.

Vesti made the alternative strategy work to be fourth from Vips, Armsrtong, Lawson, Verschoor as Drugovich dropped to ninth while Sargeant rounded out the Top 10 from Prema’s Jehan Daruvala who fended off Campos’ Olli Caldwell.

Maloney got a great launch but was immediately covered off by the pole sitter. The Trident driver tried a move around the outside at Turn 1 but was unsuccessful. It allowed Bearman to get a great drive on corner exit to make it three-wide into Turn 2. The PREMA Racing man got too deep on the brakes and had to settle back into third.

Behind that trio, Maini climbed up to fourth but was closely watched by Crawford after the pair had cleared Grégoire Saucy off the line. The red and white PREMA claimed P4 on the run to Turn 4 while Reece Ushijima was on the move too, rising up to ninth after Lap 1 from P19 on the grid.

Championship leader heading into the Feature Race Isack Hadjar meanwhile was going backwards. He dropped down to 18th after being forced to take avoiding action at Turn 2 on the outside of the corner.

Arthur Leclerc retook ninth position following a slow start, passing Campos Racing’s David Vidales at the final corner on Lap 8 after the Spaniard ran wide and off the circuit. By Lap 10, the wet patches of track were few and far between and the field was seeking out any damp sections to cool the wet tyres. Hadjar’s race went from bad to worse as Juan Manuel Correa relegated the Hitech driver down to 19th at Turn 12, diving down the inside of the Frenchman to seize the position.

Ushijima was desperate to pass Vidales for P10, but the Van Amersfoort Racing driver couldn’t work out a route through. In trying so many different lines, he lost momentum out of Turn 1 on Lap 13 and Roman Stanek behind took full advantage, taking 11th at Turn 2 on the inside.

Leclerc continued his comeback at the expense of Collet on the exit of Turn 1 with 10 laps to go while Francesco Pizzi was the first driver to opt for slick tyres. Correa followed him in on Lap 16 while there were still fastest sector times coming in from Leclerc on his full wets.

The fight for 10th continued and Stanek took the place from Vidales, albeit after running out of room on the exit of Turn 1 and completing the move as he rejoined the circuit. He ultimately handed back the position but crucially kept Ushijima behind him.

Leclerc was up to seventh, benefitting from Saucy running off the road at Turn 5 after being unsighted by Jonny Edgar who had fitted the slick tyres but was struggling to fire them up as that gamble appeared to be a step too far on the yet-to-dry track.

The PREMA driver wasn’t done yet, and with five laps to go he took 6th from Championship rival Victor Martins after setting up a great switchback through the middle sector. Having started the move three corners earlier, Leclerc made a dive down the inside of Turn 12 work and avoided contact to seal the position. Hadjar meanwhile pitted from 19th and fitted the slick tyres on Lap 20 just as the crossover point arrived.

Correa was flying on his slick tyres and lapping seconds quicker than the race leaders. Edgar displayed just how much quicker the dry tyres were by unlapping himself from Maloney, Bearman and Crawford as they fought for second.

O’Sullivan was another to have swapped the wets for dry tyres down in 17th and was 10 seconds quicker than race leader Smolyar on Lap 22. He passed the ART Grand Prix car of Correa to be the highest-placed driver on the slick tyres. The Carlin cleared the VAR trio to move up to 12th in the space of a single sector. He made it into the top 10 on the penultimate lap and was quickly catching those ahead. He then dispatched both ARTs of Martins and Saucy in one corner and wasn’t finished yet.

Smolyar was far enough clear of anybody that he could afford to coast home and take the victory with a triumphant 5.560s lead. Maloney just about held on to second after a drag race with Bearman out of the final corner, but O’Sullivan was the star, finishing fourth by the chequered flag after dispatching Maini and both of the PREMAs of Leclerc and Crawford on the final lap.

Crawford held onto a top five finish and was followed by Correa in sixth, who also made great use of his slicks. Maini was seventh ahead of Leclerc, Saucy and Collet to round out the top 10.