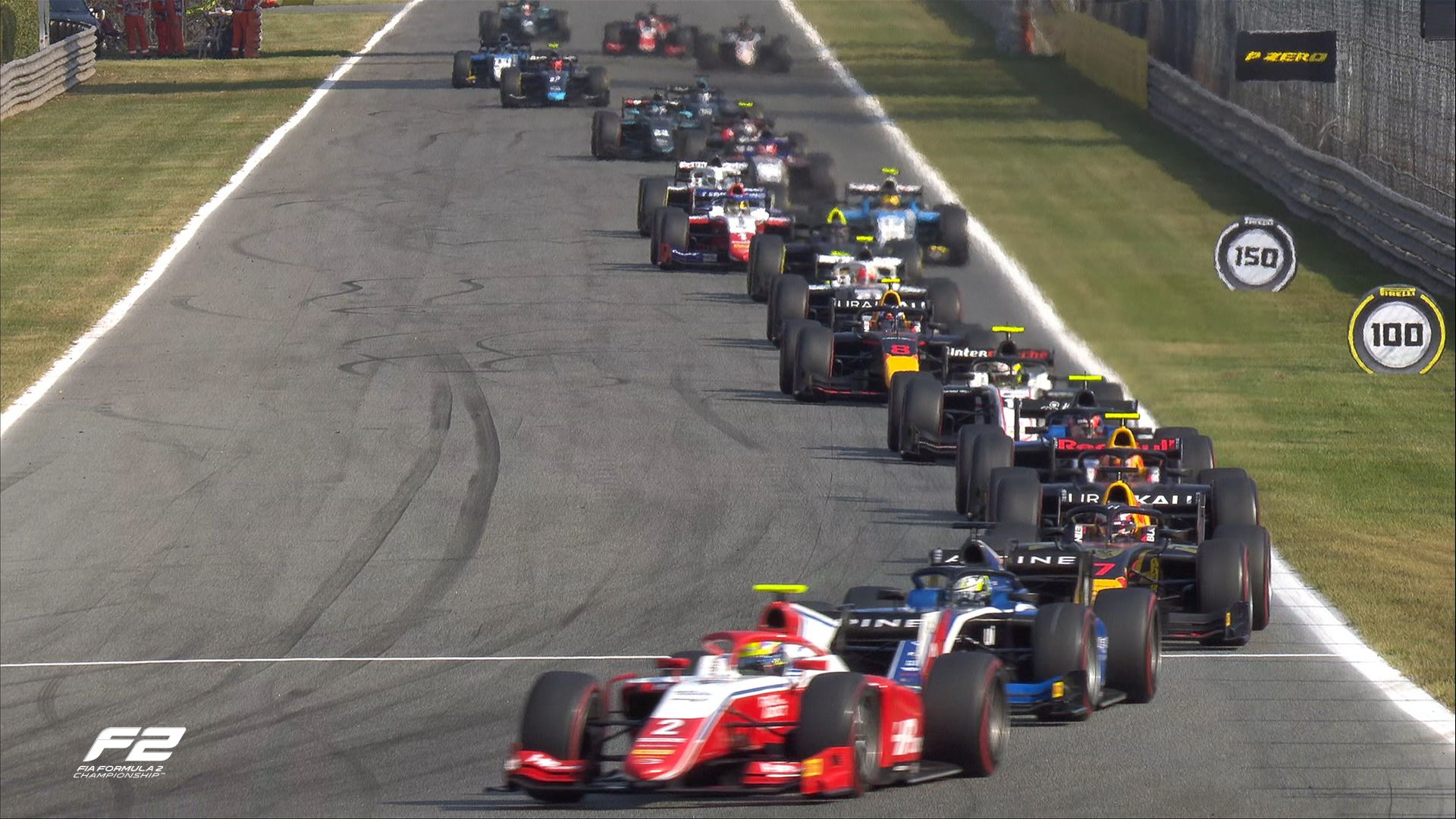 Prema’s Oscar Piastri started from pole in the feature F2 race at Monza after Friday’s qualifying, with Carlin’s Jehan Daruvala in P2, and UNI-Virtuosi Racing’s Guanyu Zhou in P3. The Australian made a good start that allowed him to hold onto his lead through Turn 1, however, the Indian was not as lucky as Zhou and Hitech GP’s Lawson passed him for second and third respectively, leaving the Carlin driver in fourth.

There was yellow flags for Charouz’s Guilherme Samaia after his spin, where he ran over the kerb to hit the barriers. It resulted in a VSC first but the race director then deployed a full SC, as the car was stranded on the middle of the track. The re-start on Lap 5 saw Piastri lead the way from Zhou and Lawson. UNI-Virtuosi’s Felipe Drugovich managed to get past Daruvala on the chicane to take P4, but the Indian fought back to retake the place.

Just when he did, Lawson went all elbows out as he dived around the outside of Zhou and moved up into P2 on Lap 6. There was another SC on Lap 8 as Juri Vips’ Hitech Grand Prix car slowed down on track, seemingly having a problem. He was also clipped by Carlin’s Dan Ticktum, who picked up damage.

Under the SC, the race of Trident’s Marino Sato also came to an end after pulling to the side of the track with car issues. With most of the net leaders pitting, the green flag on Lap 11 saw Ticktum lead the cars on track. Both Zhou and Daruvala gained on Lawson in the pits, as the Indian tussled with the Chinese on Lap 12. He succeeded in doing so in the chicane, but he went off track in doing so. The Carlin racer gave back the place.

Moments after giving it, Daruvala tried a move on Zhou again at Turn 1, as they had another moment, where the Indian seemingly hit the Chinese driver, who went off in the chicane. The move was under investigation, but was cleared by the stewards. Up ahead, Piastri cleared the non-stoppers one by one, leaving on Ticktum ahead.

There was trouble for Drugovich, meanwhile, in the pits, which dropped to back of the pack on Lap 16, with host of radio shenanigans. As Ticktum led Piastri and Zhou, the Lap 18 saw Daruvala lock up in Turn 1, forcing him onto the escape route, which allowed Pourchaire to narrow the gap to the Carlin driver, who had non-stopper Lundgaard ahead of him.

They had Lawson in the fight too. Before Daruvala could clear Lundgaard after multiple attempts, the Lap 21 saw Pourchaire succeed in snatching fourth from the Indian at Turn 1. Moments later on Lap 22, Lawson was forced to slow down on the straight and stop after his fire extinguisher went off in the car, with the safety car was deployed.

Ticktum pitted under safety car on Lap 23, and dropped down the grid positions into P11, with Piastri reclaiming P1 and his lead. However, Piastri still did have Zhou, in P2 to worry about with only a 0.7 second gap. The green flag on Lap 25 saw action straight up as Piastri launched his PREMA down the straight, but locked up in Turn 1, and gave way for Zhou right beside him, however, the Australian was able to see it through and stay ahead.

That was not all for Lap 25 though as Ticktum and Boschung made contact, which sent Ticktum wide and off at the chicane. The Brit overtook three cars off-track, which was investigated by race control but no penalties were given. The Brit by Lap 27 was up six places from P11, and had sight on teammate Daruvala for P4, which he was able to see through. He then overtook Pourchaire for P3 on Lap 29.

A late safety car on Lap 30 was deployed after an incident between Trident’s Bent Viscaal and Charouz’s David Beckmann, which held off Ticktum’s charge as the F2 race ended behind it. Piastri secured his first feature F2 race win after passing the chequered flag, with Zhou right behind him in P2, and Ticktum in P3 – on the podium after his drive from P11.

Behind him, Pourchaire ended up P4, with Daruvala in P5, ahead of Prema’s Robert Shwartzman in P6. It was double points for MP Motorsport teammates Richard Verschoor and Lirim Zendeli in P7 and P8, respectively, as DAMS’ Roy Nissany and Marcus Armstrong rounded off the points for the feature race.

Piastri’s victory is incredibly important for his F2 Championship title fight and the points scored today help in extending the lead from Zhou. However, the Chinese driver finished P2 in the race which means the battle is still alive going into Sochi.

UPDATE: Post-race, the stewards handed penalties to both Boschung and Beckmann for causing a collision. The former hit the rear of Drugovich at Turn 4, as the stewards found him wholly to be blamed for the incident. He was handed a 10s time penalty, which dropped him to 14th.

Beckmann, meanwhile, was found guilty of colliding with Viscaal at Turn 1. Considering he retired from the race, the German is handed a 5-place grid drop of Sochi weekend. There was also a fine of 500 euros for Charouz for failing to adhere to the time penalty rule on Fittipladi’s side during his pit stop. The team has to wait for 5s to elapse before working on the car, but the front jackman raised the car before it due to miss-communication.

In another investigation, the stewards let off Lawson for not following their procedure when he stopped near the pit exit. Due to the fire extinguisher blowing off, the Kiwi was not able to see anything and the car shut down, which is he stopped at the first moment and got out. The final investigation saw a disqualification of Verschoor after the combined weight of the car and the driver after the race was found to be lower than the minimum weight.

The team noted that the calculations they made on the expected combined weight were not correct and Verschoor did not pick up enough tyre debris post-race too. His DQ meant, Zendeli was promoted to seventh, with Nissany in eighth, Armstrong ninth and Lundgaard 10th – with the Dane taking the final point. 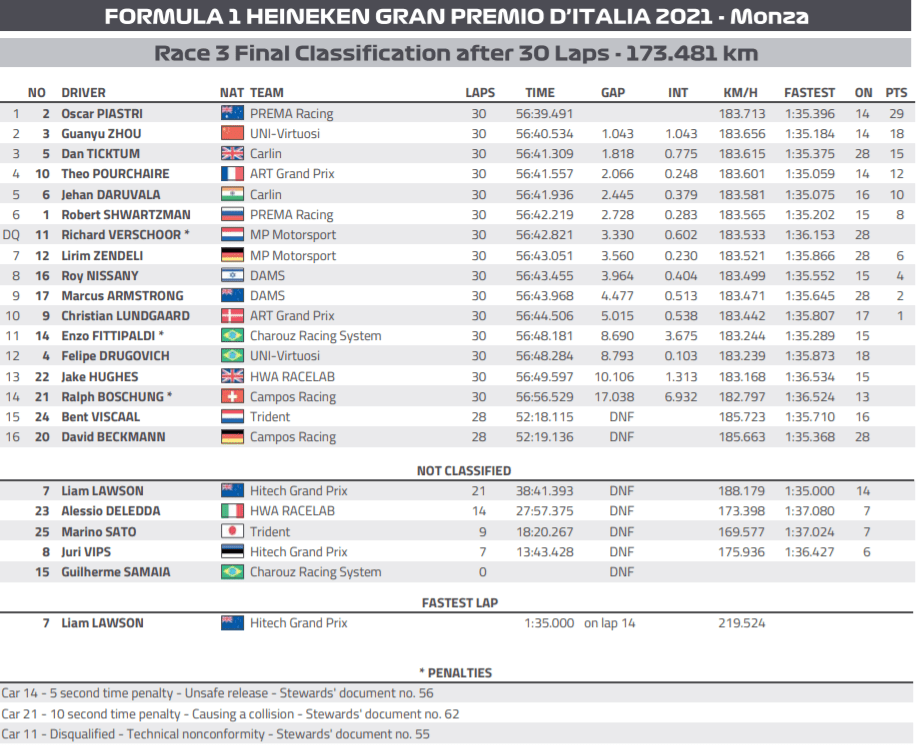 Here’s how the first two F2 races at Monza went