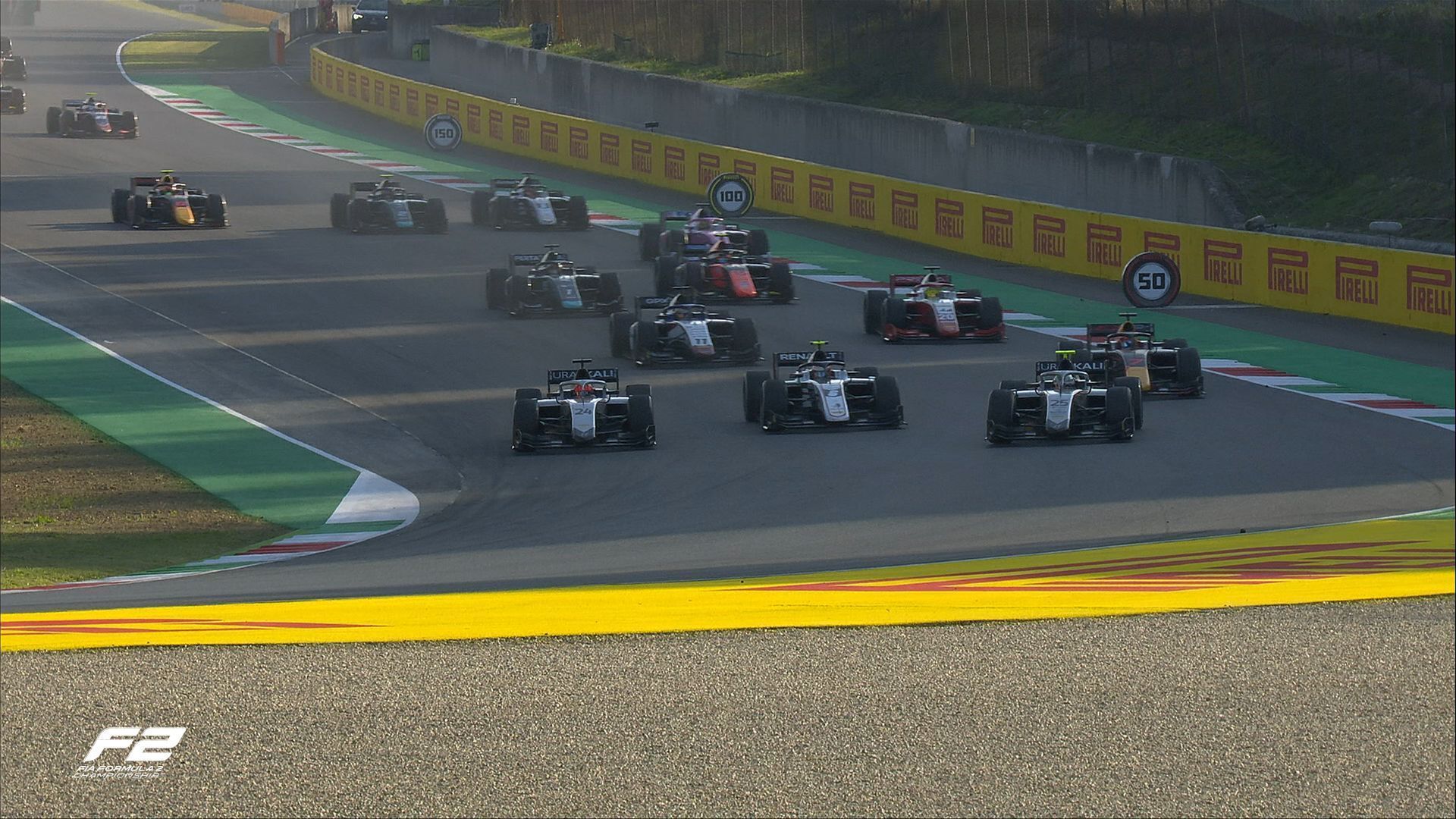 ART’s Marcus Armstrong steadied in fourth with MP Motorsport’s Felipe Drugovich fifth as Campos Racing’s Jack Aitken making up places to be sixth as Carlin’s Jehan Daruvala dropped to eighth from Yuki Tsunoda and DAMS’ Juri Vips in the Top 10.

Ahead of the start of the race, though, Lundgaard and Prema’s Robert Shwartzman were put under investigation for a pitlane incident. The Dane led the way comfortably as Durgovich cleared Armstrong for fourth with Ilott clearing Aitken.

Behind, Tsunoda managed not only get past Daruvala but also Aitken, with the Indian losing multiple places then. The soft runners started to pit as the alternate runner saw Hitech GP’s Nikita Mazepin leading from DAMS’ Vips after Russian cleared the Estonian.

Shwartzman was third from UNI-Virtuosi Racing’s Guanyu Zhou, Prema’s Mick Schumacher, and Charouz’s Louis Deletraz in the Top 6 as they went down to until the Top 11 on that strategy. The net lead, though, remained with Lundgaard.

However, Ticktum was beaten by Ghiotto. The Italian got ahead in the pit stop but the Brit came back at him on track only just, with the Hitech GP driver retaking second from the DAMS driver, who had Ilott and Armstrong behind.

A slow stop for Drugovich dropped him behind Tusnoda and Aitken, while he was ahead of Daruvala. While Lundgaard got through the field, among the alternative strategy drivers, Shwartzman made an early stop on Lap 17 but he eventually retired due to an issue.

With the alternate strategy drivers pitting, Lundgaard was back into lead from Ghiotto and Ticktum as Tsunoda made a crucial pass on Ilott for fourth with Armstrong sixth from Drugovich, Aitken, Daruvala and Zhou in the Top 10 in the closing stages.

The race got neutralised by a VSC period when HWA Racelab’s Giuliano Alesi stopped on track. It turned into a full safety car as Amrstrong, Drugovich, Daruvala and Charouz’s Pedro Piquet pitted the second time to change onto the soft tyres.

It was Ghiotto second as his teammate Mazepin moved to third from eighth as Tusnoda stayed fourth after tangling with Ticktum. The Brit was around the outside at Turn 1 when their wheels touched, sending the DAMS driver onto the run-off.

Deletraz was fifth with Schumacher sixth as the German was involved in a three-way tangle with Zhou and Aitken, which had the Chinese and the Brit-Korean racer retiring as the safety car was deployed again to clear the two F2 cars.

Vips was upto seventh with Drugovich eighth, HWA Racelab’s Artem Markelov ninth and and angry Ticktum 10th. The second re-start worked for the Hitech GP drivers as Mazepin stormed into the lead to win the feature F2 race at Mugello.

Teammate Ghiotto managed to fend off Deletraz on the line to make it a Hitech GP 1-2 as Drugovich ended up fourth from new F2 points leader Schumacher, who managed to clear Lundgaard for fifth. The Dane had to settle for sixth from first-time scorer Vips.

The Estonian also had a clash with Tsunoda at Turn 1 to take that position with the Japanese finishing eighth from Markelov and Armstrong. However, the Carlin racer was handed a five-second time penalty for causing a collision.

He dropped to 16th as a result, allowing Markelov to be eighth to take reverse grid pole as Armstrong moved up to ninth and Daruvala getting the final point in 10th ahead of MP Motorsport’s Nobuharu Matsushita and a recovering Ilott, who had damage to pit the second time.

Pole-sitter Trient’s Lirim Zendeli did well to hold onto the F3 lead in feature race at Mugello from HWA Racelab’s Jake Hughes and Prema’s Frederik Vesti but Prema’s Logan Sargeant made the move to take fourth from ART’s Theo Pourchaire.

It wasn’t for long, though, as Pourchaire fought back and retook fourth with HWA Racelab’s Enzo Fittipaldi looking for an opportunity as well. In all this, Hughes started to pile on the pressure on Zendeli, with the two going wheel-to-wheel multiple times.

The Turn 1 curve was the place chosen by most to make the move as Hughes got the lead on his second try after slight contact. But Zendeli wasn’t holding back as he retook the position. The two continued to squabble as Vesti joined the fray.

Despite resistance from Zendeli for laps, Hughes eventually got the better of him with him losing out to a faster Vesti as well, as the Prema drive quickly got onto the tail of the Brit. The duo continued on to fight back and forth until the final lap.

Vesti initially got the lead but Hughes retook it, only to lose it again on the final lap with the Dane securing his third F3 victory as the Brit had to settle for second. Behind, Pourchaire brought himself into the title fight with a third-place finish.

Zendeli had to settle for fourth as Fittipaldi passed Sargeant to secure his best-ever finish of fifth as Sargeant was sixth from ART’s Aleksandr Smolyar with Trident’s David Beckmann in seventh from Sebastian Fernandez and Hitech GP’s Liam Lawson.

The Kiwi has reverse grid pole but he is out of the F3 title contention along with Beckmann and Vesti. It will be an uphill battle for Prema’s Oscar Piastri after only finishing 11th with the Australian leading but tied on 160 points with Sargeant as Pourchaire is third with 151.