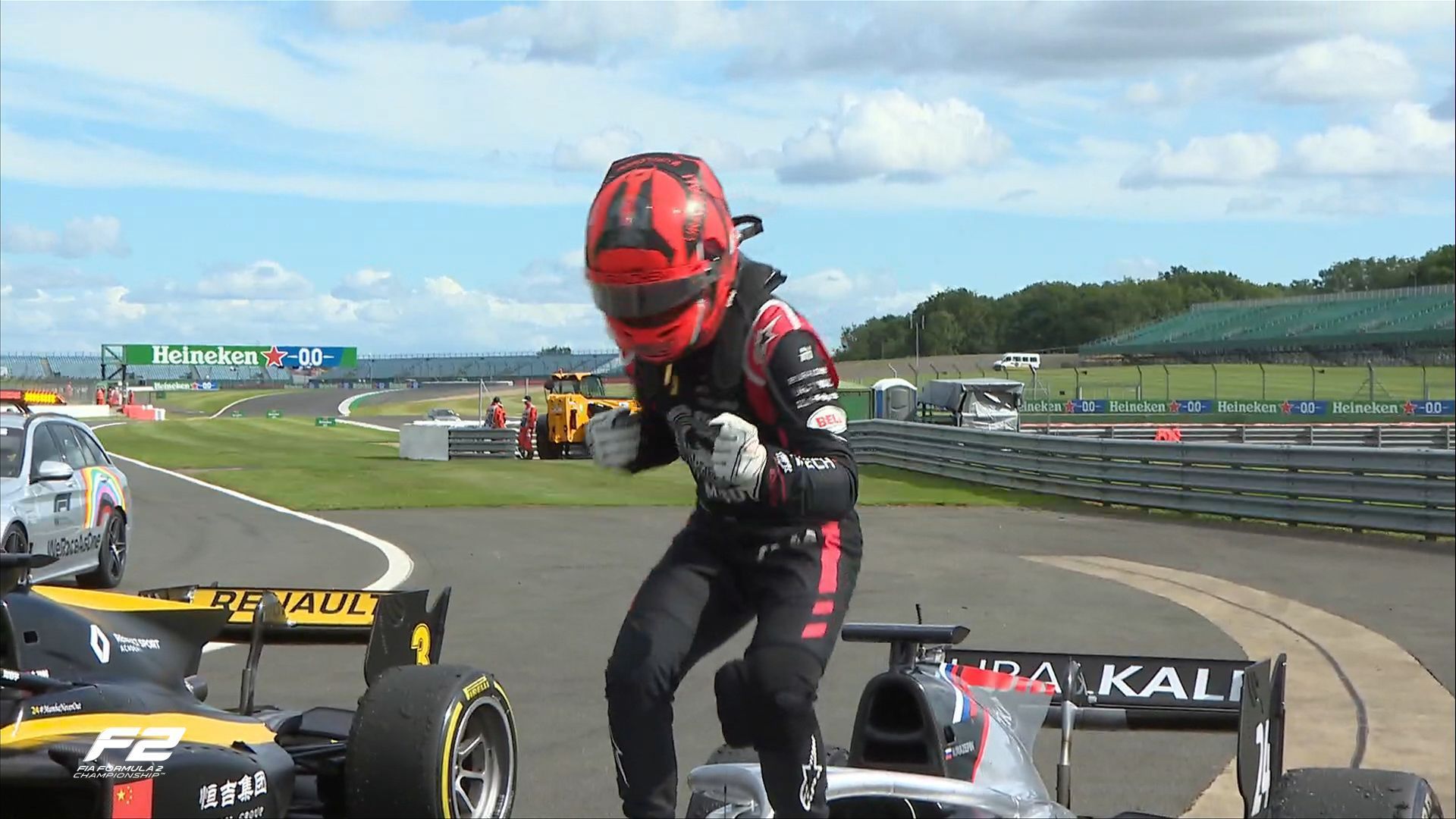 Already it was bad for UNI-Virtuosi Racing’s Callum Ilott as he stalled ahead of the formation lap in feature F2 race at Silverstone and was forced to start from the pitlane. It didn’t work for pole-sitter MP Motorsport’s Felipe Drugovich too.

As things settled down, Mazepin made his move stick on Schumacher around the outside to lead the F2 race as points leader Prema’s Robert Shwartzman was up to 13th and Ilott was 14th from the pitlane in the early stages of the race.

While some drivers started to pit which included leaders Mazepin and Schumacher, it was Zhou in a charge as he passed both Tsunoda and Aitken to be fifth on the hard tyres. Being on the alternate strategy, he was second behind Drgovich then.

The hard tyre runners had a clean time at the front without their stops but it was hard work for the second set of drivers who had to stop. While Mazepin checked out, Schumacher lost a place to Lundgaard while behind yet-to-stop HWA Racelab’s Giuliano Alesi.

The Frenchman also troubled Daruvala, who lost a place to Tsunoda with Ilott menacing behind as well. The late stop worked for Zhou, though, as he looked super fast and was already up to third from eighth, where he had come out.

Teammate Ilott was up to fifth as well as the likes of Drugovich and Ticktum started to claw back in the race at the lower half of the Top 10. At the front, Mazepin checked out the Zhour threat to win the feature F2 race at Silverstone.

Zhou passed Lundgaard to be second as the Danish driver lost to Tsunoda with few corners to go and get on the podium. Ilott came through from pitlane to fifth as Deletraz was sixth with Drugovich seventh as Ticktum in eighth secured the reverse-grid pole.

Schumacher hung on to ninth in the end as Daruvala couldn’t get him but the Indian lost 10th to end up 12th with no tyre left, as Matsushita came through to take the final point and Charouz’s Pedro Piquet ending up 11th.

Pole-sitter Prema’s Logan Sargeant got off the line well in feature F3 race at Silverstone but Hitech GP’s Liam Lawson had a better one as he took the lead at Stowe as Prema’s Oscar Piastri fended off Frederik Vesti after Hitech GP’s Max Fewtrell’s off moment.

Fewtrell dropped in the mid-pack from fourth as Virtual Safety Car was deployed for Jenzer’s Matteo Nannini. At the same time, Hitech GP’s Dennis Hauger was handed a five-second penalty for causing a collision when he clipped Campos’ Sophia Floersch.

Later in the race, HWA Racelab’s Enzo Fittipaldi was also handed a five-second penalty for causing a collision. At the frotn, meanwhile, Lawson led the way but Piastri cleared Sargeant for second as Vesti came under pressure from HWA Racelab’s Jake Hughes.

As Lawson and Piastri got into a fight for the lead, a safety car was deployed when MP Motorsport’s Bent Viscaal had a collision with HWA Racelab’s Jack Doohan as Carlin’s Ben Barnicoat was also involved. The re-start, though, worked well but not for all.

It wasn’t long that the two Trident drivers Lirim Zendelli and Oli Caldwell where fighting wheel-to-wheel when the latter had his rear-right clipped by Fewtrell which punctured his tyre and spun him around as Charouz’s Lukas Dunner crashed into him.

It was a heavy damage with the Trident car destroyed as the race ended under safety car with Lawson winning his second F3 race from Piastri and Sargeant in the Top 3. Behind, Hughes passed Vesti to take fourth as Campos’ Alexander Peroni ended up sixth.