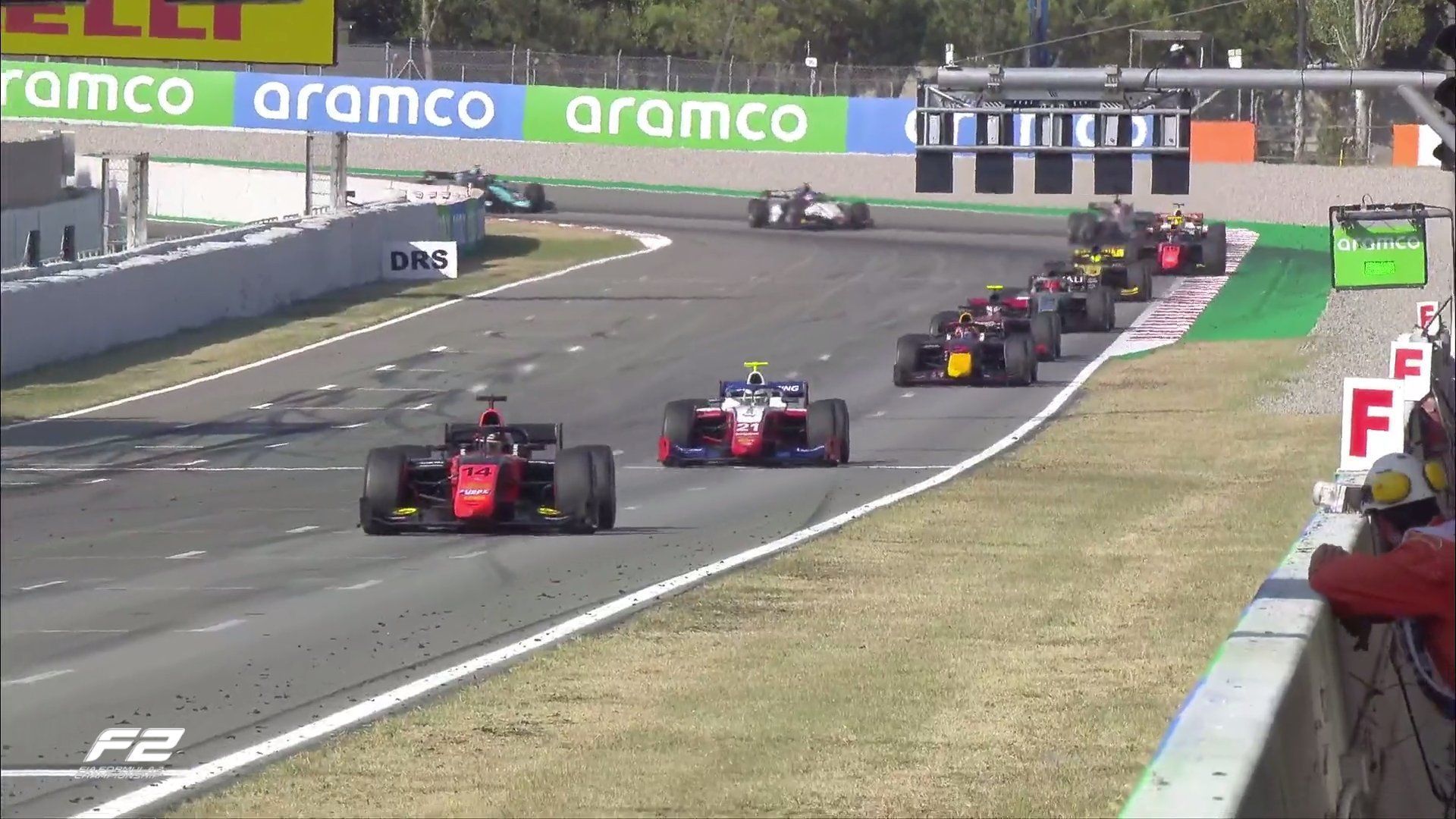 It was a quick safety car to start the feature F2 race at Circuit de Catalunya-Barcelona as Prema’s Robert Shwartzman took the lead from pole-sitter UNI-Virtuosi Racing’s Callum Ilott as fast-starter Prema’s Mick Schumacher was upto to third.

The safety car was for ART Grand Prix’s Marcus Armstrong, who spun on his own onto the gravel. Meanwhile, behind the Top 3, UNI-Virtuosi Racing’s Guanyu Zhou was fourth from MP Motorsport’s Felipe Drugovich and Campos Racing’s Jack Aitken.

Carlin’s Yuki Tsunoda slotted in seventh from DAMS’ Daniel Ticktum as a wide moment from Hitech GP’s Nikita Mazepin did not hurt him a lot in ninth, with Charouz’s Pedro Piquet gaining the most to be 10th at the end of the first lap.

The fight for sixth was on between Aitken and Tsunoda as the Japanese managed to take the place with both then pitting a lap later. At the front as well, Ilott came back on Shwartzman to take the lead of the feature F2 race with the Russian then pitting.

With Ilott also pitting, Schumacher had the lead on the alternate strategy with Drugovich and Mazepin in the Top 3, who had cleared Ticktum. HWA Racelab’s Artem Markelov was fifth from MP Motorsport’s Nobuharu Matsushita on the hard compound.

HWA Racelab’s Giuliano Alesi slotted in seventh from ART’s Christian Lundgaard and Trident’s Marino Sato in the Top 9 on a different strategy as Ilott in 10th had track position over Shwartzman after the two had their stops done.

As Schumacher led the way to create enough gap to supposed net F2 race leader Ilott, the German’s slight off-track moment lost his momentum as he started to struggle with tyres with Mazepin and Ticktum starting to catch him as well.

As the race progressed, the tyre struggle became similar up and down the grid, whether on soft-hard combination or the hard-soft strategy and Schumacher was called in very early to change onto the soft as he dropped to 13th in the order.

Ilott was back in the F2 lead with a late-stopper Drugovich making the moves after he passed Shwartzman for fourth behind Mazepin and Matsushita. A safety car for a stalled Alesi changed the whole game with a mix of strategies on display.

Replays showed DAMS’ Sean Gelael tagging the back of Alesi while in the fight with Carlin’s Jehan Daruvala and ART’s Christian Lundgaard. A second stop for most had Tsunoda in the lead from Ilott and Matsushita in the Top 3 – the latter on the alternate strategy.

Similarly, Mazepin was fourth with Shwartzman in fifth, Aitken sixth, Schumacher seventh, Zhou eighth, Drugovich ninth and Daruvala 10th – where the Campos and Carlin racer did not stop the second time, where many behind did so.

The re-start worked well for Tsunoda as he just hung on to the lead from Ilott, Matushita and Mazepin as they chased the Japanese racer. F2 points leader tried desperately but couple of moments allowed the senior Japanese racer to get past in second.

As the DRS was enabled, Matsushita got the lead from Tsunoda, who dropped behind Shwartzman after the Russian got upto speed soon. The Carlin racer was third with Ilott in fourth from Mazepin, who was put under investigation by the stewards.

Zhou made his way to sixth after a slow stop with Drugovich seventh, Schumacher eighth, Hitech GP’s Luca Ghiotto ninth and Piquet 10th when a third safety car was deployed for a crash for Trident’s Roy Nissany after his tangle with Campos’ Guilherme Samaia.

The re-start worked well for Matsushita as he held on to win the crazy feature F2 race after starting from 18th with Shwartzman in second from Mazepin, but the Russian was handed a penalty which dropped him to 13th, allowing Zhou to the final place on the podium.

After all the dramas, Lundgaard almost had a point in 11th with Markelov 12th ahead of the two penalty-handed drivers Mazepin and Piquet. Trident’s Marino Sato finished 15th from Samaia and Daruvala as Aitken and Gelael stopped on the final lap but were classified.

It was straight-forward feature F3 race at Circuit de Catalunya-Barcelona but it had its moments with two safety car periods for MP Motorsport’s Bent Viscaal and Prema’s Frederick Vesti which allowed some movements in the grid.

Pole-sitter Prema’s Logan Sargeant was the one to lose a place in that as HWA Racelab’s Jake Hughes made the move on the second re-start and take the lead while the American had to fend off from F3 title contender Hitech GP’s Liam Lawson.

Carlin’s Clement Novalak was in the mix in the fight for fourth as Trident’s David Beckmann and Prema’s Oscar Piastri were on his tail. The Australian got ahead after the first re-start but the second re-start caught him out as lost two places in that.

It was Hughes to take his first win of the 2020 F3 season as Sargeant fended off Lawson for second with Novalak taking fourth from Beckmann and Piastri. ART’s Theo Pourchaire was seventh as Campos’ Alex Peroni held off MP Motorsport’s Richard Verschoor and Jenzer’s Matteo Nannini for eighth – the Italian taking reverse F3 grid pole.

UPDATE: The FIA and F2 has updated on an incident involving Gelael, who had to extracted from the car and airlifted to Hospital General De Granollers as a precautionary check. The statement doesn’t state the reason as the Indonesian was shown to be stopped on the track when the race got over but there was no movement in the cockpit. There is a possibility of a clash with Aitken as he retired on the final lap as well but no confirmation.

The statement stated: “The FIA advises that an incident occurred during the final lap of the FIA Formula 2 Feature Race today, in Barcelona, involving Sean Gelael. The DAMS driver was immediately attended to by emergency and medical crews. He was extricated by the attending medical crew and has been transferred by ambulance to Hospital General De Granollers for precautionary checks.”