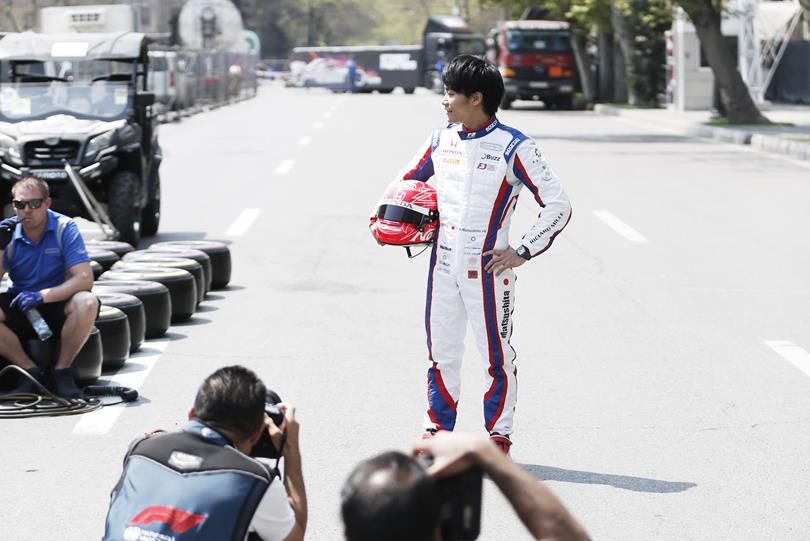 After the dramas during the FP1 session of F1 Azerbaijan GP, the qualifying for F2 at Baku Street Circuit started after a 30 minutes delay as the organisers sorted the drain cover which loosened and hit the Williams car of George Russell.

It wasn’t straightforward start to the F2 qualifying as Prema’s Sean Gelael’s car came to a halt due to an apparent engine issue with the session being red flagged. There were dramas still as when the marshals started to push Gelael’s car, it started in itself.

The two marshals pushing the car fell down as Gelael moved away into the pits. The stewards though put him under investigation. At the half-way mark, it was UNI-Virtuosi Racing’s Luca Ghiotto with provisional pole.

The Italian was then beaten by Carlin’s Nobuharu Matsushita but ART Grand Prix’s Nyck de Vries took it away from him with a 1m54.999s. It looked a pole for the Dutchman but the Japanese fought back with a 1m54.555s to eventually take pole for Baku’s feature race.

De Vries had to settle for second with Ghiotto (1m55.037s) in third alongside DAMS’ Sergio Sette Camara (1m55.677s). In a much better show, MP Motorsport’s Jordan King sprung in a surprise fifth with Prema’s Mick Schumacher (1m55.797s) slotting in sixth.

Just missing in the top half was Ferrari junior and Sauber Junior Team by Charouz’s Callum Ilott in 11th as he led a train of F1-affiliated drivers with Carlin’s Louis Deletraz in 12th from UNI-Virtuosi Racing’s Guanyu Zhou and Trident’s Giuliano Alesi.

Meanwhile, MP Motorsport’s Mahaveer Raghunathan qualified 19th but the Indian has double penalty – one from Bahrain and the other of a pitlane start for Baku after he missed the weighbridge at the end of the practice session.

UPDATE: The stewards has decided to allow Prema’s Gelael to start the feature race on Saturday from the back, even though he was found in serious breach as he re-started the car at a time when marshals were pushing it to safety.

The note from F2 states that the Indonesian was actually barred from running in qualifying after the incident as he eventually did not set a time. The statement adds that Gelael has been officially disqualified from the results as well.