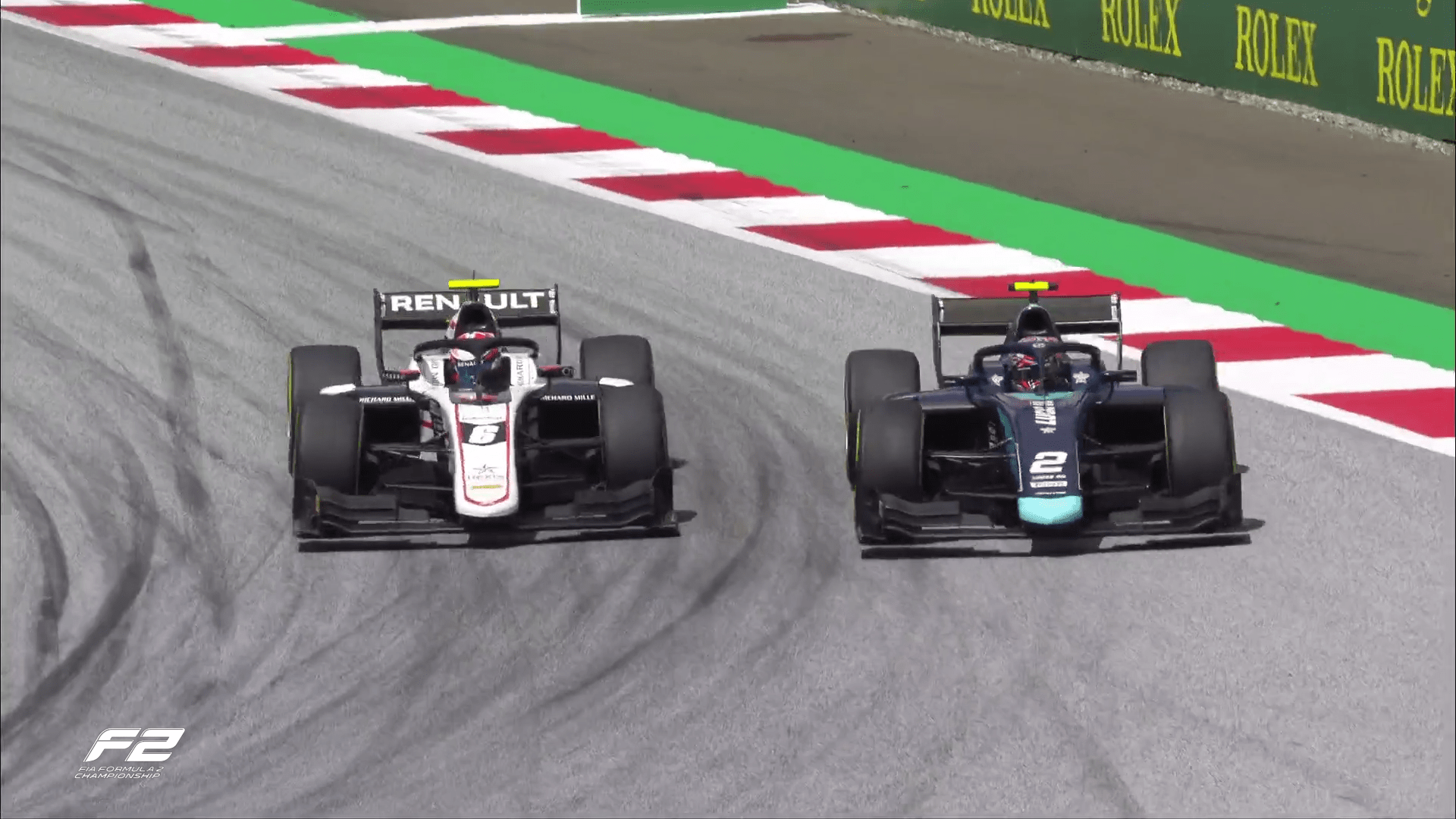 The sprint F2 race at Red Bull Ring took under dry conditions as reverse-grid pole-sitter DAMS’ Daniel Ticktum got away nicely to lead from ART pair of Christian Lungaard and Marcus Armstrong with Prema’s Mick Schumacher in fourth.

His teammate and feature F2 race winner Robert Shwartzman spun on his own at Turn 1 while fighting Carlin’s Yuki Tsunoda to retire as the VSC was deployed. The re-start saw Ticktum lose the lead to Lundgaard after a late move from the Dane at Turn 3.

Armstrong got behind Ticktum too as Schumacher was a bit further away ahead of the UNI-Virtuosi Racing pair of Guanyu Zhou and Callum Ilott. The fight for seventh was on with Tsunoda leading four cars including teammate Jehan Daruvala in 11th.

His run ended in a retirement as Tsunoda complained about something broken in his car. It helped Campos Racing’s Jack Aitken to move to seventh after passing DAMS’ Sean Gelael. Further up, it was disaster for Schumacher, who was forced to retire.

His fire extinguisher blew inside the car which was game over for him as Zhou and Ilott were promoted to fourth and fifth, whereas Hitech GP’s Nikita Mazepin was up to eighth. It was steady at the front though despite inroads from Ticktum.

Lundgaard eventually eased in to win the sprint F2 race at Red Bull Ring with Armstrong rounding out the podium despite late charge from Zhou and Ilott, who were fourth and fifth with Aitken sixth, Gelael seventh and Mazepin eighth in the points.

Daruvala missed out in points to be ninth with Hitech GP’s Luca Ghiotto in 12th in close quarters with MP Motorsport’s Nobuharu Matsushita and Charouz Racing System’s Louis Deletraz, who is under investigation for an incident with Trident’s Roy Nissany.

After the rain trouble on Saturday, the F3 drivers were greeted by a fine weather on Sunday for the sprint race as reverse-grid pole-sitter HWA Racelab’s Jake Hughes was pounced by front-row starter ART’s Theo Pourchaire at the start.

The fight didn’t end there as Hitech GP’s Liam Lawson got in to the mix too as they went three-wide where Hughes emerged as the leader with the Kiwi second and Pourchaire third. Prema’s Logan Sargeant slotted in fourth from Trident’s David Beckmann.

The race was neutralised on Lap 11 to recover Campos’ Sophia Floersch car after she was struck by ART’s Alexander Smolyar, with her race ending straightaway. On the same lap, the German’s teammates Alex Peroni and Alessio Deledda had off moments.

The safety car worked for Lawson as on re-start he took the F3 lead from Hughes as Verschoor got the better of Caldwell for sixth. But it was only start of the drama as the two front-runners continued their fight with the Brit getting back in lead.

The safety car was called back after a brief VSC when Hughes collided with Lawson in the fight for the lead with both retiring. It helped Pourchaire into lead with Sargeant and Beckmann in the Top 3, who led a big train behind.

The race did not re-start helping Pourchaire to secure his first F3 victory at Red Bull Racing as Sargeant was second and Beckmann third from Verschoor, Piastri, Caldwell, Fewtrell, Vesti, ART’s Sebastian Fernandez and Trident’s Lirim Zendelli in the Top 10.

Here’s how the feature F2 and F3 race panned out