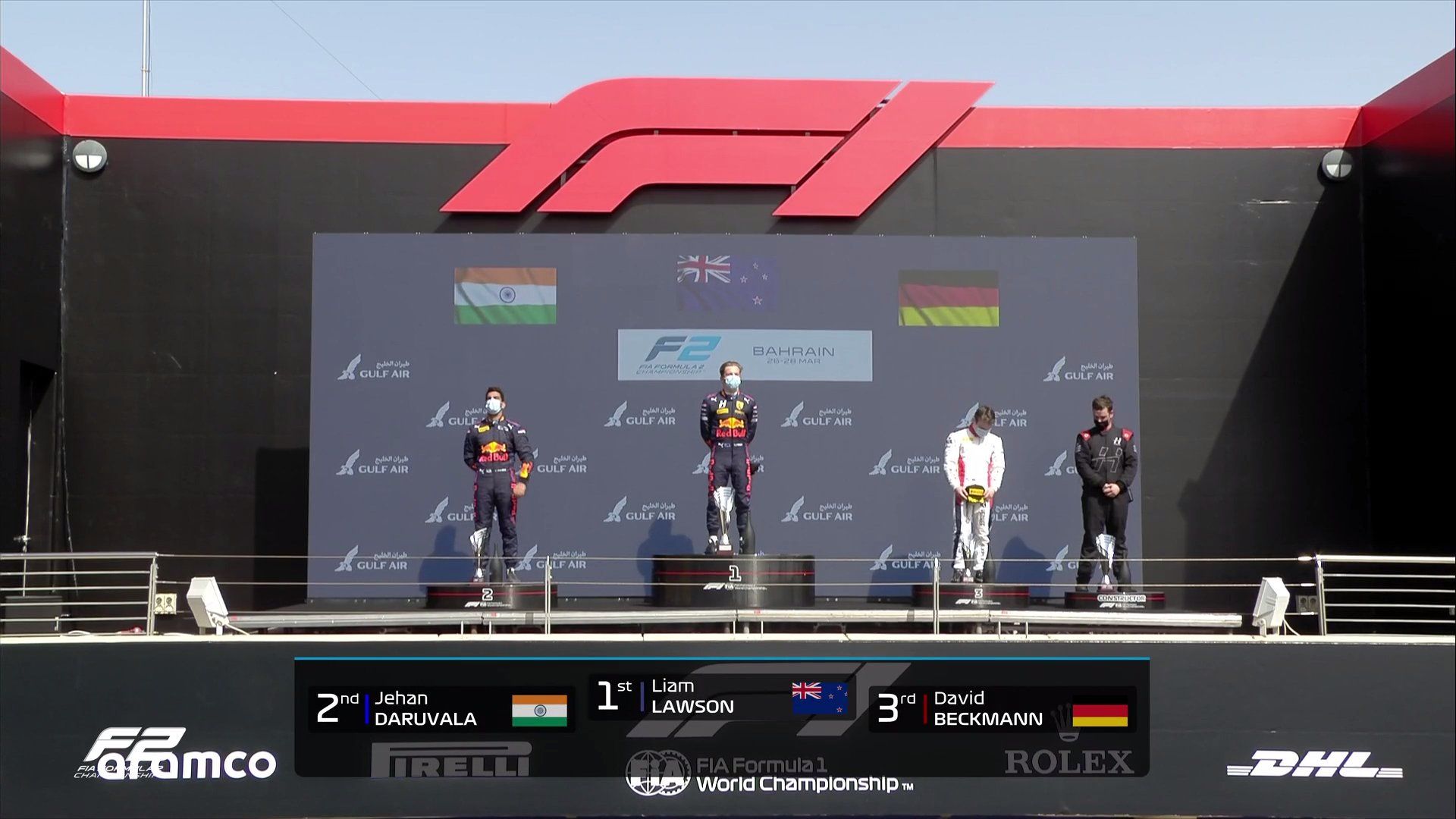 Liam Lawson and Oscar Piastri led the way on Day 1 of Bahrain F2 weekend with wins in Race 1 and Race 2 – making it two rookie winners.

It was a massive start from Hitech GP’s Liam Lawson in Sprint Race 1 in Bahrain as he took the lead from third on the grid, leaving ART’s Theo Pourchaire and Charouz’s David Beckmann, where the former managed to retake the place despite losing it.

Carlin’s Jehan Daruvala moved up to fourth as Prema’s Robert Shwartzman made a storming start from 11th to fifth, which included a fight against teammate Oscar Piastri. MP Motorsport’s Richard Verschoor was seventh from qualifying’s Top 3.

When he was pulling off, Campos’ Ralph Boschung got unsighted and clipped his rear, which resulted in his retirement too. Just before the VSC, Ticktum had a moment in Turn 1 when he spun Verschoor around, for which he was handed a five-second penalty.

There was also a penalty for Charouz’s Guilherme Samaia for VSC infringement. It was Lawson leading still from Pourchaire and Beckmann, but Daruvala started to punch in with his tyre advantage, while keeping off Shwartzman at the same time.

Beckmann started to struggle and had a off too, as he eventually lost third to Daruvala, after the Indian made a move around the outside in Turn 4. As he set out for Pourchaire, the Sauber junior stopped on track with a mechanical issue for him too.

It was another VSC as the re-start had Lawson being caught up by Daruvala. Behind, Beckmann managed to float in third, as Shwartzman fended off Piastri, with Lundgaard and Ticktum chasing the 2020 F3 winner and a F2 rookie.

At the front, Lawson just managed to hang on from Daruvala to register his first win in F2 as a rookie, as the duo were over 10s ahead of third-placed Beckmann, who scored his first podium. He eventually managed to keep off the fighting Prema duo.

Shwartzman fended off Piastri’s pressure to keep fourth, as Lundgaard ended up sixth from Zhou and Ticktum. The British racer was seventh on the road but a 5s penalty dropped him to eighth, as MP Motorsport’s Lirim Zendeli and DAMS’ Juri Vips rounded the Top 10.

It was Samaia in 10th but he dropped to 12th after a 5s penalty, which helped Vips to take Race 2 pole. The Estonian made up 12 places from 22nd and fended off both Trident’s Bent Viscaal and DAMS’ Roy Nissany in the process. He was also a black and white flag.

UPDATE: Post-race, it was found that Viscaal overtook Vips under yellow flag, which resulted in a 5s penalty to the Dutchman. He dropped to 13th, promoting Samaia and Nissany to 11th and 12th, respectively.

The second F2 race under floodlights had an interesting start, where Vips led the way from Zendeli and Zhou, as Ticktum saw his run end in the first corner itself. It was a repeat incident of the first race, where the Brit collided with Verschoor and this time he was in the receiving end.

He turned right when Shwartzman clipped his rear, sending both into a spin and into retirement. It helped Lundgaard to move up to fourth with Piastri fifth from Lawson, Drugovich, Beckmann, Viscaal and Petecof in the Top 10.

The safety car neutralised the race as re-start saw Vips continue to lead but Zhou moving up to second from Zendeli. Another gainer was Lawson along with Drugovich and Piastri, as Lundgaard dropped to seventh from Viscaal, Petecof and Pourchaire.

The fight for the lead was on straightaway as Vips defended hard from Zhou, but to no avail. The Chinese racer took lead as Zendeli dropped to the mid-pack and eventually suffer a puncture after being hit by Lundgaard, while the two battled for position.

Zendeli suffered a puncture and eventually retired despite pitting for fresh tyres. Lundgaard was handed a 10s time penalty as he ran fifth behind Lawson and Drugovich. Behind him was Piastri, Viscaal, Armstrong, Petecof and Pourchaire in the Top 10.

Things settled down for few laps as Armstrong and Pourchaire were the only ones making up places – the former being the only on to run the soft tyres. Drama then kicked in when Lawson, Drugovich and Lundgaard ran closely in the fight for third.

The trio went wheel-to-wheel, where Lundgaard made the most from around the outside at Turn 4, Drugovich tried to sneak past Lawson on the inside but the two made contact. While the Kiwi stopped on track, the other two managed to continue with safety car in.

This resulted in a spring of pit stops where Zhou stayed out along with Drugovich, Armstrong and Viscaal. In the pit stop itself, Lundgaard served his 10s penalty – which everyone was unaware about, which forced Pourchaire to pit a lap later.

The order behind the safety car had Zhou leading Drugovich, Armstrong, Viscaal, Vips, Boschung, Nissany, Piastri, Lundgaard and Daruvala. It was mayhem on re-start, when the non-stoppers started to drop back, while the lead remained with the Chinese racer.

Vips was back up to challenge him along with Piastri, as Lundgaard made the most of the situation too, bringing Daruvala with him. There was a brief VSC period for Deledda, which slowed things down, but mayhem ensued again with three laps to go.

There was late heartbreak for Vips, who slowed down with a mechanical issue. It brought Piastri and Lundgaard in the fight for the win against Zhou, which went to the wire, as the Australian made the most of the three-way battle to end up on top.

Piastri made it two rookie winners to start the F2 season as Lundgaard fell short ahead of Zhou and Daruvala. Unaware that he served his penalty, the 10s was added to his time, which dropped the Dane to ninth and promoted the Indian to third.

The podium ceremony was held that way but the results changed post-race, where Lundgaard retained second from Zhou, with Daruvala fourth ahead of Verschoor, Pourchaire, Beckmann and Sato in the Top 8 to score points.

The Top 10 was rounded off by Nannini and Armstrong. There was also a 10s penalty to Drugovich which dropped him way down, while Vips had 5s penalty for their clash with Lawson. Post-race, Daruvala was summoned for unsafe release, with the team fined 500 euros.