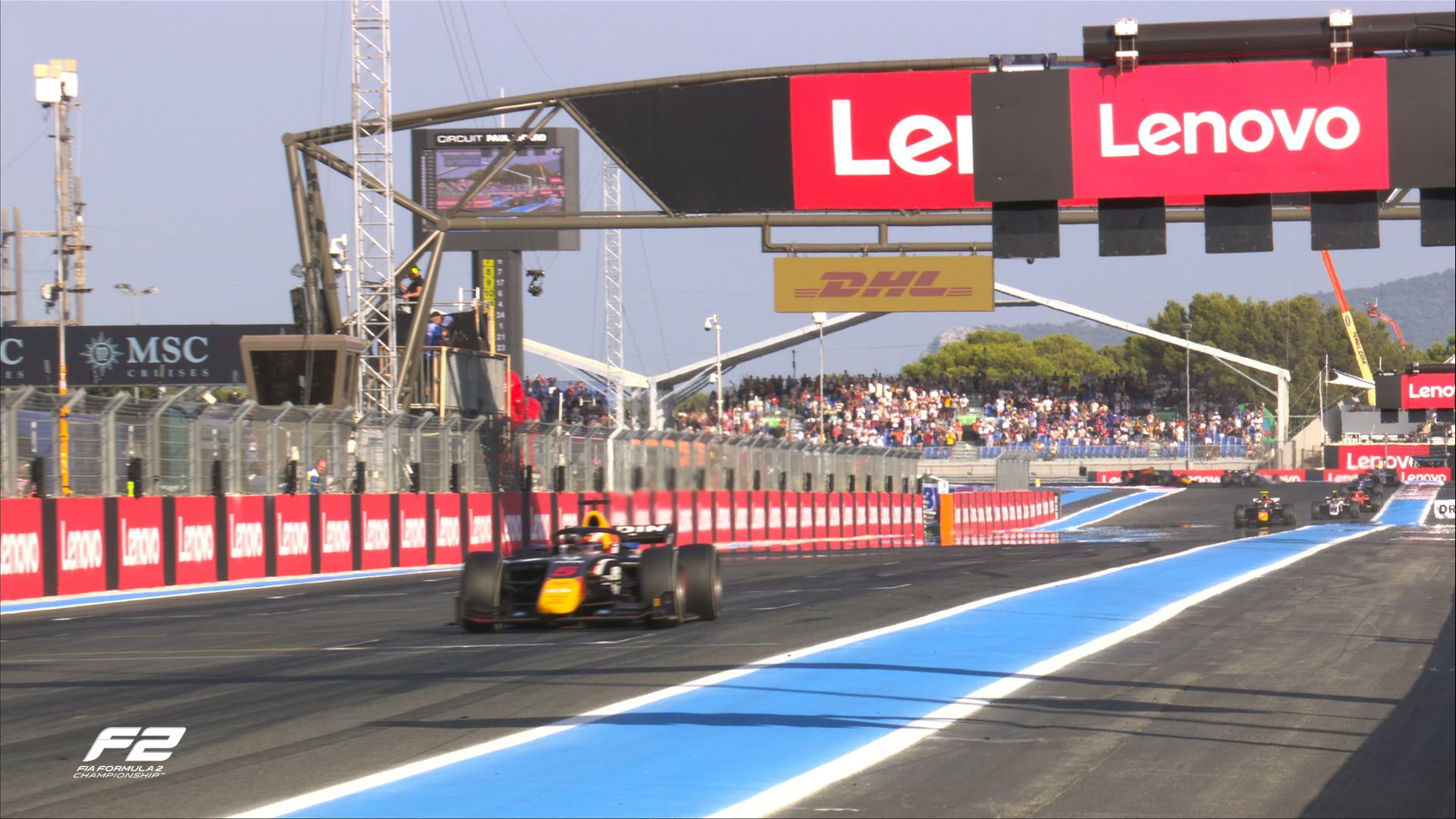 The formation lap in sprint F2 race at Paul Ricard saw three stallers with Trident’s Richard Verschoor, Charouz’s Enzo Fittipaldi and MP Motorsport’s Clement Novalak unable to get going. The Dutchman was forced to retire while the other two joined the fray.

Reverse grid pole-sitter Jehan Daruvala made a good start in his Prema to lead the race from Hitech GP’s Marcus Armstrong, as slow starter Carlin’s Liam Lawson lost a place to third and had to defend hard from MP Motorsport’s Felipe Drugovich.

The Brazilian lost to ART’s Theo Pourchaire in the process to be fifth as Virtuosi’s Jack Doohan, Hitech GP’s Juri Vips and ART’s Frederik Vesti rounded out the Top 8 points positions. While Daruvala stretched away, Armstrong came under fire from Lawson.

The two went wheel-to-wheel even at the corners where Lawson made the most of the DRS zones to make a bold move around the outside to take second. Pourchaire stationed himself in fourth to pounce on any opportunity if the two ahead provided.

Verschoor, meanwhile, rejoined the race but he was four laps down. At the front, Lawson started to reel in Daruvala who was struggling for pace at the front. The Kiwi had Armstrong, Pourchaire, Drugovich and Doohan on his tail.

The race was neutralised soon when Fittipaldi was spun around at the chicane where he took the bollard along with him. He was trying to pass Campos’ Roberto Merhi but ended up retiring with VAR’s Amary Cordeel also retiring as he couldn’t avoid Fittipaldi.

The incident between Fittipaldi and Merhi is to be investigated after the race. The re-start worked well for Daruvala who led Lawson, Armstrong, Pourchaire, Drugovich, Doohan, Vips and Vesti in the Top 8 points position, with Carlin’s Logan Sargeant in ninth.

After multiple laps of pressure, Lawson eventually found a way past Daruvala to lead the sprint F2 race in the middle part of the race where the Indian did not have pace. Armstrong and Pourchaire tried to find a way past too but held on to third and fourth.

Armstrong pushed Daruvala hard at the same chicane as Lawson, but the two touched and went off road. The Indian kept the place but the Kiwi came under pressure from Pourchaire, who eventually got through the Hitech GP driver to take third.

The two went off track while they made the move as Armstrong dropped down the order with Pourchaire coming under pressure from Drugovich. Both the incidents involving Daruvala and Armstrong along with Armstrong and Pourchaire is under investigation.

Amid all this, Lawson took a fine sprint F2 race win from Daruvala, who managed to keep Pourchaire off for second. Drugovich was fourth from Doohan, Vips, Vesti and DAMS’ Ayumu Iawsa in the points position after the Japanese overtook Sargeant early on.

Armstrong had another tangle late in the race to end up ninth from Sargeant in the Top 10. The Kiwi had a third investigation under his name after he had a moment in the final corner against teammate Vips.

UPDATE: There were flurry of penalties post-race for the investigations done. Fittipaldi was handed grid drop of five places for the feature F2 race along with two penalty points. The Brazilian was wholly blamed for the incident in the case.

Likewise, Armstrong was wholly blamed for his attempted pass on Daruvala at the same corner for second place. The Kiwi went off track taking the Indian along with him where the latter did not gain a lasting advantage, as the Hitech GP driver was handed 5s penalty.

He got one point on his superlicense for this incident. In the two subsequent clashes involving Armstrong, his teammate Vips was adjudged guilty for one and Pourchaire for another. Both were blamed for forcing him off track and earned 5s penalty each.

They both had one penalty point on their superlicense too. The penalty to Pourchaire dropped him out of the podium with Drugovich securing more points in third from Doohan, Vesti, Iwasa as Pourchaire was seventh from Sargeant. Vips dropped out of points in 11th, while Armstrong ended up 14th. 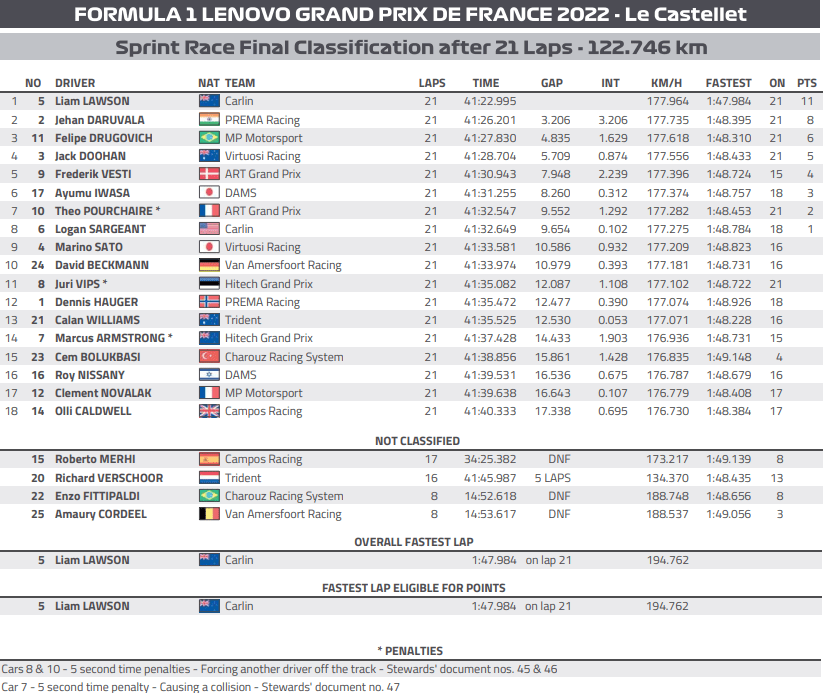