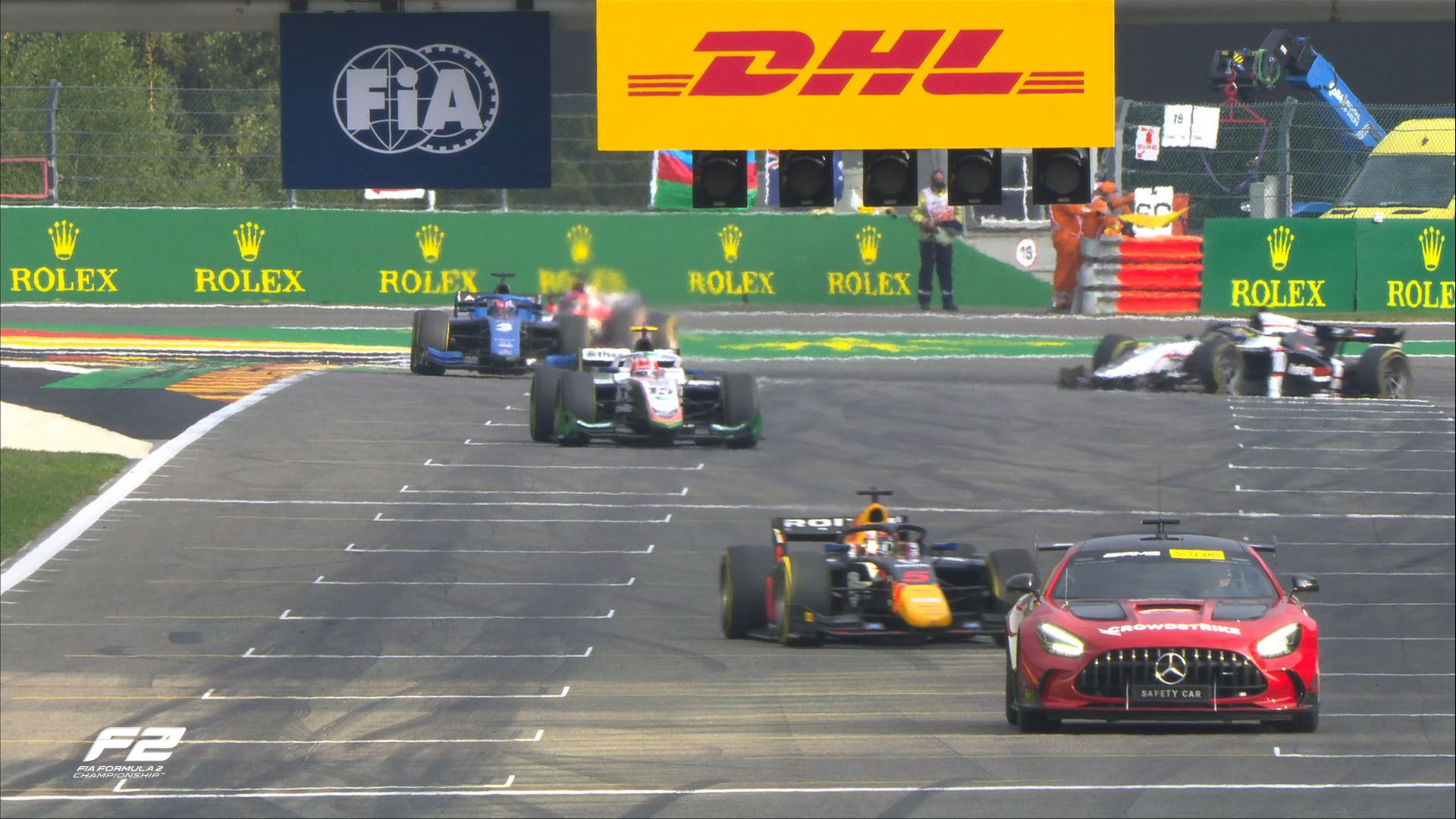 Even before the start of the sprint F2 race at Spa-Francorchamps, front-row starter Jehan Daruvala’s run ended due to a fuel pump failure on the way to the grid in his Prema. Pole-sitter Ralph Boschung then led the way in his Campos Racing car.

He fended off Carlin’s Liam Lawson who had a grass moment but moved up to second from Trident’s Richard Verschoor and Virtuosi Racing’s Jack Doohan, as ART’s Theo Pourchaire dropped to fifth from points leader Felipe Drugovich in his MP Motorsport car.

The points situation saw Hitech GP’s Marcus Armstrong in seventh from VAR’s David Beckmman, as Carlin’s Logan Sargeant and Prema’s Dennis Hauger rounded the Top 10 but the duo were outside the points position.

It got straightened out at the front after Lawson took the F2 lead from Boschung, who held onto second as Doohan cleared Verschoor for third. The Dutchman then held off Pourchaire, Drugovich and Armstrong in a four-way fight for fourth.

The race neutralised after a crash for Sargeant on his own which resulted in a safety car period. While everyone in the points did not pit, only Drugovich did so to drop to 12th in the order, with the idea to overtake and finish on the podium at least.

The re-start worked well for Lawson in the front from Boschung andd Doohan. Behind them, Drugovich had some troubles initially with his moves but stepped on the gas to eventually move up to fifth when starting the final lap.

At the front, Lawson eased in to win the sprint F2 race at Spa-Francorchamps as Doohan passed Boschung to end up second while the Swiss racer held onto the podium on his return, with Drugovich finishing fourth in the end.

But the Brazilian is under investigation for leaving the track and gaining an advantage during his tussle with Vips, when he gave the place back. Verschoor was fifth from Pouchaire, as Armstrong and Beckmann completed the points position.

Zak O’Sullivan retained the lead from pole into La Source with teammate Benavides attempting to wrestle second from Juan Manuel Correa. With the tow on the Kemmel Straight, the ART Grand Prix driver turned defence into attack, taking the lead but only momentarily. Slight contact with O’Sullivan led to a puncture at the exit of Les Combes and Correa tumbled down the order. At the same time, Franco Colapinto was pitched into a spin by Jonny Edgar and the Trident driver picked up a five-second time penalty for the incident.

Through Pouhon, Benavides was able to sweep by his British teammate for first as front wing damage dropped O’Sullivan down the order. Bearman had a great start and was up to second entering Lap 2 with Edgar hot on his heels in third.

The PREMA Racing man turned second into first with a tow down the Kemmel Straight. A Safety Car was deployed later that lap after Charouz Racing System’s Christian Mansell ended up in the barriers at Les Combes. Just before, Isack Hadjar had pulled a brave move on the Briton, going side-by-side with the Charouz through Eau Rouge to take 18th.

Title rival Victor Martins meanwhile had made his way up to 16th by the time the Safety Car was deployed but had jumped the start. He was handed a drive-through penalty as a result. Arthur Leclerc meanwhile kept out of trouble to reach 13th.

Racing resumed entering Lap 5 and Edgar was the man on the move, taking second from Benavides into Les Combes as leader Bearman was able to generate enough of a gap to defend his lead. A wide moment from Oliver Goethe heading into Stavelot left the Campos Racing driver under pressure from the Trident duo of Roman Stanek and Zane Maloney. Stanek was able to clear the Monégasque driver for fifth but contact on the exit of Blanchimont between Goethe and Maloney resulted in a big crash for the pair. Both drivers were thankfully able to walk away from their cars. As barrier repairs were required, a Red Flag was thrown on Lap 8.

Bearman led from Edgar at the restart with Benavides, Smolyar, Stanek, William Alatalo, Reece Ushijima, David Vidales, Caio Collet and Leclerc the top 10. Racing resumed with a rolling start entering Lap 10 and the leader aced his launch while Alatalo ran wide out of La Source, dropping him down to 10th. The Monégasque in the PREMA wasn’t done, and he seized eighth from Collet into the final corner.

Smolyar moved up to third on the road with a tow on Benavides into Les Combes and he set about chasing down Edgar for second. Stanek made a bold move on the American, running over the wet patches of track into Pouhon to relegate the Carlin back another spot.

Ushijima had looked set to take another spot from Benavides, but it was Vidales that capitalised best, forcing the Van Amersfoort Racing driver to cede sixth place into La Source, and the loss of momentum dropped Ushijima down the order to 15th.

Leclerc was able to force Vidales to go defensive entering Lap 13 and tucked into the slipstream of the Campos driver ahead through Eau Rouge. With DRS, the PREMA man breezed by to take sixth position from the Spaniard. Hadjar was another beneficiary of the drama ahead of him and was 10th with three laps to go.

Leclerc’s charge continued at the expense of Benavides. Another DRS pass down the Kemmel Straight moved him up to fifth position and within range of Edgar as a result of the latter’s pending time penalty. Entering the final lap Alatalo made a great late move on Vidales to surprise the Campos man and seize seventh. That soon became sixth with DRS assistance and Hadjar pulled another move into Les Combes, this time at the expense of Collet.

Bearman was untroubled for most of the race and ended up 1.3s clear at the chequered flag to take a crucial victory in the 2022 title race. Stanek kept Trident on the podium with a P2 finish while Smolyar secured third for MP Motorsport. Edgar’s time penalty dropped him down to fourth position. Leclerc’s charge ended up with P5 while Alatalo put in a great drive to take sixth. Vidales, Benavides, Hadjar and Collet rounded out the points-paying positions.