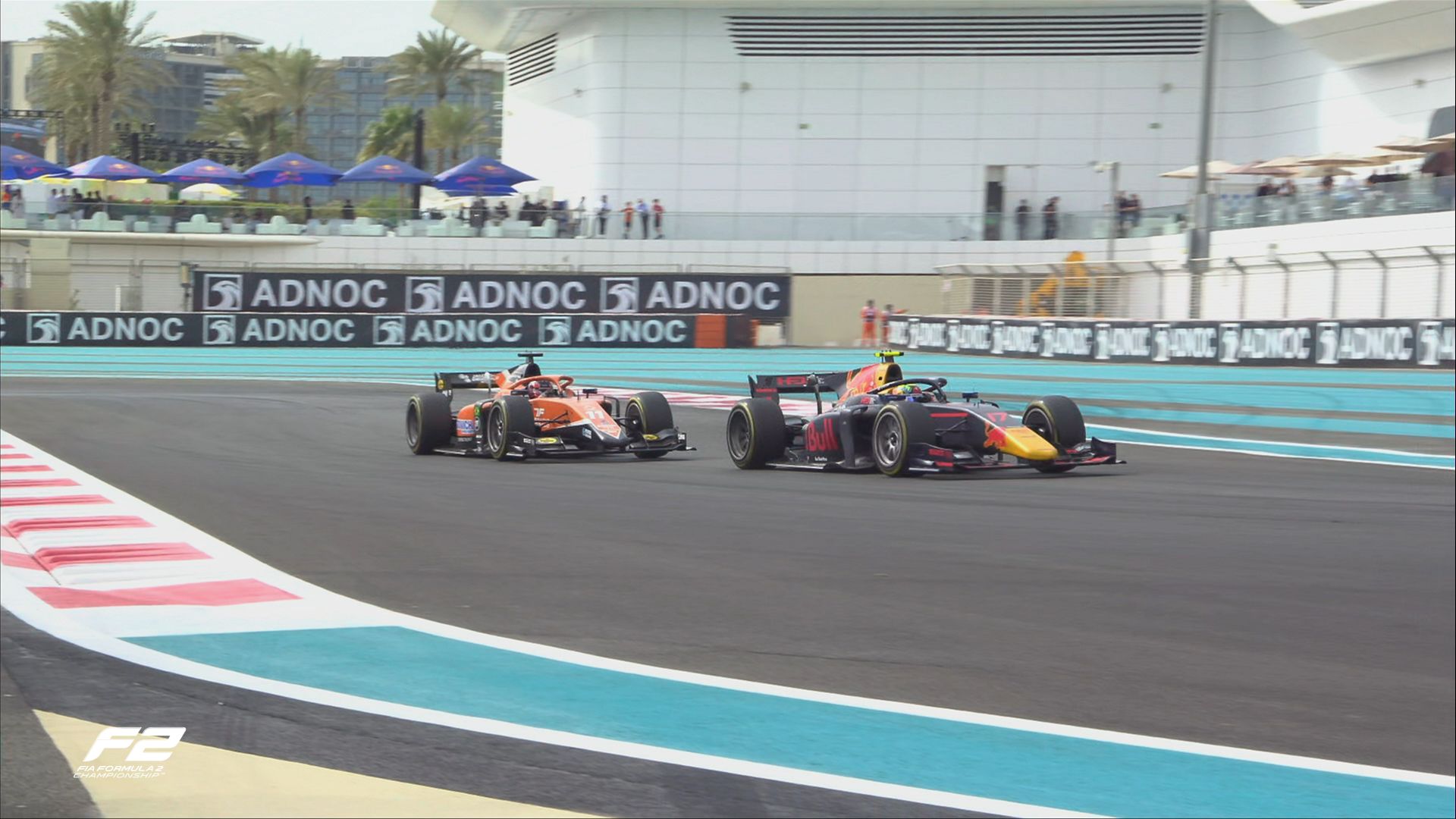 It was a fighting start to feature F2 race at Yas Marina circuit between the two DAMS drivers but pole-sitter Ayumu Iwasa kept the lead from Roy Nissany. MP Motorsport’s Felipe Drugovich was up to third after ART’s Theo Pourchaire dropped to fifth.

Outside the Top 10, MP Motorsport’s Clement Novalak had a wide moment, while a tag from Van Amersfoort’s Juan Manuel Correa saw Campos’ Ralph Boschung have a spin and stop on track. The Virtual Safety Car was deployed amid track battles.

As Iwasa led the way, Pourchaire pounced on Hauger on re-start to take back fourth, while Doohan was up to eighth from Cordeel and Amrstrong. The pit stop party started with Iwasa still maintaining the net F2 lead from Druogvich who cleared Nissany.

Lawson was the biggest gainer of all to be net third after clearing Hauger, Pourchaire and Nissany in the pit stop. The Norwegian was behind him after fending off the Frenchman with the Israeli behind them from Sargeant and Cordeel.

At the front, Doohan led the way in the alternate strategy as he headed Armstrong, Trident’s Richard Verschoor, Prema’s Jehan Daruvala and Charouz’s Enzo Fittipaldi in the Top 5. Behind them, the fight for track position continued on.

Drugovich almost clouted the back of Iwasa but just moved out as Lawson pushed on. Pourchaire, meanwhile, piled on the pressure on Hauger. The two exchanged places but the Norwegian kept the track position still until a mistake from him.

Pourchaire eventually passed him as Nissany held off Sargeant, Cordeel, Hitech GP’s Juri Vips and ART’s Frederik Vesti in their fight. Doohan went deep but it didn’t work for the Australian after a front-left came loose as he came out of the pits.

He came out ahead of Hauger for a charge through but it wasn’t to be. Iwasa took the lead from Drugovich, Lawson, Pourchaire, Hauger, Nissany, Sargeant, Cordeel, Vips and Vesti in the Top 10, with Verschoor just outside looking for points.

The brief VSC period brought Drugovich close to Iwasa as problems for Pourchaire forced him to retire with Hauger taking fourth. Sargeant was fifth after clearing Nissany who lost to Cordeel too. Vips was eighth from Verschoor who cleared Vesti for ninth.

The fight for lead was on between Iwasa and Drugovich as the Brazilian pressured the Japanese driver but he held on to win the feature F2 race. A second place allowed MP Motorsport to win the teams’ championship after taking the drivers’.

Lawson was third and with Sargeant in fifth, Carlin ended up second from ART. The American also secured his F1 drive with Williams for 2023 after gaining enough superlicense points. Hauger was fourth, with Cordeel in sixth.

Verschoor was seventh from Vips, Armstrong and Nissany in the Top 10, with Vesti just missing out.

#F2 #AbuDhabiGP #FINAL Results of the final Feature Race of the 2022 season. @LoganSargeant finishes P5 and has enough points gathered to get his superlicence and he will take the 2023 @WilliamsRacing F1 seat. #MsportXtra @F2Inside @ymcofficial pic.twitter.com/J09iV2LqUN