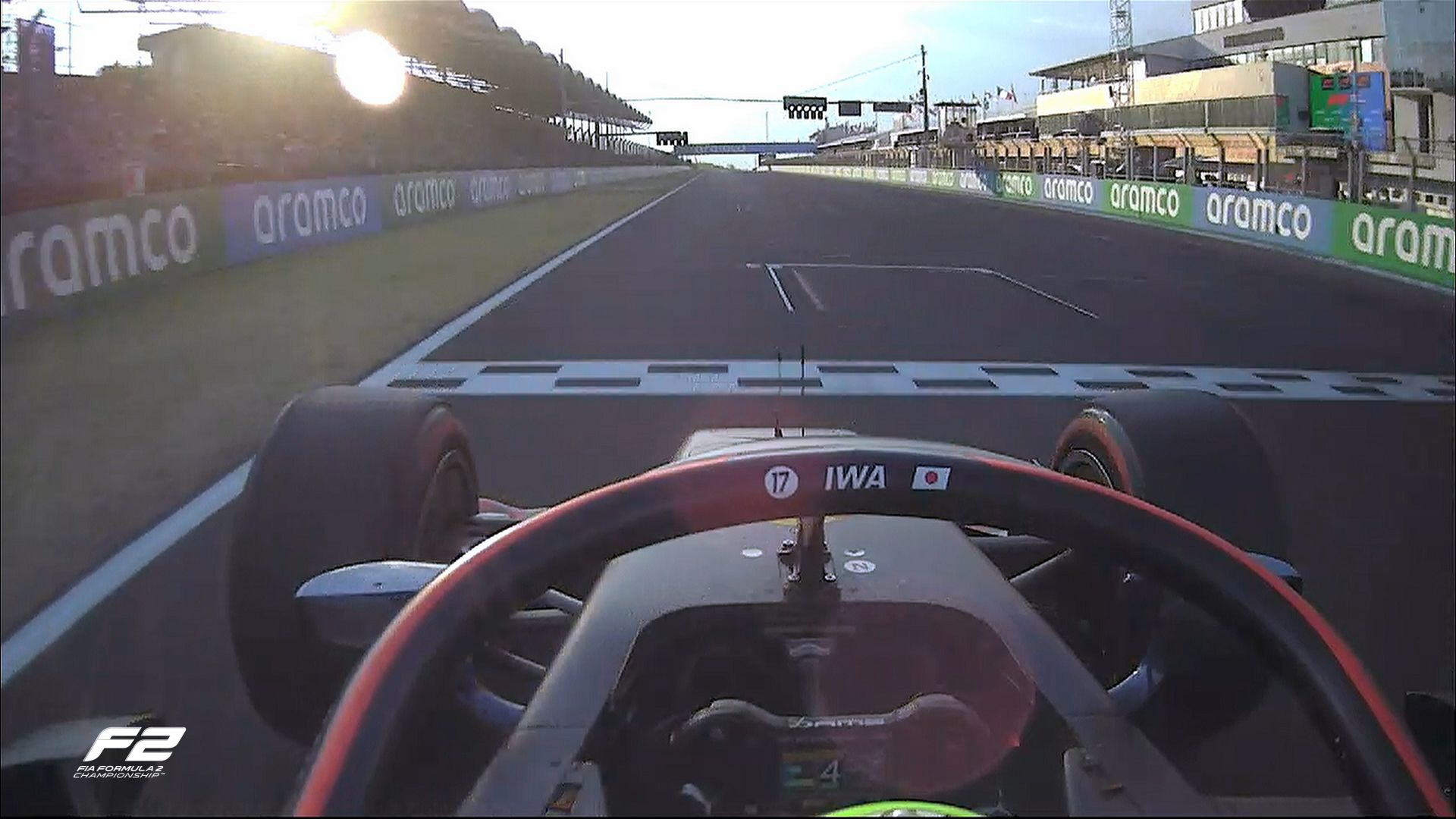 DAMS’ Ayumu Iwasa kept it late to take feature F2 race at Hungaroring from Marcus Armstrong, as Alexander Smolyar did it in F3.

The track limits got several laps deleted in the early part of F2 qualifying at Hungaroring, as ART’s Frederik Vesti led the way provisionally with a 1m28.850s lap which was 0.021s quicker than MP Motorsport’s Felipe Drugovich and 0.033s from Theo Pourchaire.

The Hitech GP pair of Juri Vips and Marcus Armstrong slotted in fourth and fifth, with Carlin pair of Liam Lawson and Logan Sargeant following them. There were minor offs for Virtuosi’s Marino Sato and Sargeant in the first part of the session.

In a different strategy from Campos’ Olli Caldwell, he went quickest provisionally with a 1m28.803s lap when others only started to flock to the track for their second run. Virtuosi’s Jack Doohan and Prema’s Jehan Daruvala ventured out late among all.

The order changed as the laps started to come in and Armstrong looked safe to take pole, but DAMS’ Ayumu Iwasa came out of nowhere to set a 1m27.930s lap to clinch feature F2 race pole with a margin of 0.381s from the Kiwi driver.

F2 points leader Drugovich was third from Pourchaire as Sargeant was fifth from Vesti, whose lap time was deleted due to track limits. Prema’s Dennis Hauger did well in eighth from Charouz’s Enzo Fittipaldi as Doohan was 10th to take sprint F2 race pole.

#F2 #HungarianGP Qualifying results and the grid for the Feature Race on Sunday. The top 10 will be reversed for the Sprint race tomorrow. #MsportXtra pic.twitter.com/iDD1TOGms6

Alexander Smolyar secured pole position around the Hungaroring, avoiding a hectic conclusion to the session following a late red flag stoppage that wouldn’t deny him. Though time remained on the clock following a restart with three minutes to go, Zane Maloney was the closest anyone got to the MP Motorsport driver, ending the session second-fastest 0.126s down. Oliver Bearman was the quickest PREMA Racing driver on the day, securing P3 for the Feature Race.

Trident’s Jonny Edgar posted the first competitive time of the session, though the benchmark tumbled as the initial efforts filtered in. Maloney set a 1:33.748 which was quickly beaten by Caio Collet. The MP driver dipped just under a tenth beneath that with a 1:33.630. The track fell quiet with 10 minutes gone, Collet leading from Isack Hadjar and Victor Martins.

Debutant Oliver Goethe climbed up to P6 on his second flying lap for Campos Racing but lost his time for exceeding track limits at Turn 4, dropping him back down to P10. None of the PREMA drivers had recorded a lap time in the opening half of the session due to deletions because of track limits violations. Purple sectors across the board from Arthur Leclerc put him P1 with a 1:32.912 which teammate Jak Crawford couldn’t quite match. Bearman meanwhile managed to go better than both to secure the PREMA 1-2-3, just 0.040s quicker than the Monégasque.

Smolyar drifted his way through his lap, on the very edge wrestling his car around. At Turn 4 he pushed the absolute limits of the track but managed to somehow keep his MP car within bounds by a sliver of his front left tyre. Those efforts weren’t wasted, and he secured provisional pole with a 1:32.838 with under 12 minutes left on the clock. The drivers filtered out onto the circuit once more with eight and a half minutes remaining.

Just as the first of the final laps were about to be recorded, a red flag was thrown for the stranded Carlin of Zak O’Sullivan. Leclerc was just two corners away from posting a probable provisional pole time while Van Amersfoort Racing’s Reece Ushijima was putting together a monster lap further behind, already a few tenths up through the first sector alone. Three minutes remained of Qualifying, meaning that there would be time for some but not all drivers to get back around in time for another flying lap.

PREMA and VAR opted to hold their drivers while the rest fought for track position ahead on the road, as Championship contenders Hadjar and Martins were the final drivers to leave the pit lane. Crawford emerged from the final corner as the chequered flag flew, leaving his PREMA teammates out of time behind him. Martins and Hadjar also missed the chequered flag but those that went early were finding improvements.

Ushijima leapt up to the front row with a 1:32.803 to go second-fastest but lost his lap due to a track limits violation. Nobody could quite match Smolyar’s improved effort of 1:32.740. Maloney ended up second ahead of Bearman. Leclerc and Saucy earned fourth and fifth while Kush Maini was the next-best MP car in P6 ahead of Crawford, Martins, Collet, Hadjar, Colapinto and Goethe, who will line up on reverse grid pole in his first ever FIA Formula 3 race.