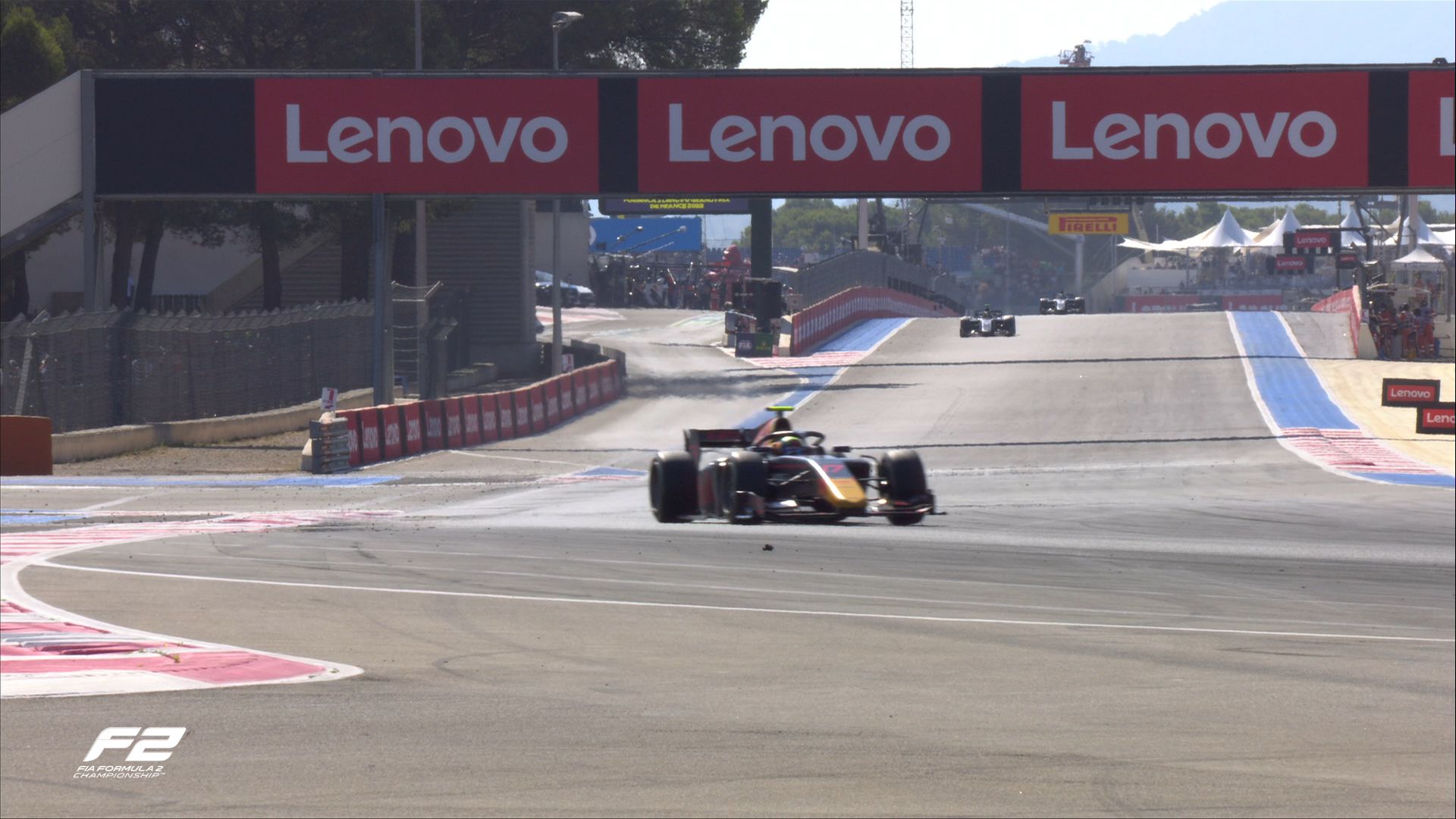 After a slight delay to formation lap start in feature F2 race at Paul Ricard, the race got going where Virtuosi’s Jack Doohan took the lead early on but DAMS’ Ayumu Iwasa passed him later on in the lap to take the lead from the Australian.

Pole-sitter Logan Sargeant dropped to third in his Carlin with ART’s Frederik Vesti behind him – also losing a place. ART’s Theo Pourchaire was fifth from Hitech GP’s Juri Vips with MP Motorsport’s Felipe Drugovich in seventh on the hard tyres.

Carlin’s Liam Lawson moved up to eighth along with Trident’s Richard Verschoor who passed Prema’s Jehan Daruvala after the Indian initially ran ninth. There was a spin for Virtuosi’s Marino Sato at the chicane on his own which ended his race.

There was a collision involving VAR’s David Beckmann, Hitech GP’s Marcus Armstrong and Prema’s Dennis Hauger where the Kiwi was forced to retire while the Norwegian had to pit for a front wing change. The safety car was deployed to clear the Hitech GP car.

The re-start was good for Iwasa who led Doohan, Sargeant, Vesti, Pourchaire and Vips in the Top 6, but Drugovich lost seventh to Lawson with Verschoor and Daruvala in the Top 10. The Indian had to fend off DAMS’ Roy Nissany, whom he did handsomely.

As the race progressed, Pourchaire and Vips were the first to switch to the hard tyres where the Estonian lost out due to a slow stop. Others followed through with Iwasa retaking the net lead. Pourchaire gained on Doohan to take a net second on the road.

A problem in the pit stop for Sargeant ended his race, as Vesti was net fourth and Drugovich in the Top 5. With most of the runners pitting, Iwasa led the way from Pourchaire, who came under pressure from Doohan for second.

The Australian went for the inside move in the chicane but lost control and spun where Pourchaire had to take evasive action. Doohan dropped behind Vesti in fourth, as Drugovich had Lawson on his tail in the fifth for a Top 5 finish.

Nissany made good headway after an early stop to be seventh from Verschoor, with Daruvala in ninth from MP Motorsport’s Clement Novalak in the Top 10. The Indian driver was on the move though as he passed both Nissany and Verschoor to be seventh.

Up ahead, Drugovich decreased four seconds gap to Doohan to catch him and pass him for fourth as Lawson started to catch the Australian too. At the front, Iwasa dominated the proceedings to win the feature F2 race at Paul Ricard from Pourchaire.

Vesti made it two ART cars in the Top 3 and fended off late charge from Drugovich, who took the fastest lap points too. Doohan was fifth from Lawson, with Daruvala in seventh, Novalak eighth, Nissany ninth and Charouz’s Enzo Fittipaldi 10th after late retirement for Verschoor due to suspected fire.