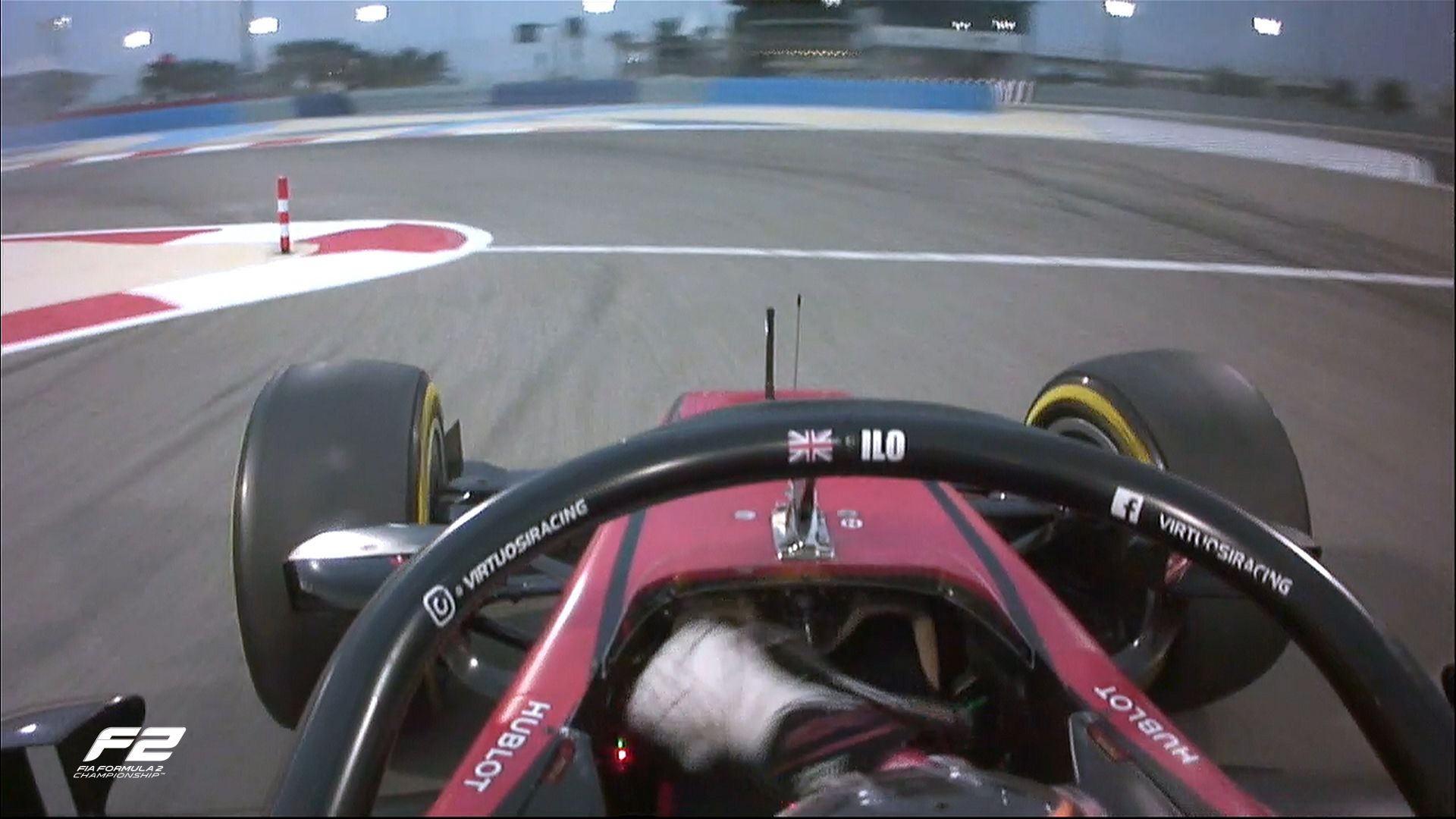 The F2 championship was back underway at the Bahrain International Circuit after two months break as qualifying took place under the flood lights. It was a steady start with UNI-Virtuosi Racing’s Callum Ilott leading with a 1m41.479s at red flag.

Carlin’s Yuki Tsunoda had a moment at Turn 12 where he spun and as he tried to re-join, the car stalled, thereby ending his qualifying already. ART Grand Prix’s Marcus Armstrong was second with UNI-Virtuosi Racing’s Guanyu Zhou third with 20 minutes remaining then.

The re-start saw Ilott still in front with provisional F2 pole but MP Motorsport’s Felipe Drugovich jumped to second with DAMS’ Daniel Ticktum in third, pushing Armstrong and Zhou to fourth and fifth respectively after their first run.

There wasn’t any changes in the Top 6 as the qualifying session ended under the red flag due to a stop for MP Motorsport’s Giuliano Alesi. His teammate nearly had pole but was unable to beat the time of Ilott, set right at the start of the session.

Ilott took a crucial pole then to start the feature F2 race in Bahrain from the front row with Drugovich (1m41.870s) alongside, while Ticktum (1m2.047s) and Armstrong slotted in third and fourth from Zhou and Alesi in the Top 6.

Having had his earlier lap deleted, Hitech GP’s Nikita Mazepin ended up seventh ahead of the lone Carlin car of Jehan Daruvala, with ART’s Christian Lundgaard in ninth from F2 points leader, Mick Schumacher, in his Prema.

With the Valencia pre-season testing to get underway this weekend, three more Formula E outfits revealed their 2020/21 cars with Audi, Jaguar and Venturi, joining Envision Virgin, NIO, DS Techeetah and Mahindra, with their launches in the last few weeks.

On the Audi side – with Lucas di Grassi and Rene Rast driving – the German team revealed its all-new powertrain dubbed as MGU05 for the 2020/21 Formula E season. “That is why we are leaving no stone unturned to reduce the energy loss within the system to an absolute minimum,” said Tristan Summerscale, Audi Formula E Project Leader.

“The extensive work done on in-house test benches was a decisive factor in achieving this objective. In numerous tough testing cycles, the entire powertrain was stressed to its limits in order to raise the entire high-voltage system to a maximum performance level. We have achieved an overall efficiency of more than 95 percent for our powertrain.

“The new MGU inverter unit has an efficiency of even more than 97 percent in all relevant driving conditions. If you compare our MGU with an internal combustion engine delivering a comparable power output of 250 kW, our efficiency is not only twice as high, but our weight of less than 35 kilograms is also much lighter. This clearly shows what an efficient solution an electric powertrain is.”

Up close with the Audi e-tron FE07 and Audi MGU05. High-resolution images are available in the Audi MediaCenter:

While Jaguar kept its colour scheme with a new addition of Sam Bird alongside Mitch Evans, Venturi moved to a white and black combo from the white and red, with the addition of Norman Nato alongside Edoardo Mortara in their respective driver line-ups.

UPDATE: Like Venturi, even Dragon Penske Autosport went for an all-new livery for 2020/21 Formula E season:

DRAGON / PENSKE AUTOSPORT is pleased to reveal our livery and introduce our challenger for the Season 7 @FIAFormulaE World Championship.#DragonPenskeAutosport#FormulaE#PositivelyCharged#RedChrome#LetsRoll pic.twitter.com/qnJwQHvoQx