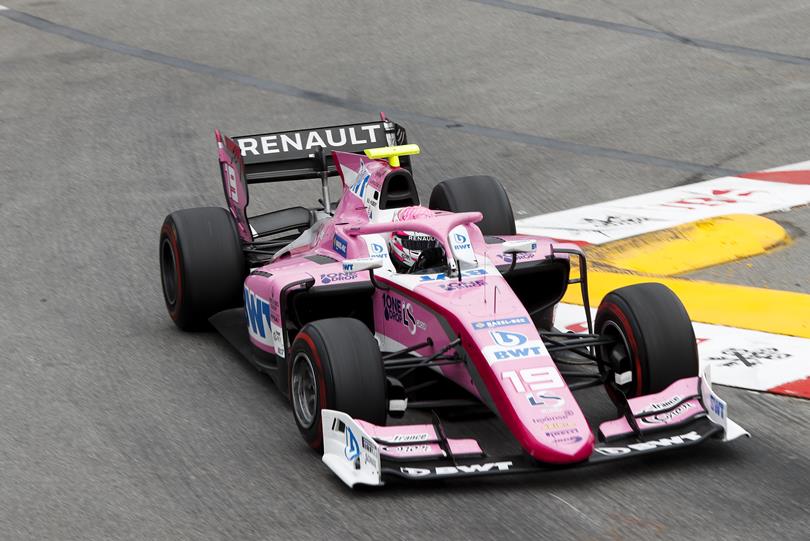 It was a good start from reverse-grid pole-sitter BWT Arden’s Anthoine Hubert to lead the way in Monaco sprint F2 race at Monte Carlo from Carlin’s Louis Deletraz with UNI-Virtuosi Racing’s Guanyu Zhou in third from MP Motorsport’s Artem Markelov.

His teammate Mahaveer Raghunathan jumped to 11th at the start but he cut the chicane for which he was handed a 10s time penalty. The Indian anyways dropped back at the end of the lap as BWT Arden’s Tatiana Calderon crashed out at Turn 5.

She was defending from UNI-Virtuosi Racing’s Luca Ghiotto but hit the barrier which caused a safety car deployment. No sooner than the race re-started with Hubert leading from Deletraz, there was another safety car period for an incident at the back of the field.

Ghiotto tried an over-opportunistic move on the inside of Raghunathan in the chicane but hit the side of the Indian with both drivers out of the race. Naturally, they were put under investigation as Trident’s Ralph Boschung retired with a mechanical issue.

The re-start, meanwhile, worked well as Hubert led Deletraz and Zhou. There was a change behind a little later on when Carlin’s Nobuharu Matsushita lost three places to drop from sixth to ninth and out of points finish.

The first time was at the chicane while the second time was on the exit of the tunnel when the Indonesian braked too late to hit Alesi and turn him around into a retirement. Meanwhile, at the front, it was all comfortable for Renault junior Hubert.

The Frenchman eased into to score his first F2 win in Monaco’s sprint race as he fended off Deletraz’s late charge, who scored his first podium of 2019 season with Zhou completing the podium positions – the Top 3 separated by just 0.8s on the line.

A one-off return for Markelov ended up on a good note with a fourth place finish with Boccolacci long way off in fifth from Camara, who fended off de Vries by 0.6s as the Dutchman took the F2 points lead with Mazepin scoring the final point.

Only Prema’s Gelael was the another finisher in 15th but he was a lap down after a pit stop with Alesi, Ghiotto, Raghunathan, Boschung and Calderon in the retirement list.

UPDATE: Ghiotto was found the guilty party in his clash with Raghunathan for which the Italian has been given a three-place grid drop for the Paul Ricard weekend. The same has been given to the Indian for cutting the chicane at Turn 1.