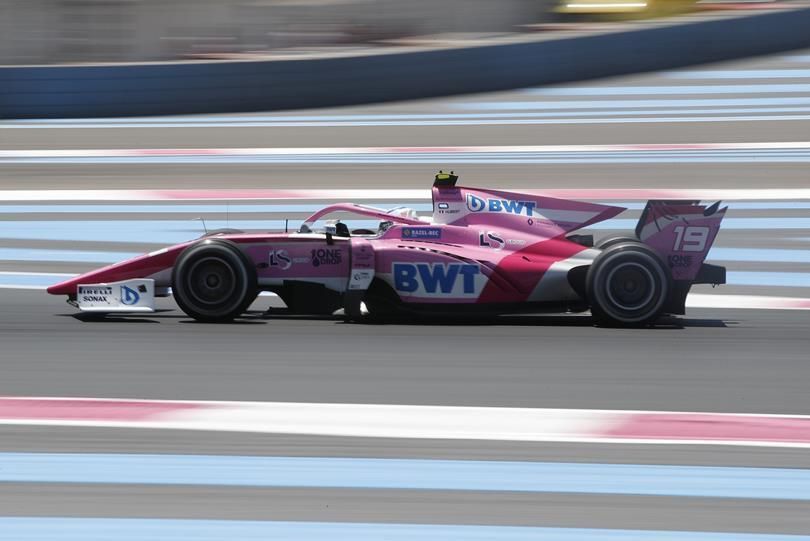 It was a solid start from reverse F2 grid pole-sitter Hubert at Paul Ricard, leading his home event as Campos Racing’s Jack Aitken moved up to second with Sauber Junior Team by Charouz’s Juan Manuel Correra dropping to third.

With Hubert leading the way, Aitken started to close in but the British-Korean was soon reeled in by Correa and Zhou and they eventually passed him one after the other as Aitken went from second to fourth in a space of few corners ahead of the DAMS duo.

Both Latifi and Camara were on his tail as Aitken lost pace to the Top 3. With Latifi unable to get by Aitken, DAMS teammate Camara made a move on the Canadian and took fifth as de Vries moved to seventh from Carlin’s Louis Deletraz with King dropping out of points.

In fact, Deletraz managed to clear de Vries as well to move to seventh as Prema’s Mick Schumacher was forced to retire with a puncture – the German yet to score since the Baku sprint race, with a double retirement from the Paul Ricard weekend.

There was more trouble for de Vries as Sauber Junior Team by Charouz’s Callum Ilott passed him to take the final point with the Dutchman also losing out to Carlin’s Nobuharu Matsushita. At the front through, there was no challenge for Hubert.

The Frenchman scored his second F2 win in Paul Ricard’s sprint race after picking up his first in Monaco’s sprint race. It was also a home race win for Renault junior Hubert with the manufacturer having another junior Zhou on the podium in their home event.

Correa scored his second F2 podium finishing second as Aitken fended off the challenge from Camara to end up fourth with Latifi scoring good points for his title hopes in sixth as Deletraz and Ilott rounded out the points scoring positions.

Among the non-points scorers, Matushita was ninth ahead of de Vries in the Top 10 as King finished 11th from UNI-Virtuosi Racing’s Luca Ghiotto, who had a close fight with Campos’ Dorian Boccolacci but managed to keep track position.