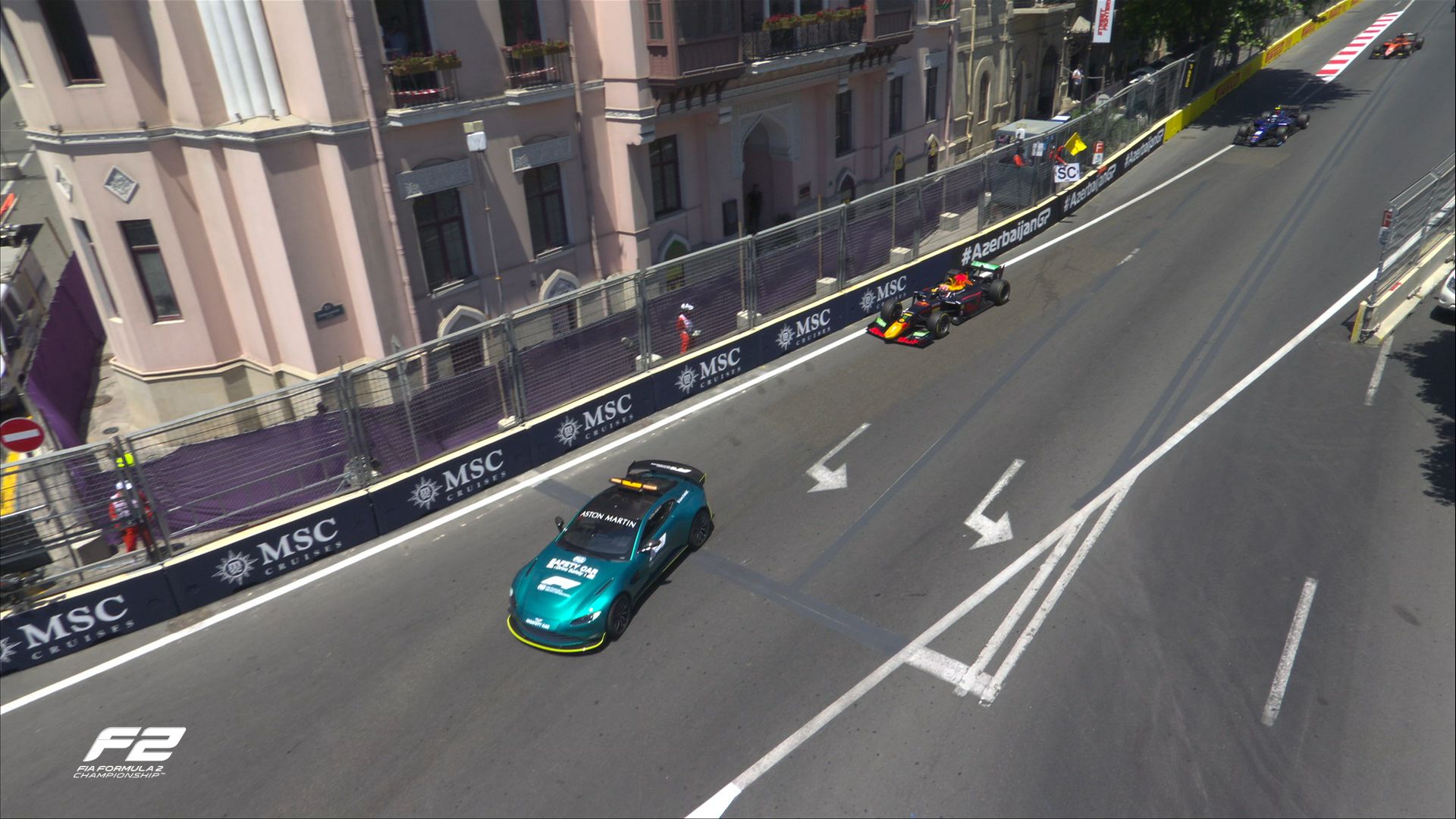 Pole-sitter Juri Vips made a clean start in his Hitech GP car in Baku feature F2 race with Carlin’s Liam Lawson slotting behind him but Prema’s Dennis Hauger lost third to Hitech GP’s Marcus Armstrong into Turn 2, with multiple changes behind them as well.

MP Motorsport’s Felipe Drugovich dropped lots of places while fighting against Trident’s Richard Verschoor, which allowed Carlin’s Logan Sargeant to be fifth from the Dutchman and Prema’s Jehan Daruvala, as the Brazilian slotted in eighth.

ART’s Theo Pourchaire jumped to ninth from 12th whereas teammate Frederik Vesti stalled on the grid to drop back. Van Amersfoort Racing’s Jake Hughes rounded out the Top 10, with a safety car deployed for incident between VAR’s Amaury Cordeel and Campos’ Olli Caldwell.

The re-start worked well for Vips as he led the way while Lawson defended well from Armstrong for second. The Estonian went wide though to break the tow and crossed the pit entry’s white line, which was showed multiple times on replay.

Hauger and Sargeant steadied in fourth and fifth, as Verschoor came under pressure from Daruvala and Drugovich but managed to hold on. The Brazilian almost hit the back of the Indian at Turn 2 which put him in the clutches of Hughes, who passed Pourchaire.

The Swiss racer lost out at the start to drop to 11th behind Virtuosi’s Jack Doohan. At the front, Vips started to stretch out his lead but Lawson came under deep pressure from Armstrong and Hauger, with the Kiwi pair going side-by-side at one point.

The pit stop started off with Daruvala going first along with DAMS’ Ayumu Iwasa. Few others dived in on the next lap, and a slow stop from Lawson saw Hauger win the place in the pits, with Daruvala winning over Verschoor in the process.

He even passed Lawson on the road but that fight cost him a place to Drugovich. All this while, a late stop from Armstrong allowed him to take net lead but he was put under investigation for unsafe release against Pourchaire.

But Vips retook the net lead after overtaking him at Turn 1, with Hauger right behind along with Sargeant, Drugovich, Daruvala, Lawson, Doohan and Pourchaire in net Top 10. The F2 race neutralised soon after a coming together at Turn 2.

DAMS’ Roy Nissany and Charouz’s Cem Bolukbasi were jostling for track position and going into Turn 2, the latter’s wheel on the inside touched with the former’s as both ended up into the barrier. The re-start from Trident’s Calan Williams was clean.

But behind him Vips was hit on the back by Armstrong who lost chunk of places and eventually had to pit due to a huge flatspot. Hauger moved to net second with Sargeant in third leading Drugovich and Daruvala in the Top 5 slot.

A moment into Turn 2 against Daruvala resulted in a puncture for Lawson who was forced to pit. As re-start moments for Iwasa and Pourchaire cost them their front wing which forced them to pit under the Virtual Safety Car for cleaning the debris.

The re-start saw Williams brake hard at Turn 2 to drop back as Vips took the eventual lead from Hauger who was right on his tail. Sargeant had Drugovich and Daruvala in the fight for third, as Doohan cleared Fittipaldi for sixth with Verschoor in eighth.

Campos’ Ralph Boschung slotted in ninth from ART’s Vesti in the Top 10. There were multiple investigations for re-start, with Hughes, Iwasa, Boschung and Pourchaire all under investigation, while Doohan was handed 5s penalty for colliding with Lawson.

While Vips led the way, Hauger continued to pile on the pressure. And the Estonian binned it in the Castle section after clipping the inside wall and smashing on the right. It handed the lead and a feature F2 race win to Hauger after it became a timed event.

Sargeant ended up second as F2 points leader Drugovich was third to extend his lead, while Daruvala was fourth to keep his hopes alive. Doohan was fifth but a 5s penalty dropped him to outside the Top 10, as Verschoor ended up fifth.

#F2 #AzerbaijanGP Now that was one heck of a chaotic feature race, which ended on time instead of number of laps. Vips, from the lead, crashes out in final minutes. Here's the provisional result as some situations are still under review. #MsportXtra @BakuCityCircuit @F2Inside pic.twitter.com/lJtzCLaJFe

UPDATE: There were several stewards report post the feature F2 race with the big one involving Amuary Cordeel who has been handed with a race ban in Silverstone after he accumulated 12 penalty points on his superlicense.

He made contact with Caldwell at the start of the race for which he was adjudged as the guilty party and handed a 3-place grid drop for the next race he takes part in. The one penalty point that he got made it 12 penalty points in all for him.

“In accordance with Article 39.3 of the FIA Formula 2 Sporting Regulations, as the
Driver of Car 25 has accumulated 12 penalty points (see Document 50), the Driver of
Car 25 is suspended for the Event following the Round 6 Baku Event,” stated the stewards.

In another larger incident, Bolukbasi was handed a fine of 5000 euros after his father Yavuz Bolukbasi was found guilty to having an altercation with Nissany’s trainer. After the incident between the two drivers in the race, Yavuz dropped into DAMS’ team tent.

He thought Nissany made derogatory comments against Bolukbasi and the argument got heated which involved pushing. As a result, the Turkish driver was fined, while his father’s credentials has been withdrawn for the next event which is Silverstone. Nissany, meanwhile, was adjudged as the guilty party in the incident and has received a 3-place drop for the next race.

“The Stewards summoned and heard the team representatives (documents 48 & 49),” started the stewards statement. “The following persons were present at the Hearing in addition to the panel of Stewards.

“As the verbal exchange escalated the trainer for Roy Nissany became involved and there was some pushing and physical contact between the father and the trainer (Francesco). No punches were exchanged and the unwanted guests were removed from the area. At no time will physical violence, nor the threat of such be tolerated. In keeping with ISC Art 9.15.1 Competitors are responsible for all acts of persons to whom they have given access to the Reserved Areas. The threat of violence and the actual minor scuffle that took place as initiated by Mr Bolukbasi are determined to be a breach of ISC 12.2.1(c). Accordingly the Driver is fined and the individual initiating the offence is sanctioned.”

Among other incidents, Iwasa, Boschung, Vips, Pourchaire, Armstrong were all cleared of any trouble. 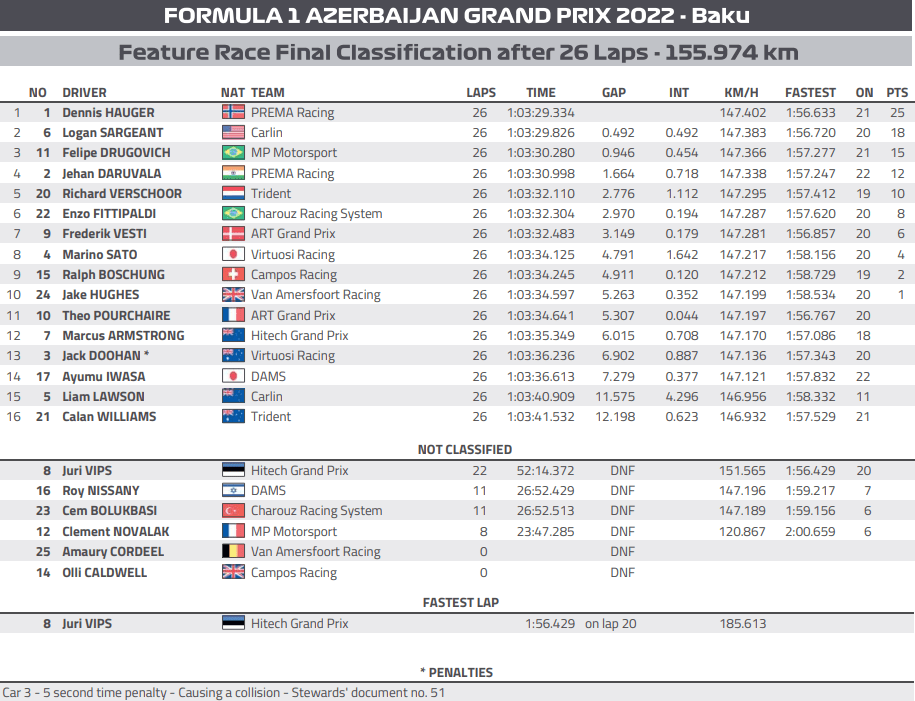 Here’s how sprint F2 race panned out in Baku