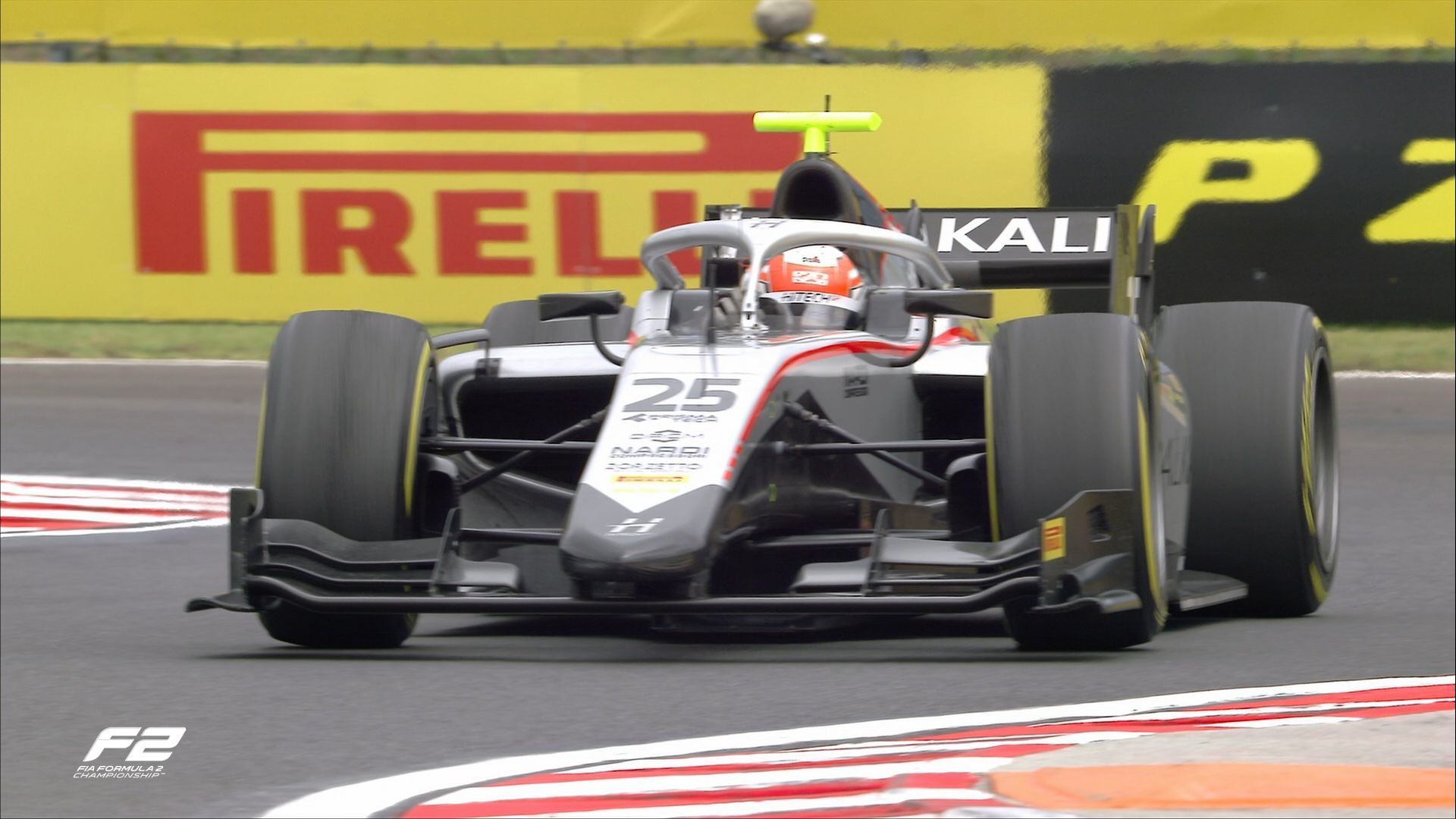 The drying Hungaroring track posed a challenge for the F2 drivers in the sprint race as the field was spread in terms of tyres with some opting for soft and some for medium. Revser-grid pole-sitter UNI-Virtuosi Racing’s Callum Ilott led the way nicely.

HWA Racelab’s Giuliano Alesi did well to hung on to seventh with Carlin’s Jehan Daruvala chasing him as the Top 10 had Campos Racing’s Jack Aitken and DAMS’ Sean Gelael. Meanwhile, Schumacher and Shwartzman passed Deletraz to be third and fifth.

The tyre situation started to come into play as the soft-runners were struggling hugely, while the medium runners also started to come under pressure. The likes of Daruvala, Aitken, Deletraz and Gelael pitted to change to the medium.

In fact, the rest of the F2 field also pitted to change to tyres but race leader Ghiotto and Alesi stayed out to lead the way from first of the stoppers, Ilott. The Brit though caught up with the Frenchman and passed him for second in the chase of the Italian.

Schumacher popped up and passed both Deletraz and Alesi to be third as Shwartzman moved up to fourth with Mazepin in fifth as the Swiss racer dropped to sixth. Daruvala was seventh with a faster UNI-Virtuosi Racing’s Guanyu Zhou behind.

At the front, Ilott was ever close to Ghiotto but the Italian just hung on to eventually win the sprint F2 race without having stopped by a mere 0.4s – it is also Hitech GP’s first. Schumacher rounded out the podium with teammate Shwartzman just behind.

Mazepin ended up fifth as Deletraz was sixth but he just managed it from Daruvala, who was mere 0.3s behind. The final point went to Zhou, who passed ART Grand Prix’s Marcus Armstrong late in the day with Alesi rounding out the Top 10.

The sprint F3 race at Hungaroring was underway in slippery conditions as pole-sitter Trident’s David Beckmann got away nicely but was struggling in the first few laps as Hitech GP’s Dennis Hauger came through to take the lead of the race.

Prema’s Oscar Piastri and Logan Sargeant along with MP Motorsport’s Richard Verschoor and Bent Viscaal hurried on the leaders as they got bunched up together when Hitech GP’s Liam Lawson stopped on track due to engine troubles.

Prema’s Frederik Vesti also retired as Hauger got away nicely on re-start but Viscaal was the driver on charge as he leapt upto third and fighting for the win. The Dutchman, though, carried a five-second penalty along for a collision.

He found his way through Beckmaan and Hauger as well to lead and even built up a five seconds gap as well. However, he got another penalty for leaving the track and gaining an advantage which meant, it would be hard for him to hang on.

It got worse for Viscaal when Jenzer’s Federico Malvestiti had a crash to bring out the safety car. Even though the Dutchman finished first on the road, he was classified 17th eventually as Beckmann took the win in sprint F3 race.

Piastri got through Hauger to second with the Norwegian securing his first podium as Sargeant ended up fourth from Verschoor. The ART trio Theo Pourchaire, Aleksandr Smolyar and Sebastian Fernandez were fifth, sixth and seventh.

The Russian had a superb outing having come through the pack to get in the points, with the Top 10 seeing HWA Racelab’s Enzo Fittipaldi and Campos’ Alexander Peroni with Hitech GP’s Max Fewtrell missing the final point.

Here’s how the feature F2 and F3 race panned out