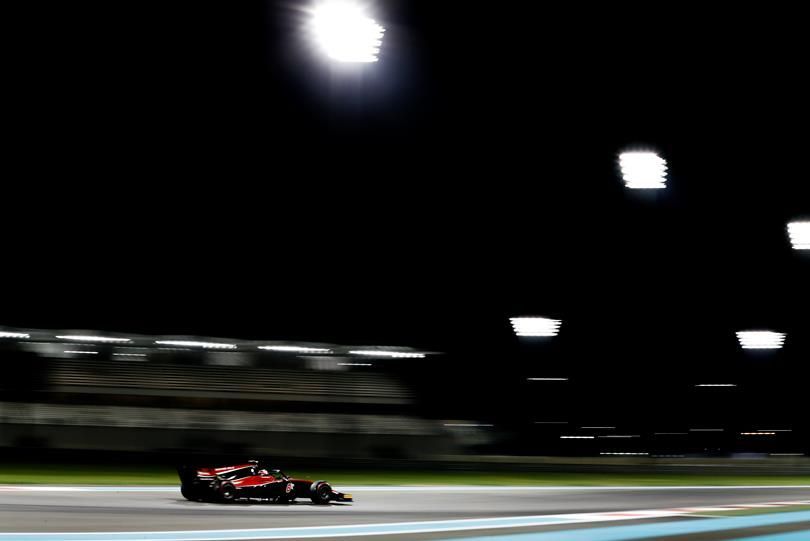 After two years of Prema domination, ART GP regains the glory of past times. The teams championship, however, goes to Carlin Racing in their first season in the category. Russian Time’s Artem Markelov and Campos Racing Luca Ghiotto joined the Brit on the podium.

The start saw several cars stall on the grid as seen in the majority of the races this season. This time, however, the consequence was much higher when a car rammed into the back of the stationery car.

Carlin’s Sergio Sette-Camara, DAMS’ pair of Alexander Albon and Nicholas Latifi stalled, but Latifi was the unluckiest as Trident’s Arjun Maini hit the back of his DAMS when he was un-sighted by Arden’s Dan Ticktum.

The Safety Car period allowed Albon and Sette-Camara to rejoin the race and unlap themselves. At the front though Prema’s Nyck de Vries overtook Russell at the start and led the pack with Russell close behind.

The re-start saw many drivers dive into the pits to change tyres where de Vries lost the lead to Russell due to a slow stop. He came out in front of Markelov with the Russian close to clearing him as well.

MP Motorsport, Niko Kari hit the barrier on Lap 12 after driving over the kerb in Turn 20 but he was able to drive back to the pits and continue in the race. At the front, Norris started to climb up as he cleared Deletraz and Markelov in a space of few laps.

But Markelov did not budge as he continued battling him for track position. Albon pitted with 10 minutes to go when running ninth as Ghiotto led with a 24s advantage over Russell after taking the most out of his tyres.

However, the Italian driver got a five second penalty for leaving the track and gaining an advantage which he had to serve during his pit stop. Markelov then cleared de Vries for third in his chase of Russell.

A late stop for Ghiotto worked as he still had time to overtake both Norris and de Vries for the final podium position but did not have the legs to clear Markelov who ended up second behind the race winner and 2018 champion Russell.

De Vries had to settle for fourth from Norris with Deletraz heading teammate Fuoco in sixth as Merhi, Russian Time’s Tadasuke Makino and Aitken completed the Top 10 with Ticktum doing well on his debut to be 11th. Albon could only manage 14th after a disaster start.