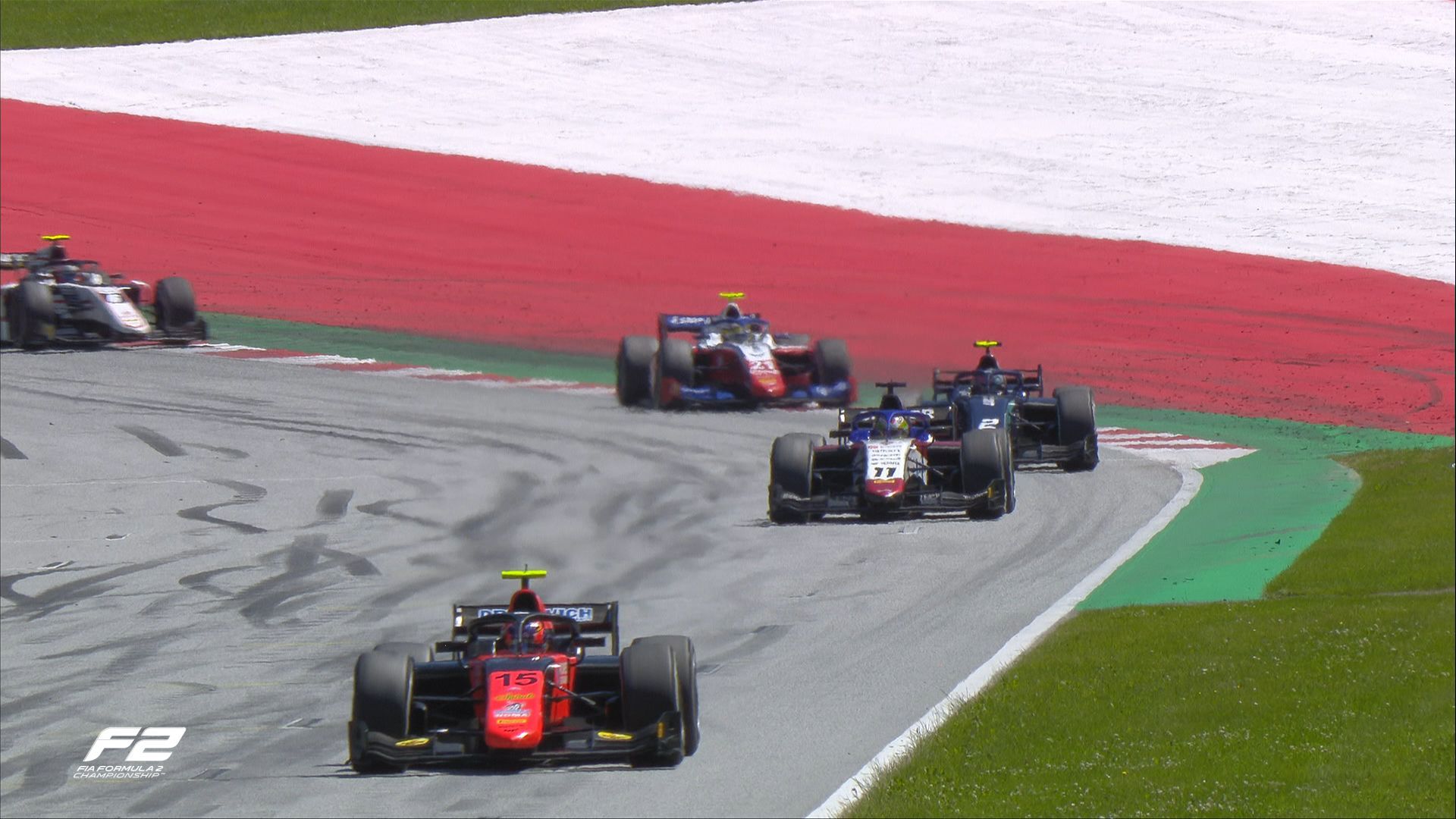 Prema’s Robert Shwartzman was up to fifth with ART’s Christian Lundgaard in sixth after an off moment, while MP Motorsport’s Nobuharu Matsushita slotted in seventh and UNI-Virtuosi Racing’s Callum Ilott remaining in eighth, where he started from.

A safety car was deployed for HWA Racelab’s Giuliano Alesi, who came to a screeching halt. The period was extended with DAMS’ Sean Gelael also stopped to retire. The re-start worked well as the Top 3 maintained their positions with Drugovich leading.

The grid, however, was back under safety car when Carlin’s Jehan Daruvala spun Hitech GP’s Luca Ghiotto around where UNI-Virtuosi Racing’s Guanyu Zhou had to take an evasive action too. The Italian was forced to retire after being beached onto the gravel.

The re-start worked well for Drugovich again as he led Deletraz and Armstrong. Behind, HWA Racelab’s Artem Markelov had a front wing damage after clouting the back of Daruvala when he was fighting Campos’ Guilherme Samaia.

Just when things got going, there was another safety car when ART’s Armsrtong came to a halt due to power issue which helped Ticktum to be third. Daruvala, meanwhile, was handed a five second penalty for causing a collision.

The re-start from Drugovich was superb once again as he led Deletraz and Ticktum. The positions behind stayed as it is as Prema’s Mick Schumacher was chasing Matsushita for seventh, which raged on until the final of the sprint F2 race.

It was just seeing-through eventually for Drugovich to score his first F2 win at Red Bull Ring as Deletraz and Ticktum rounded out the podium position. The Brit came under pressure from Shwartzman but fended off well with Lundgaard in fifth.

Daruvala ended up 14th but the penalty dropped him to 16th behind Zhou and Samaia as Trident’s Marino Sato was 17th with Markelov in 18th – a lap down. DNF: Armstrong, Ghiotto, Gelael, Alesi.

#F2 – Full results of the Sprint Race of the @FIA_F2
championship in #Austria 🇦🇹 ⬇️ pic.twitter.com/6k5AJY2ZiK

It wasn’t long for Novalak to come under pressure as Beckmann pushed him to the brink and eventually took the lead as the Carlin driver ran wide in an attempted retake of the lead, which had him lose out to Lawson as well.

And soon enough, Lawson made the move to get by Beckmann, who dropped to fourth after losing to Novalak and Verschoor. The Dutchman was the driver on the charge as he managed to get through the Carlin racer to take second.

The moves came after Virtual Safety Car period for Campos’ Alexander Peroni, who lost power as Prema’s Logan Sargeant suffered a puncture. A safety car was called out when Charouz’s Roman Stanek ran through the DRS board in the final corner.

The safety car eventually helped Lawson as he managed to held off Verschoor to scored his first win in F3 at the home race for Red Bull as Novalak rounded out the Top 3. Beckmann was fourth with Trident teammate Lirim Zendelli in fifth.