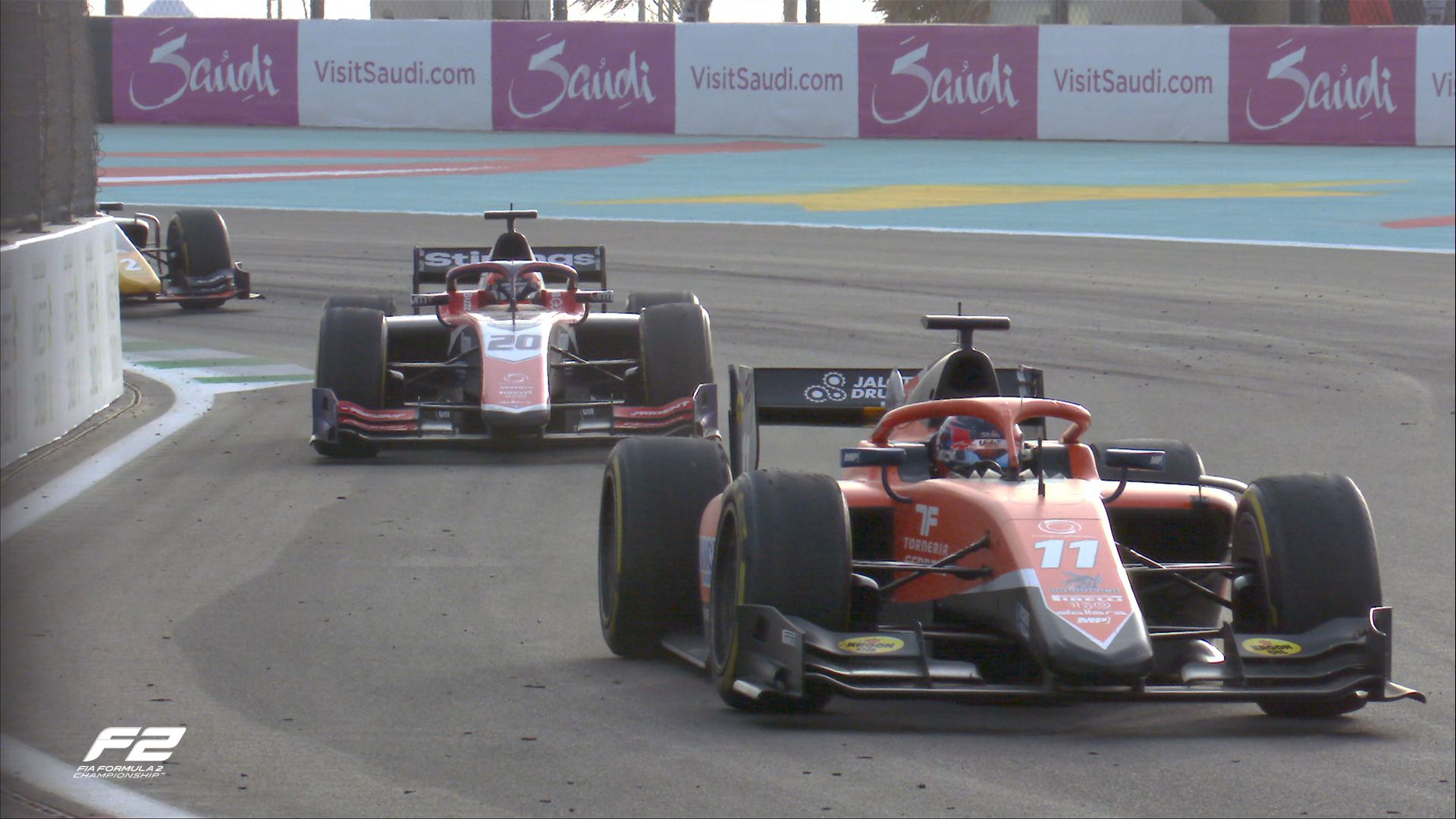 The FIA Formula 2 (F2) Feature race in Jeddah was a surprisingly sedate affair on the race stoppage front, with no sign of a safety car throughout the 27 lap race which was eventually won by Felipe Drugovich.

It began with an unusual start abortion which initially came unexplained and with no official reason given as to why the extra formation lap was necessary. When the race did get underway polesitter Felipe Drugovich in his MP Motorsport car led Richard Verschoor’s Trident and Marcus Armstrong, in the Hitech, off the line on Lap 1 – maintaining the status quo throughout the opening few laps and stint.

Juri Vips was one of several who made up a place on the first lap, with the Hitech GP driver making up a singular position into 7th. Campos’s Ralph Boschung and DAMS’ Ayumu Iwasa battled for 5th place on the second lap which was closely followed by a chaotic three wide moment which saw Prema’s Jehan Daruvala move up to 9th behind them.

Iwasa came back on Boschung on only the fourth lap, putting pressure on the Swiss driver that inevitably led to a pass at the T1-2 chicane after Boschung took to the run-off area and subsequently earned himself a five-second time penalty for leaving the track and gaining an advantage.

Verschoor stayed with Drugovich, pulling away from Lawson in 3rd as Daruvala and Sato pitted at the earliest opportunity on Lap 7 – just as a yellow flag came out for the first retiree of the race, Theo Pourchaire, who’s ART suffered a gear selector issue but survived long enough to make it to the pits.

After race leader Drugocivh pitted, Trident’s Vershcoor pitted laps afterwards but failed to take the net-lead away from the Brazilian. Seconds later, the net-third placed Carlin of Lawson pulled over at the end of the pit lane with a loose wheel from his pit stop.

MP’s Clement Novalak and Virtuosi’s Jack Doohan lit up the screens after the half distance mark with a feisty battle which saw the last place starter of Doohan attacking the French-Swiss driver twice into Turn 1 and 2. At his second attempt Doohan successfully made the move stick.

The Prema of Dennis Hauger led a proportion of the second half of the race before making his first pit stop, with his team eventually giving him the call to give it everything and head to the pit lane on Lap 23. Coming out of the pits Hauger locked both his front wheels slowing for the bend in the pit exit, replicating what Verschoor’s team-mate Calan Williams did earlier on in the race.

Doohan battled intently with Vips for 9th position with only a couple of laps to go, squeezing the Estonian hard into Turn 1 and making the overtake work around the outside. Enzo Fittipaldi positioned his Charouz superbly to stay with Vips and launch an attack for 10th.

The ART of Frederik Vesti brought out the yellow flags on the last lap with a somewhat piteous looking spin, but nothing could prevent Drugovich from clinching the victory in feature F2 race in Saudi Arabia.

Verschoor and Daruvala joined him on the podium – with the Indian climbing from 14th to third in the alternate strategy – followed by the Van Amersfoort driver of Jake Hughes, Armstrong, Hauger and Iwasa, where the F3 champion scored his first points. Roy Nissany in the DAMS finished 8th with Doohan and Vips making up the top ten.

Drugovich leads the drivers’ championship by 11 points, with Lawson and Verschoor making up the top three going into the third round in Imola in a few weeks time.