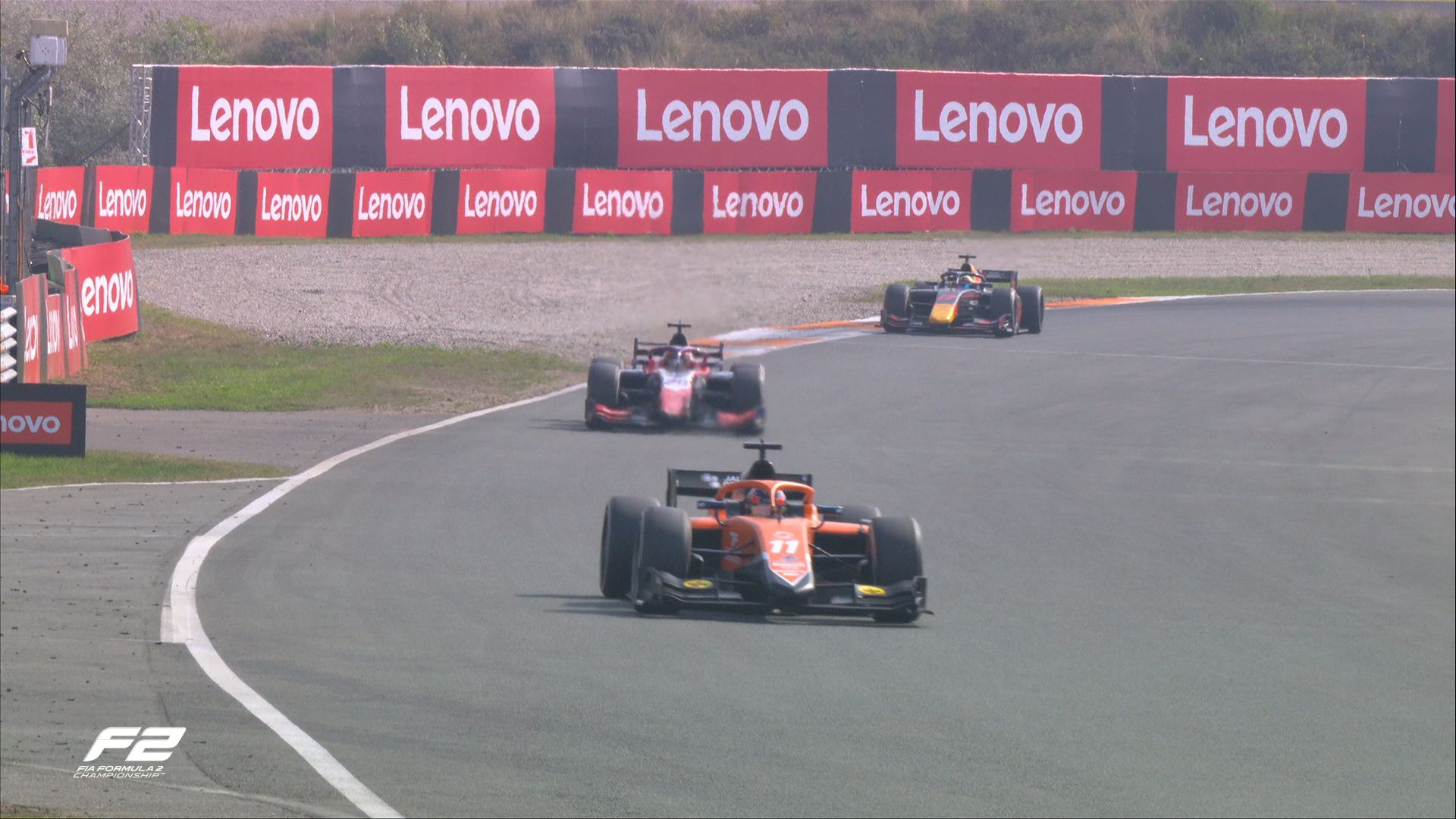 The feature F2 race at Zandvoort saw pole-sitter Felipe Drugovich lead the way in his MP Motorsport car from Virtuosi Racing’s Jack Doohan, who had a lock-up going into Turn 1. Behind him Carlin’s Logan Sargeant went off straight on the gravel.

He re-joined at the back and then had a contact with Campos’ Ralph Boschung, where he went straight onto the tyre barrier. The race was red-flagged for barrier repairs, as Drugovich led Doohan and Prema’s Dennis Hauger in the Top 3.

The red flag showed replays of incident between DAMS’ Roy Nissany and VAR’s David Beckmann who were fighting over track position ever since the safety car was deployed and eventually made contact with the incident to looked at after the feature F2 race.

The re-start worked well for Drugovich to lead from Doohan, who tried hard to pass the Brazilian but once again locked-up at Turn 1. Meanwhile, a misery of a weekend continued for Prema’s Jehan Daruvala who had a spin to drop back to 19th.

The pit stop melee started as Drugovich held on track position over Doohan, but the Australian lost to Verschoor who got in between them after a late stop. The Virtuosi driver then came back on the Dutchman to retake the place.

Iwasa was behind them as Hauger lost a couple of places due to an early stop. It was Lawson in the lead from Armstrong and Vesti without having pitted, as a safety car was deployed for Virtuosi’s Marino Sato who had a lose front-left post the pit stop.

It was a nasty re-start with Lawson waiting a bit late which caused chaos behind where Verschoor hit the back of Doohan. At the same time, Calderon and Novalak also came together as the race for three ended with the Dutchman continuing.

Daruvala, meanwhile, pitted for the soft tyre when the pitlane was closed. The Indian was helped by that as the re-start saw drivers pit and drop back in the order. He climbed up in the Top 10 with fresher tyres as the FIA put the second re-start under investigation.

Drugovich took the feature F2 race lead from Verschoor, who continued on despite a damaged nose. Iwasa was third from Hauger with Charouz’s Enzo Fittipaldi climbing up to fifth from Cordeel, Vips, Beckmann, Campos’ Olli Caldwell and Daruvala.

The race turned to a timed one due to lack of time to complete all the 40 laps. Drugovich held on to win the feature F2 race at Zandvoort, with Verschoor doing well in second from Iwasa, Hauger and Fittipaldi in the Top 5.

Cordeel pressured him but held on to sixth to score his first points, with Vips in seventh from Beckmann, Caldwell and Pourchaire, who passed Daruvala on the final lap to take the final point in 10th after making up about 13s since his stop.

UPDATE: Roy Nissany and David Beckmann have been handed 10-second time penalties for driving erratically under the Safety Car. The pair made contact under Safety Car conditions during the Feature Race. The post-race penalty drops the DAMS driver from 15th to 17th in the final classification. Beckmann’s penalty drops him down from eighth to 16th in the final classification.

With the Van Amersfoort Racing driver dropping out of the points, it promotes Jehan Daruvala into 10th position. Along with the time penalty, Nissany received two penalty points, taking his total to 13 for the season meaning he will be suspended for the next round at Monza.

While the duo got penalties, Lawson was let go for the re-start situation along with Verschoor. “The Stewards examined video evidence. They summoned and heard the drivers and team representatives (documents 35, 36 & 37). Having considered the matter extensively, the Stewards determined that Car 5 accelerated very late just before the Safety Car Line. Additional the Driver of Car 5 was weaving prior to his restart. Further back in the field of cars there was a collision between Car 20 and Car 3.

“Car 20 was not able to brake and ran into the back of Car 3 who subsequently retired. The Stewards don’t like to see restarts conducted in this way but finally couldn’t find any breach of the Sporting Regulations, hence the decision of No Further Action. The Driver of Car 3 stated after the announcement of the Decision that he concurred that it was a racing incident,” the stewards note stated.

#F2 #DutchGP Confirmation that Roy Nissany has gathered 13 penalty points so far, which is too much so he gets a race ban for Monza next weekend. #MsportXtra pic.twitter.com/r8Ayw8zYoS

With the sun peaking over the horizon, it was an early start for pole sitter Maloney as he sought to bring home his second consecutive Feature Race victory. That would be no easy feat, however, with four of the top six title contenders lining up on the first three rows. Martins took his place on the front row, ahead of Crawford and Stanek, as Hadjar parked up in P6. Meanwhile, PREMA’s Bearman and Leclerc faced a daunting fightback on their hands from P14 and P20 respectively.

Martins would have been rubbing his hands with glee as the ART Grand Prix driver nailed his getaway off the line, immediately going side-by-side with Maloney up the inside of Turn 1. The Trident driver attempted to cover him off but went wide soaring over the kerbs. Luckily, he was able to recover but dropped behind the Frenchman, as Colapinto eyed up the rear end of Crawford’s PREMA.

Further back, Bearman’s day went from bad to worse. A poor start saw the Ferrari Academy junior lose three places at lights out, allowing Leclerc to close in on his teammate. The Monegasque showed no hesitation in trying to lunge around the outside of Turn 1 but to no avail.

With the battles showing no sign of settling down, it wasn’t long until the Safety Car made its first appearance of the weekend on Lap 4. Brad Benavides was caught out by William Alatalo’s braking point into Turn 2, clacking into his rear end and sending the pair through the gravel and into retirement.

Martins left it late on the restart, stopping Maloney from getting the run-in along Turn 14’s banking and allowing the Frenchman to pull clear along the main straight. This left the Bajan driver vulnerable to Crawford behind with the Red Bull junior gambling on a move around the outside of Turn 1. Unfortunately, the attempt backfired as the American suffered a heavy lock-up, skirting his wheels across the grass and dropping him down to ninth.

Several drivers were getting their elbows out to climb up the order. Sprint Race winner Collet muscled his way past Edgar up the inside of Turn 3 for sixth, leaving the door open for Montoya to follow him through past the Trident driver.

It was time for Maloney to repay the favour to Martins for the lead on Lap 12. Going on a battle of the brakes into Turn 1, the Trident driver repeated the ART’s earlier move to regain his place at the front of the pack. Meanwhile, Crawford was on a recovery charge, swinging his way past Edgar and Montoya to steal seventh.

There was no doubt Martins was beginning to struggle. A rough looking left front tyre left him vulnerable to Colapinto behind but the Van Amersfoort Racing driver couldn’t get past him, as the race leader Maloney pulled over a second clear of the chaos behind.

Another curveball would soon be thrown the field’s way. Campos Racing’s David Vidales pulled over at Turn 2 to bring out the Virtual Safety Car on Lap 17, which became a full Safety Car two laps later. On the restart, Bearman’s charge through the pack continued. The Brit refused to give in, jostling his way past two cars in two corners. In what was probably the move of the season, the red and white PREMA found the limit to dispatch Alexander Smolyar and Grégoire Saucy before barging his way past Zak O’Sullivan into the points.

Racing would soon ground to a halt once more, as Rafael Villagómez skidded off into the gravel trap after contact with Juan Manuel Correa to bring out the Safety Car on Lap 24. This created a two-lap charge to the end, and it was Maloney who went early this time around, but Martins was alert to his idea and stayed with him.

It seemed only the finish line could bring an end to Crawford’s rapid pace, as the American moved through into sixth on the final lap after Collet suffered a heavy lock-up into Turn 1. Yet it was all about Maloney who added 25 points to his name and soaked up the celebrations of his second victory of the year, ahead of Martins and Colapinto.