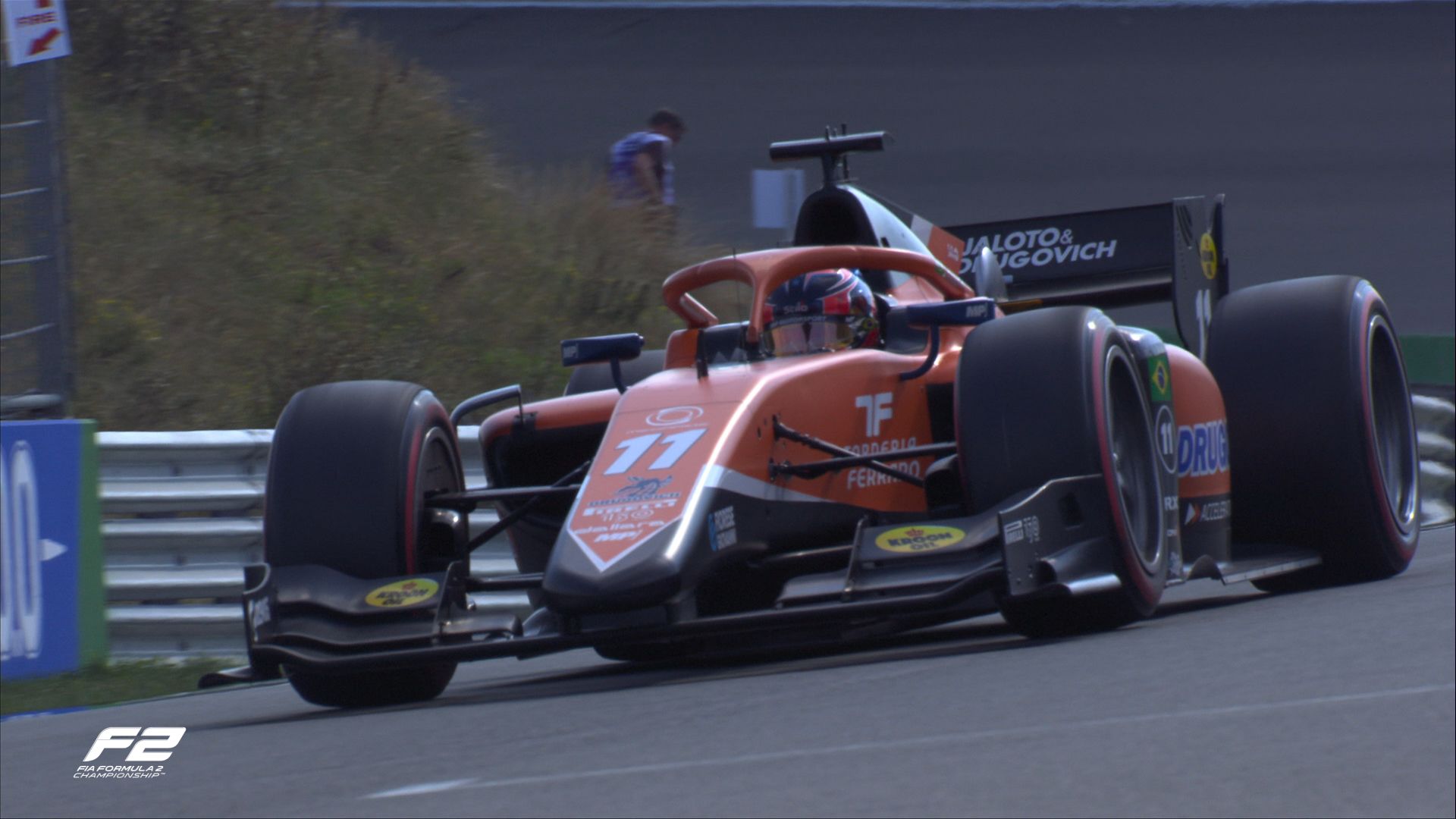 Felipe Drugovich claimed feature F2 race pole at Zandvoort from Jack Doohan after double red flag, as Zane Maloney had it in F3.

Before the first part of F2 qualifying at Zandvoort could be over, there was a red flag when ART’s Theo Pourchaire lost control and crashed onto the barrier of Turn 3 after setting the fourth fastest lap with about 21 minutes remaining on the clock.

It was Virtuosi Racing’s Jack Doohan at the top for that moment with a 1m21.760s lap as he led F2 points leader MP Motorsport’s Felipe Drugovich and Prema’s Dennis Hauger. The Italian team seemingly started well with Jehan Daruvala in fifth.

Several others were on course to improve on their lap times when red flag ruined their chances. After a long barrier repair, most took to the track while some remained in the pits, as DAMS’ Ayumu Iwasa and Carlin’s Logan Sargeant to improve to second and third.

Drugovich dropped to fourth as MP Motorsport’s Clement Novalak and Campos’ Ralph Boschung tried different strategy to set their laps when others were in the pits. The final part of qualifying saw Drugovich put in a strong lap of 1m20.713s to go fastest.

Doohan was second from Sargeant with Trident’s Richard Verschoor slotting in fourth from Carlin’s Liam Lawson, with one more lap remaining. But there was another red flag with less than four minutes to go after a spin for Daruvala.

Post red flag, ART’s Frederik Vesti looked to improve on his time but for a gravel moment after he caught the back of DAMS’ Roy Nissany. Drugovich remained the pole-sitter for feature F2 race as he led Doohan and Sargeant in the process.

Verschoor was fourth from Iwasa who improved on the last lap, pushing Lawson to sixth with Hauger in seventh from Hitech GP pair of Juri Vips and Marcus Armstrong, as Novalak was 10th to secure sprint race pole for Saturday’s F2 race.

#F2 #DutchGP Qualifying results as the top 10 will get reversed as the starting grid for tomorrow's Sprint Race with Novalak on pole. #MsportXtra @CMCZtweets @f1dutchgp @F2Inside pic.twitter.com/XZDwU3wQpv

Zane Maloney exuded confidence as he claimed his second pole position of his rookie Formula 3 season in Zandvoort, whilst Victor Martins reignited his title hopes by securing a spot on the Feature Race front row alongside the Trident driver.

There were mixed fortunes for the rest of the Championship contenders once again, as Jak Crawford and Roman Stanek snatched third and fourth, ahead of Isack Hadjar in fifth. However, PREMA Racing’s Oliver Bearman and Arthur Leclerc endured a disastrous ending to their running, crossing the line moments after a last-minute Red Flag and forcing the pair to settle for P14 and P20 respectively.

After two Virtual Safety Car appearances in Practice, it was no surprise that a queue of cars formed along the pit lane as the lights went green, with the whole field eagerly heading out early to try and get a banker lap in.

With the sun beaming down along the Circuit Zandvoort, it was Martins who shone from the get-go. The Frenchman immediately set out to put the benchmark down to his rivals, clocking in a 1:25.152 to go over a tenth clear of Franco Colapinto. Meanwhile, the strong one-lap pace that Trident demonstrated in Spa-Francorchamps showed no signs of disappearing with all three of the Italian team’s drivers slotting into the top five on their first attempts.

However, things weren’t so smooth for Hadjar with the Hitech Grand Prix driver running wide into the banking, whilst Campos Racing’s David Vidales found himself locking up heading into traffic. With most of the field unable to improve on their second push lap, a parade of cars peeled into the pits – except Charouz Racing System’s Francesco Pizzi. Unfortunately for the Italian driver, running in the gap failed to pay off, catching up to a train of cars into the opening corners, thereby ruining his chance at moving up the order.

As the clock ticked down to 16 minutes, it seemed the perfect time for Caio Collet and the rest of the field to head back out on track. The MP Motorsport driver instantly looked strong as he slotted into second, only 0.020s off Martins’ leading time. Yet the ART Grand Prix driver was on a charge of his own, laying down a personal best in all three sectors with a 1:24.676 to improve on his provisional pole time by four tenths.

Off the back of his maiden victory last time out in Spa-Francorchamps, Maloney set about claiming his spot on the front row for the third consecutive race. His 1:24.386 became the new benchmark with eight minutes remaining.

A quick return to the pits left the field fighting their way through one another in the dying minutes of the session. Track evolution meant it looked to be a last gasp drag race to cross the finish line right before the chequered flag. However, things wouldn’t pave out that way as William Alatalo found the barriers at Turn 3. The Red Flags were thrown to recover the Jenzer and bring a premature end to running with less than a minute to go.

Fortunately for Martins, he managed to get his lap in by the skin of his teeth to solidify his hold on P2. Despite being unable to see his final attempt through, Maloney managed to hang on to the top spot by 0.289s. Crawford finished the session third, ahead of Stanek in fourth.

Outside the top four, Colapinto claimed fifth ahead of Hadjar. Meanwhile, Sebastian Montoya’s F3 debut got off to an impressive start as the Campos Racing driver claimed seventh. Trident were the only team to have all three drivers inside the top 10 with Jonny Edgar in eighth, ahead of Collet and Carlin’s Zak O’Sullivan.

Lining up on reverse grid pole, Juan Manuel Correa will be hungry for his first podium finish of the 2022 season in the Sprint Race. He’ll have familiar company on the front row in the form of ART teammate Grégoire Saucy.

Title contenders Bearman and Leclerc were amongst several drivers who weren’t as fortunate at the end of the session, as the Red Flag denied them any attempt to complete their laps and improve, setting the PREMA pair up for another fightback through the field when the lights go out at 10:25 local time tomorrow.

#F3 #DutchGP RED FLAG with 44 seconds left so that's it. Qualifying results in which the top 12 will be reversed as the startingorder for tomorrow's Sprint Race with Correa on pole. #MsportXtra @CMCZtweets @f1dutchgp pic.twitter.com/K1VkEGgagy