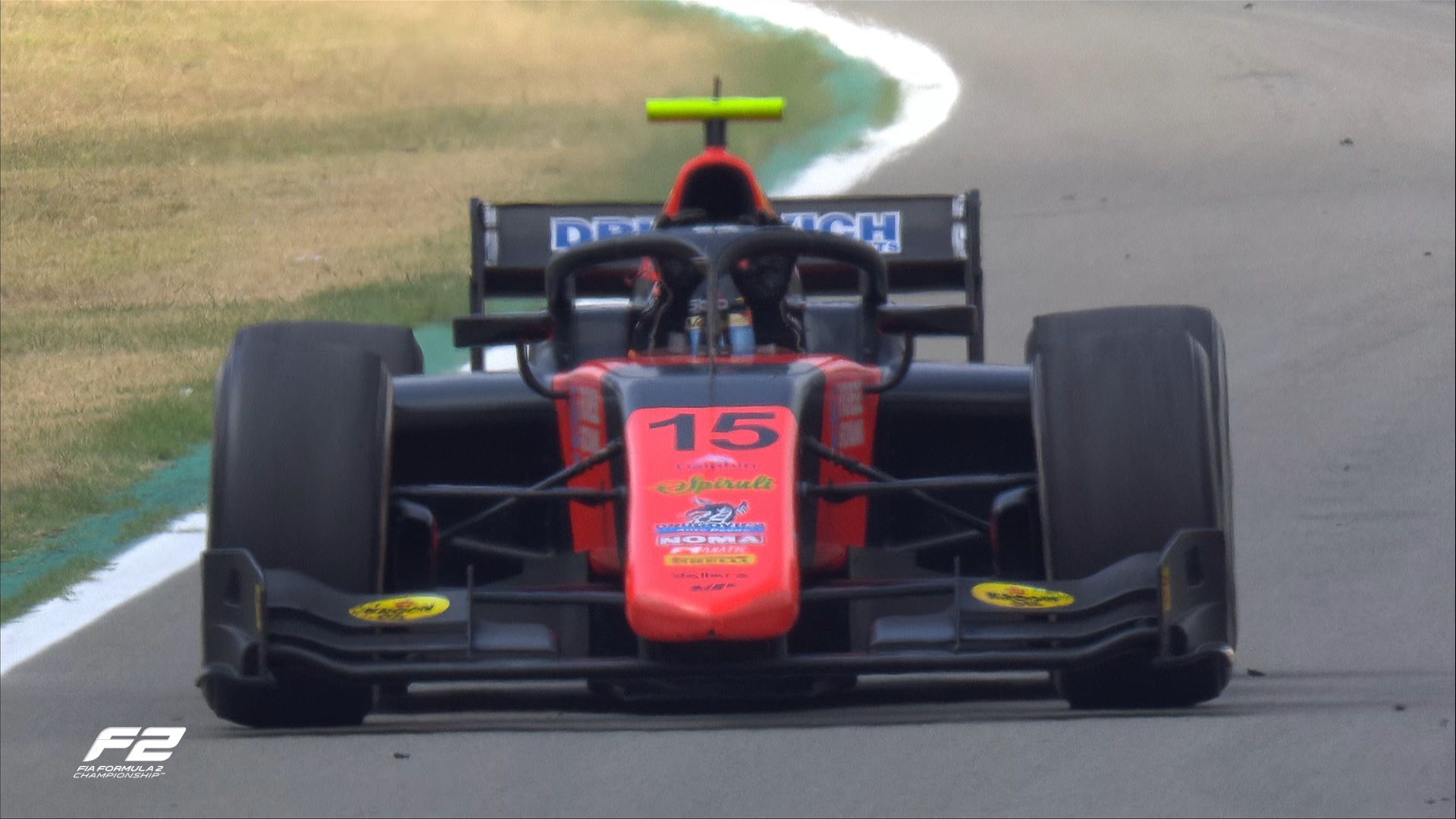 It was status quo for a long time as the F2 drivers started to look after their tyres. A move came from Hitech GP’s Nikita Mazepin on Charouz’s Louis Deletraz but it was outside the points position in ninth as ART Grand Prix’s Christian Lundgaard started to look in as well.

The Dane tried hard to pass Deletraz and even made the move but only to go wide and drop back again. At the front, Drugovich checked himself out nicely as Ghiotto held up the back of Ilott and Schumacher chasing him for second.

And soon it brought Zhou, Tsunoda and Matsushita in the fight too. While this happened, Shwartzman fell into the clutches of Mazepin as the latter eventually passed him for the final point in eighth as up ahead the Japanese racer passed the Chinese for fifth.

Zhou eventually lost to Matsushita as well as a lock-up punctured his tyres which forced him to pit. His teammate Ilott lost third to Schumacher and even to Tsunoda to drop to fifth as Mazepin and Lundgaard moved to seventh and eighth respectively.

But Lundgaard lost the place to Charouz’s Pedro Piquet, who even got ahead of Ilott after the Brit lost to Matsushita. At the front, though, it was clean from Drugovich to win the sprint F3 race in a commanding way by over nine seconds.

Ghiotto held onto second with Schumacher completing the podium with Tsunoda doing a solid job in fourth from Matsushita, Mazepin, Piquet and Lundgaard in the Top 8. The Dane passed Ilott for the final point after going off at one corner.

The move was put under investigation as he was given a five seconds penalty which got Ilott the point again as Lundgaard dropped to 11th as Deletraz held off revived Ticktum for ninth, who pitted for the soft compound and charged his way up.

Reverse grid pole-sitter Jenzer Motorsport’s Matteo Nannini did not have a great launch in the sprint F3 race at Circuit de Catalunya-Barcelona as he bogged down which allowed fifth-placed starter Prema’s Oscar Piastri to shoot into the lead.

Nannini came under tremendous pressure from Campos’ Alexander Peroni and MP Motorsport’s Richard Verschoor but had second in his grasp when safety car was deployed for a chain of incident starting with Hitech GP’s Dennis Hauger.

He collected Carlin’s Leonardo Pulcini and to avoid Hitech GP’s Max Fewtrell and Trident’s Oli Caldwell got beached onto the gravel trap. While they retired, the duo who started the incident managed to continue after diving into the pits.

The re-start worked well for Piastri but Nannini came under pressure from Peroni, who eventually passed him at Turn 1 with Verschoor trying to push through as well. The Dutchman, though, had Prema’s Logan Sargeant on his tail.

As the gaps started to open up, a second safety car for Jenzer’s Federico Malvestiti off at Turn 5 brought them back together. Piastri still managed to hold the lead and eventually win the sprint F3 race as Peroni was second and Nannini securing his maiden podium.

The Italian managed to keep off a long chain of drivers with Verschoor and Sargeant being the closest. ART’s Theo Pourchaire defended well all-through to fend off Hitech GP’s Liam Lawson for sixth as HWA Racelab’s Enzo Fittipaldi did well in eighth.

The Italian made the most from out the Top 10 as Trident’s David Beckmann dropped to ninth with feature F3 race winner HWA Racelab’s Jake Hughes unable to make any progress in 10th from Carlin’s Clement Novalak.