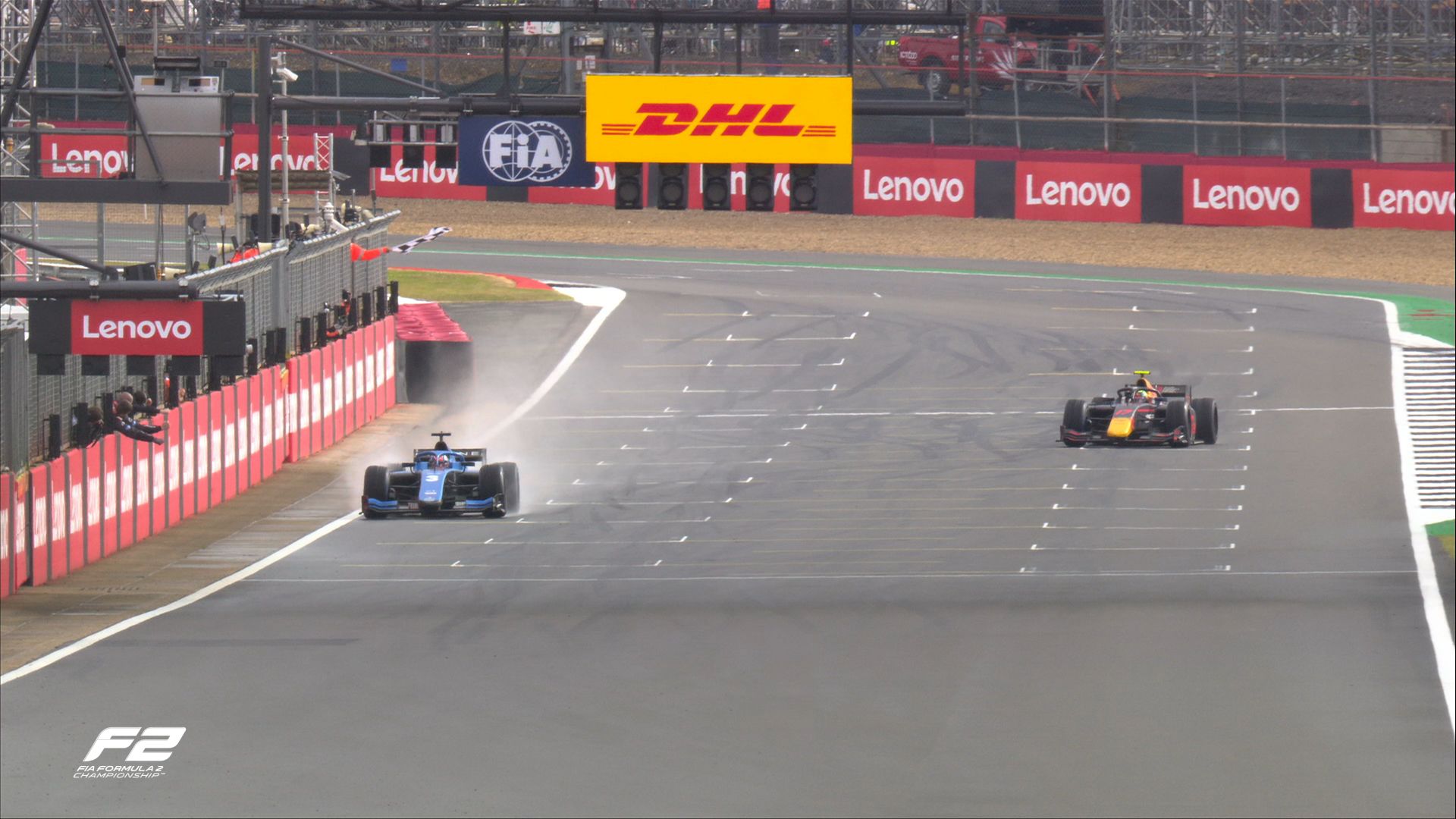 The wet situation forced the organisers to opt for a rolling start after two laps behind the safety car in the sprint F2 race at Silverstone. Reverse grid pole-sitter Jehan Daruvala led the way comfortably in his Prema from Charouz’s Enzo Fittipaldi.

The likes of Daruvala, Vips and Lawson were the ones to face issues with over-heating. All three started to lose places, with the Indian dropping from first to fifth midway in the race where Fittipaldi was the first to clear him for the lead.

The Brazilian then lost the lead to Doohan who cleared Vips and Daruvala early on. Even Iwasa was the one to be on the charge where he brough himself up to second after clearing Vips, Fittipaldi and Daruvala in the process.

Fittipaldi held on to third from Pourchaire who had quite the fight against his teammate Vesti and Lawson. The Kiwi damaged his front wing and was forced to pit in the process to drop to last, with Pourchaire moving up to fourth after clearing Daruvala.

The Indian steadied himself in the Top 5, with Vesti up to sixth from Drugovich. Carlin’s Logan Sargeant made his way up to eighth for the last point with Vips dropping out of the points in ninth from Prema’s Dennis Hauger in the Top 10.

While Doohan led Iwasa at the front, Fittipaldi held off Pourchaire for third. Behind them, Drugovich was on the charge after clearing both Vesti and Daruvala in couple of laps to move up to fifth. The Danish driver then closed in on the Indian driver.

It was a bit of hard work for Vesti but he eventually made it through Daruvala for sixth as the Indian then lost out to Sargeant as well to drop to eighth from pole. At the front, Doohan got the sprint F2 race win but it got dicey with Iwasa right on his tail.

There was not any laps left to end up second with Fittipaldi long way off in third from Pourchaire. Drugovich salvaged a good fifth from Vesti, Sargeant and Daruvala in the Top 8 points position, with Marcus Armstrong and Richard Verschoor in the Top 10.

Holding his nerve until the dying minutes of the race, Isack Hadjar swooped in to take victory out of Victor Martins’ hands. A breath-taking lunge around the ART Grand Prix driver on the penultimate lap was enough to secure a second Formula 3 win in his rookie season at Hitech Grand Prix’s home race.

Martins was forced to settle for second after sustaining pressure from rookie Reece Ushijima in the final few laps. A sterling effort from the Van Amersfoort Racing driver, who started on reverse grid pole, paid off to seal his maiden F3 podium in third.

12th-placed qualifier Reece Ushijima had a little bit longer to wait to get off the line in his highest-ever starting position. The reverse grid pole sitter led the field for a second formation lap after an issue for a slowing Brad Benavides led to an aborted start.

Determined to make amends after a disappointing Friday, Martins wasted no time diving up the inside of Ushijima to snatch the lead of the race and the VAR racer found himself under pressure from Maini, going side-by-side in the opening sectors.

Clean getaways throughout the field meant the drivers were eager to do battle, as Frederick and Bearman fought over sixth. The American driver soon caught up with Maini and Hadjar ahead, and the two Hitechs tucked into the MP Motorsport driver’s slipstream. Meanwhile, Bearman fell into Maloney’s clutches. The two made contact but both got away unscathed, as the British driver lost out to teammate Crawford and Leclerc created a PREMA queue at the backend of the points.

Out front, Martins was unable to build a gap as Ushijima refused to let the Frenchman out of his sights, closing to within four-tenths. With the added benefit of DRS, the American-born driver – who races under a British licence – sent a move around the outside. Martins tried to break the tow, but Ushijima got his elbows out, going side-by-side around the outside before the VAR driver took a trip over the kerbs.

Hadjar was on a charge, swiftly dispatching Maini for P3 and begun to hunt down the leading pair. On Lap 7, he was already within Ushijima’s DRS window. A mistake from the VAR driver at Luffield opened the door for Hadjar. The pair went toe-to-toe into Maggotts and Becketts and despite the VAR’s valiant defence, Hadjar carved his way past before closing in on race leader Martins.

A Safety Car on Lap 10 shook up the field, after Charouz Racing System’s Zdenek Chovanec and László Tóth collided. Two laps later, the Safety Car pulled into the pits and race leader Martins wasn’t waiting around, flooring it into the final corner to try to pull away from Hadjar behind.

In the fight for the final podium spot, fourth-placed Maini was caught off guard on the restart and dropped 1.7 seconds behind Ushijima. This allowed the black and orange VAR to creep up on the duelling pair in front, as Martins went wide and Hadjar forced him to go on the defensive.

A three-way fight for the lead on the penultimate lap left Martins’ trying to put his car in all the right places, but there was nothing he could do as Hadjar swooped around the outside at Stowe. The ART driver’s eyes were quickly glued to his mirrors as Ushijima was all over his rear wing right up until the finish line.

However, it was Hadjar who reached the chequered flag first to take his second Sprint Race win of the season. Martins held on to third ahead of Ushijima and Maini. Frederick’s quiet race was rewarded with fifth, ahead of Stanek and Maloney. A last burst of action in the final few laps saw Leclerc get the better of Bearman and Crawford to finish eighth, as his American teammate rounded out the top 10 points-scorers.