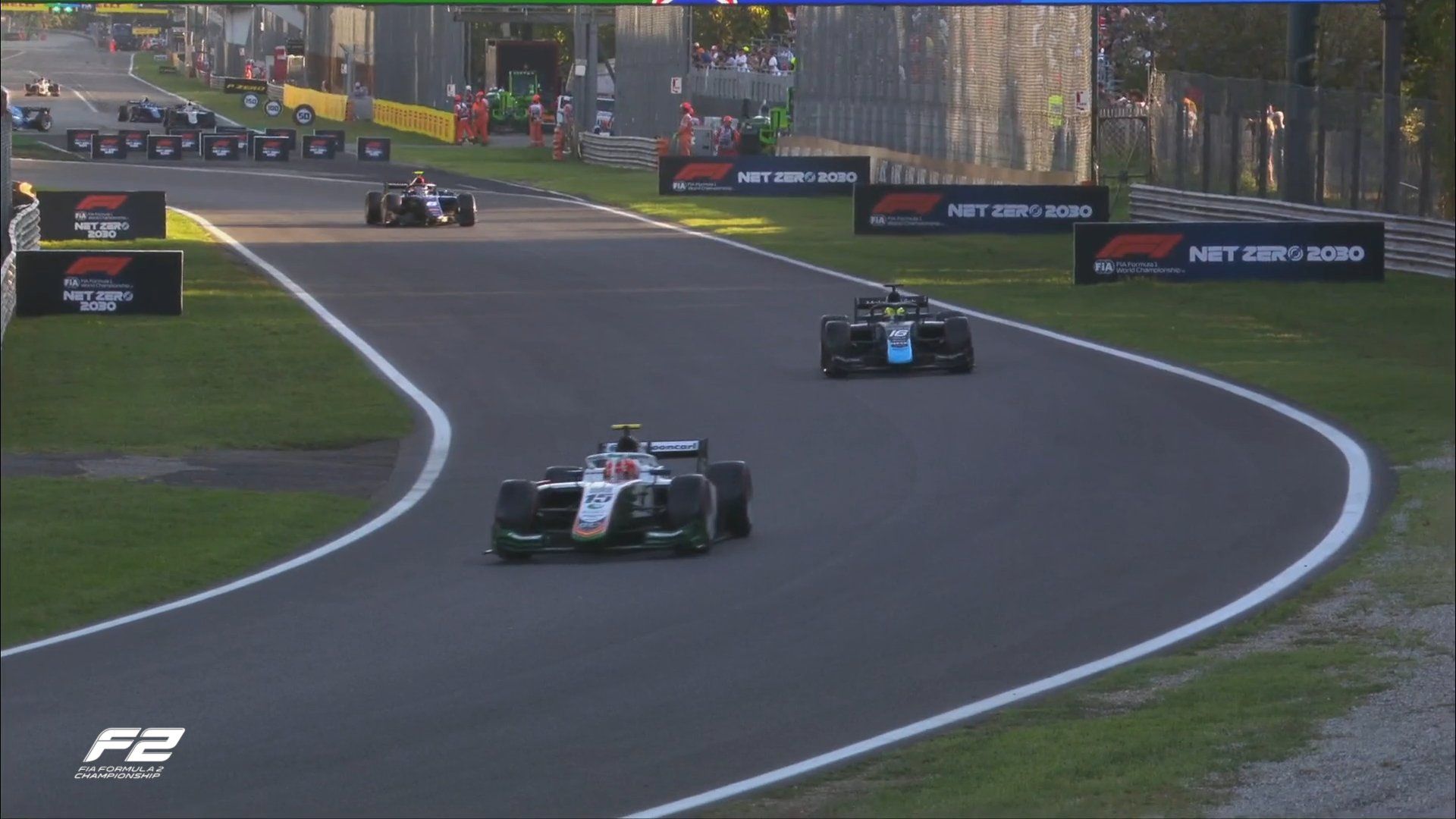 Jack Doohan took feature F2 race pole at Monza after late crash for Ayumu Iwasa, as Aleksandr Smolyar had it in F3.

It was a hectic start to feature F2 race qualifying at Monza as Virtuosi Racing’s Jack Doohan took provisional pole after setting a late 1m31.965s lap despite an early run-in against Prema’s Jehan Daruvala, who was ninth in the order then.

Hitech GP’s Juri Vips slotted in second from Carlin’s Logan Sargeant with F2 points leader Felipe Drugovich in fourth in his MP Motorsport car, while ART’s Theo Pourchaire rounded out the Top 5 ahead of the second and the final run.

It was flurry of quick laps for drivers when they came around for their penultimate quick lap as Doohan stepped on the gas again to lead from Lawson and Hitech GP’s Marcus Armstrong with Drugovich and Daruvala in the Top 5.

It looked like a close fight but ended in disaster after DAMS’ Ayumu Iwasa crashed out on his final lap after losing the rear at the Parabolica. His car hit the barrier and caught fire for a moment with the session coming to an end.

Doohan kept feature F2 pole at Monza from Lawson with Armstrong slotting in third as Drugovich was fourth from Trident’s Richard Verschoor who improved around the incident to be fifth from Daruvala as Iwasa ended up seventh in the end.

Vips was eighth from Sargeant as ART’s Frederik Vesti rounded out the Top 10, who has sprint F2 race pole at Monza alongside Sargeant on Saturday.

UPDATE: Championship leader Felipe Drugovich has been handed a five-place grid penalty for tomorrow’s Sprint Race at Monza. The MP Motorsport driver, who could claim the Formula 2 title this weekend, was found to have set his fastest lap of the session under single yellow flag conditions at Turn 11.

In the final stages of Friday’s Qualifying session, DAMS’ Ayumu Iwasa lost control of his car at Parabolica and crashed, bringing out the yellow flags. It was found that during the single yellow flag conditions at Turn 11, Drugovich had set his fastest time in mini sector 16, which is not in compliance with the Race Director’s Event Notes. Therefore, the MP Motorsport driver has been assigned a grid penalty and, having been set to start the Sprint Race from P7, will now line up 12th on the grid.

At the same time, the likes of Verschoor, Sargeant and Vesti were cleared of the same offence.

#F2 #ItalianGP Provisional qualifying results as Iwasa crashes out and others improve under yellow. Iwasa is okay. The top 10 will be reversed as the starting grid for tomorrows Sprint Race. #MsportXtra @F2Inside pic.twitter.com/5jCsRIBC9Q

Alexander Smolyar claimed pole position for MP Motorsport after a Qualifying session interrupted by a significant Red Flag. Isack Hadjar crashed out of Qualifying midway through the session, ending up 16th in the order.

With the long straights of Monza comprising most of the lap, drivers were immediately searching for a tow on their outlaps. Martins was in a great position with his two teammates ahead of him on the road but ran deep on his first attempt at Turn 1, taking to the escape road and forcing him to reset for another go.

The title contenders took two of the three top three spots following the first laps, Stanek first ahead of Isack Hadjar in P2. Arthur Leclerc filtered through in seventh after a huge snap of oversteer out of the second Lesmo.

With 10 minutes gone, Stanek lowered the benchmark time to a 1:38.107 ahead of teammates Jonny Edgar and Maloney in a Trident 1-2-3. Leclerc managed traffic in the third sector well enough to go ahead of Hadjar and Bearman, fourth, fifth and sixth respectively. Martins’ first lap left him 10th in the order with Crawford following in 11th.

As the third laps filtered through, Hadjar looked set to take the fastest lap with two good sectors. Through Parabolica, he ran wide, picked up the gravel and spun into the barriers. His crash brought out the Red Flags with 15 minutes left of the session.

With half of the session remaining, Qualifying got back underway though there was no real rush to venture out for a lap. Nobody wanted to blink first with the tow so crucial to a fast lap, but it was time to go with eight minutes left of the session. Ciao Collet led the train out of the pit lane for MP Motorsport.

Preparation laps until three minutes to go left the pressure laps right to the very end. Smolyar set a fastest first sector, Martins was quickest in sector two, but it was the MP driver that managed the better lap, setting a 1:37.559 to take pole.

Maloney kept up his impressive Qualifying form to go second with teammate Stanek third. Martins’ time was good enough for fourth ahead of Leclerc and Bearman, fifth and sixth for PREMA. William Alatalo popped up to seventh on his last attempt, ahead of eighth-placed Crawford. Juan Manuel Correa and Edgar completed the top 10. Josep Maria Marti is set to start the Sprint Race on the front row with Collet on reverse grid pole.

#F3 #ItalianGP Provisional qualifying results as a number of drivers need to visit the stewards. Benavides confirmed with a 3 place grid drop. The top 12 gets reversed as startinggrid for tomorrows Sprint Race. #MsportXtra pic.twitter.com/1vuptoSfYm