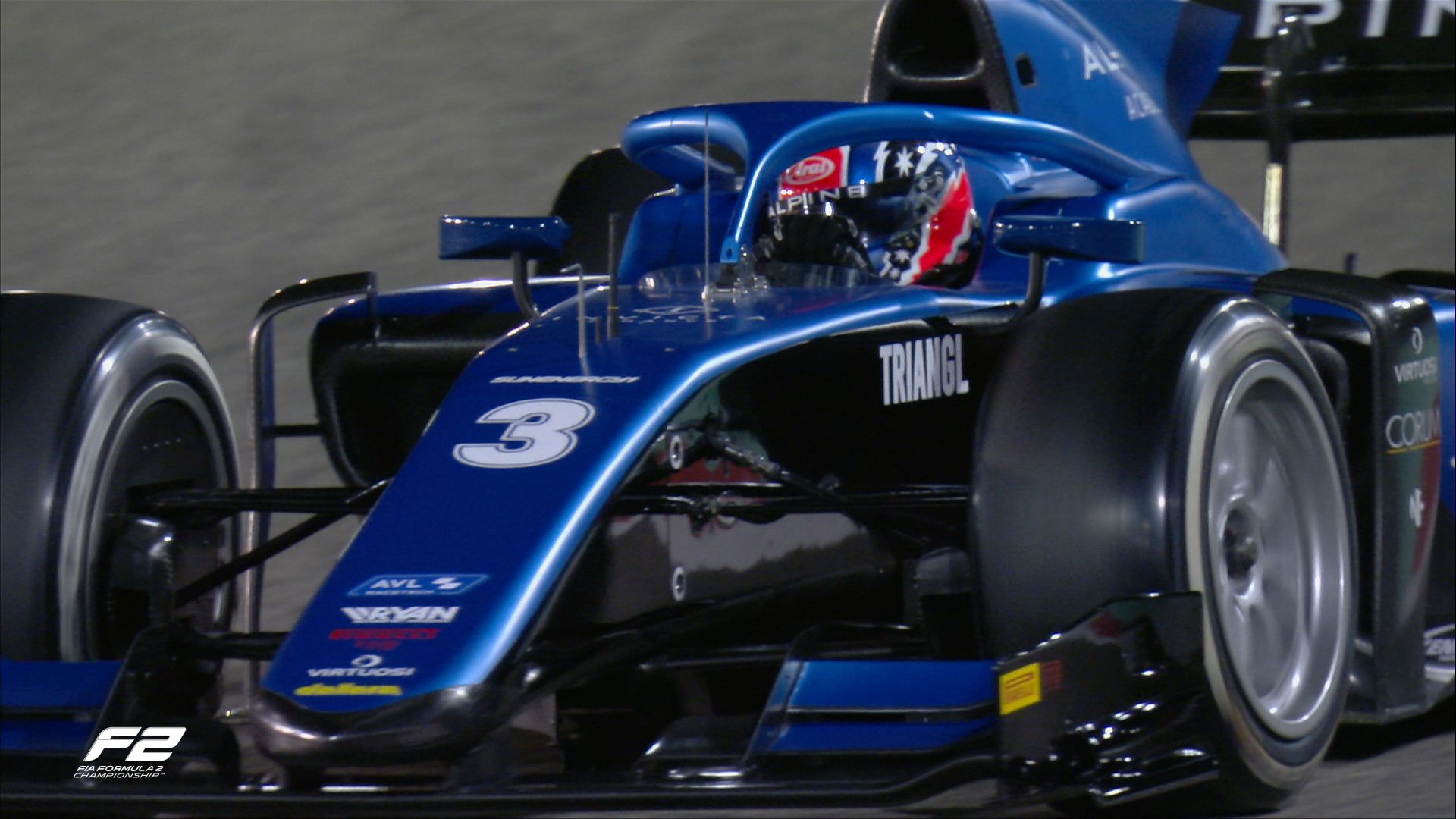 Jack Doohan took pole position for the first feature race of the 2022 F2 season at the Sakhir circuit, with Franco Colapinto doing so in F3.

The interrupted F2 qualifying session in Bahrain was red flagged less than a minute after the green light was illuminated at the end of the pit lane, after DAMS’s rookie recruit Ayamu Iwasa spun on cold tyres at Turn 3 straight out of the pits.

Debutants Van Amersfoort Racing took provisional pole by virtue of Jake Hughes for the majority of the session until MP Motorsport’s Felipe Drugovich stole the mark from the British driver. But Hughes wasn’t far behind and took back P1 with a 1m41.121s with over 19 minutes to go.

In the middle of the session, Doohan laid down a storming marker with a mighty 1m40.542s to take the provisional P1 spot by over half a second for Virtuosi Racing. The Australian’s time wouldn’t be beaten for the rest of the session, and the Alpine claimed his first pole in F2.

ART Grand Prix’s Theo Pourchaire was over a tenth away in second in his second attempt after his lap time deleted the first time. with Hitech GP’s Juri Vips rounding out the top three. The Estonian almost had a collision with Prema’s Dennis Hauger when the Norwegian tried to enter the pits which caught out Vips.

The move is under investigation which could add to Hauger’s already difficult day. Majority leader Hughes ended the session in eighth, as the top driver for Van Amersfoort Racing, with Carlin’s Logan Sargeant, Campos’ Ralph Boschung, Carlin’s Liam Lawson and Prema’s Jehan Daruvala making up the P4-P7 spots ahead of him.

The Indian left it late to set a quick time and was sort of held up in the final corner. Trident’s Richard Verschoor and MP Motorsport’s Drugovich round out the top 10 over six tenths of a second adrift of the pole-sitter, with the Brazilian securing a Top 10 reverse pole for Saturday’s sprint race.

UPDATE: Following the investigation, the stewards reprimanded Hauger for coming in the way of Vips during the early part in qualifying. “The Stewards examined video evidence,” started the statement. “They summoned and heard the drivers and team representatives (document 18 & 19).

“Having considered the matter extensively, the Stewards determined that both Car 8 and Car 1 were on push laps with Car 1 planning all along to pit at the end of the lap, while Car 8 was continuing. Car 1 was not properly aware of Car 8’s position as both cars exited Turn 15. Car 1 dove for the pit entry, surprising Car 8 who was starting to pass on the inside. Car 8 was forced to lift to avoid contact and was thereby hindered.” 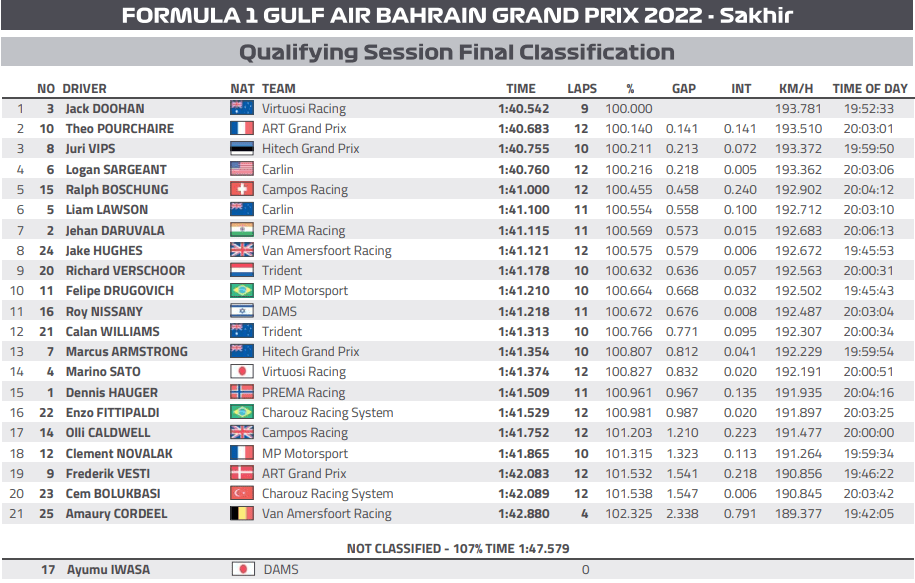 The F3 qualifying for 2022 season kicked off in chaos, as the bunched up field jostled for position before each starting their first flying lap in formation around the Sakhir circuit. A third of the way into the session, 20 of the 30 drivers had set representative laps, all within 1.5 seconds of the leading time of 1m46.978s from ART’s Gregoire Saucy.

Alexander Smolyar put his MP Motorsport car on provisional pole with 12 minutes to go, by over 3 tenths of a second. But later on had his last flying lap horrifically compromised by a train of upwards of six cars queuing on the racing line before the right-hander leading back onto the pit straight.

However, it was the debut Van Amersfoort Racing team’s 18-year-old rookie Franco Colapinto who clinched pole position by six and a half hundredths of a second with a 1m46.249s, ahead of Trident’s Roman Stanek. MP Motorsport’s Kush Maini took 3rd, less than a hundredth behind Stanek, although the Indian driver missed a weighbridge call and could be disqualified from the session.

The Top 10 saw Campos’ David Vidales in 10th ahead of highly rated Ferrari junior and F3 rookie Oliver Bearman, who secured a front-row start for Saturday’s sprint race alongside pole-sitter Zak O’Sullivan in the Carlin.

UPDATE: The stewards handed three-place grid drop to Simmons for impeding Smolyar but they noted that it wasn’t the intention of the Brit to do so, which is why the penalty stood at three places and not more.

In a larger penalty, Maini lost his third place and will have to start both the sprint and feature races from the pitlane. Not only did the Indian miss the weighbridge call, but his team started working on the car too which further complicated the issue.

“Having considered the matter extensively, the Stewards determined that Car 12 did not stop at the weighbridge when properly ordered to do so by the Technical Delegate,” stated the report. “The Team subsequently began work on the Car. The mandatory penalty in such cases is specified in Art.29.1(b) iii of the 2022 FIA F3 Championship Sporting Regulations and applies to both races whose grid is established by this session.” 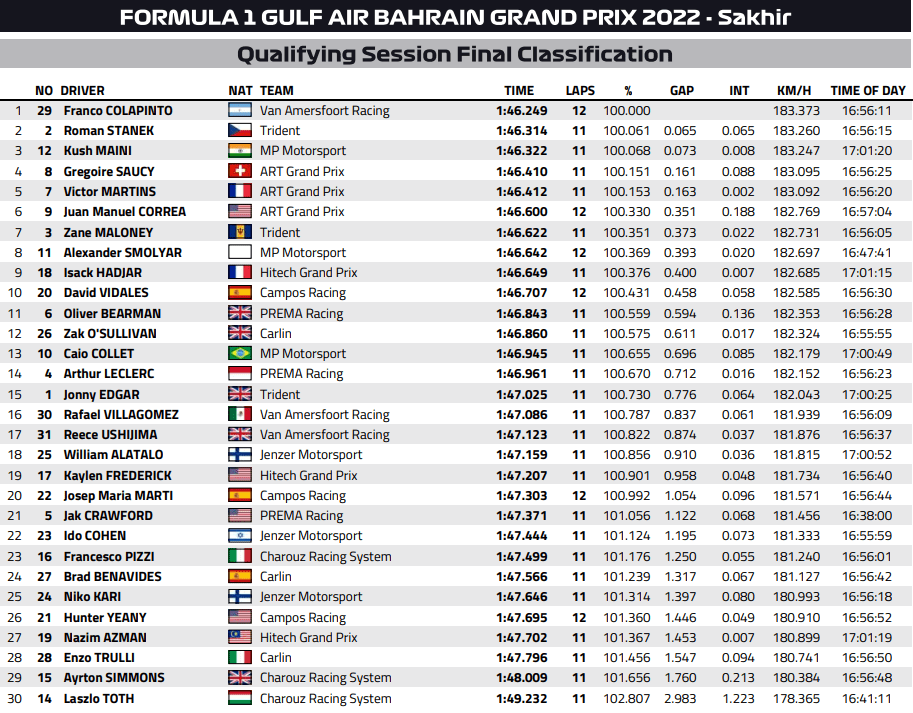