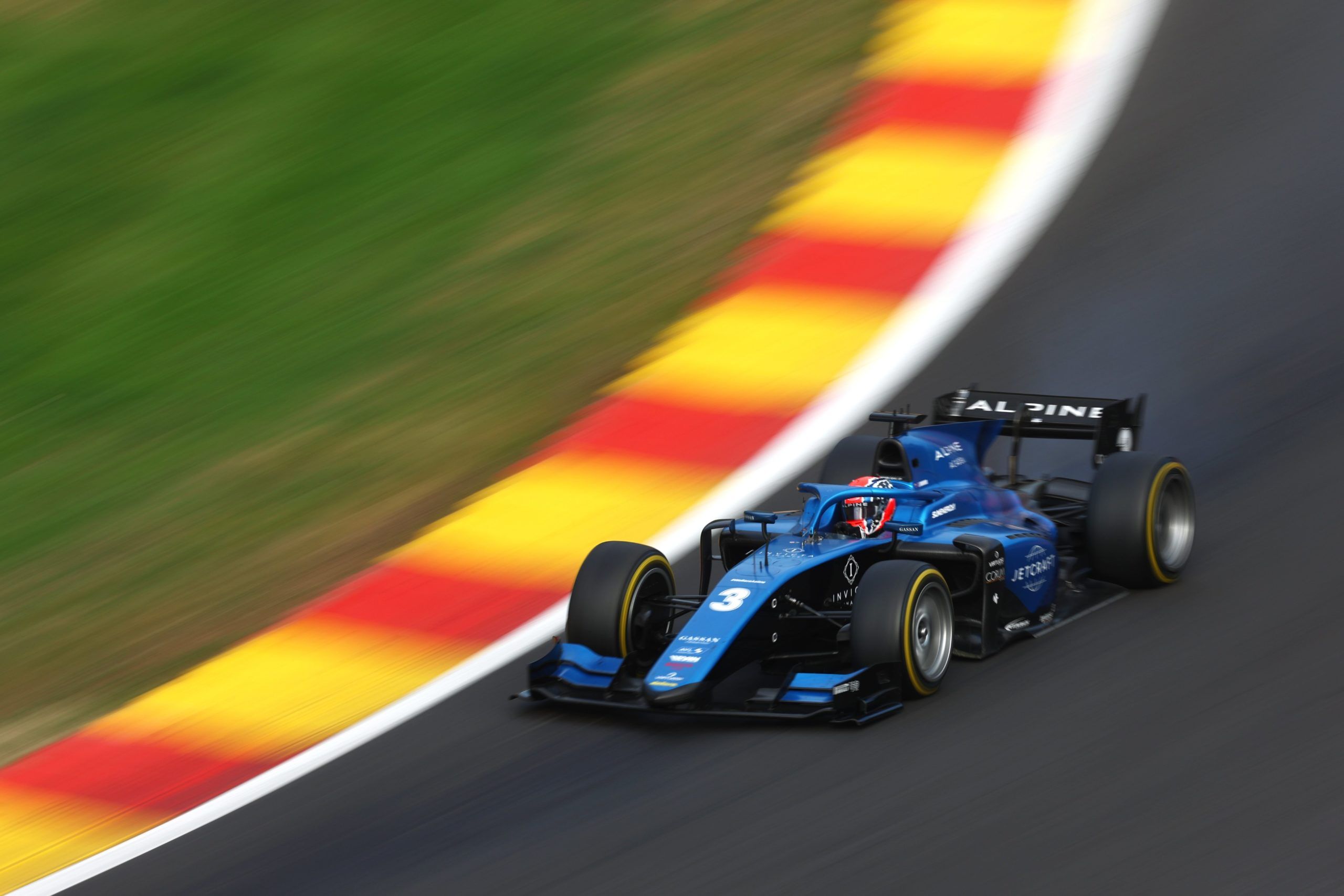 It was clear weather to start the feature F2 race at Spa-Francorchamps and pole-sitter Felipe Drugovich made a clean start to lead in his MP Motorsport car, with Virtuosi Racing’s Jack Doohan slotting in second from VAR’s David Beckmann.

While Drugovich led the way comfortably, Pourchaire had a heartbreak with a retirement due to a mechanical issue as Prema’s Jehan Daruvala was forced to pit due to front wing damage after a tangle with DAMS’ Roy Nissany in the final corner.

The Israeli tried a move on the inside but with no space, the two touched. At the front, Fittipaldi and Lawson were in the fight for fourth with Verschoor right behind them. The Kiwi managed to hold onto the position after clearly from the Brazilian early on.

The pit stop melee kicked-off and Drugovich lost the lead to Doohan where the undercut worked for the Australian who took the F2 race lead but the Brazilian wasn’t too far off. Lawson was net third after another hefty battle with Fittipaldi.

Sargeant moved up the order to be fifth from Beckmann as Hauger was seventh from Armstrong with Verschoor losing the most in ninth and ART’s Frederik Vesti in 10th. The Dutchman, though, was on different strategy and had the tyres to move up the order.

And he didn’t disappoint as he quickly made up to fifth and passed Fittipaldi for fourth. Behind Beckmann passed Sargeant for sixth but as went off the track when passing, he had to give the place back while defending from Hauger.

The Norwegian, though, came under quick pressure from DAMS’ Ayumu Iwasa on the soft tyre strategy. The Japanese driver caught up and passed Hauger for eighth as Hitech GP’s Juri Vips passed his teammate Armstrong to get himself in the Top 10.

With Doohan in the lead, the race was neutralised a bit with Virtual Safety Car after Campos’ Lirim Zendeli stopped on track. But the Australian didn’t have any trouble to secure his first feature F2 race win from points leader Drugovich.

Lawson made it two podiums in the weekend in third, with Verschoor in fourth from Fittipaldi, Sargeant, Beckmann, Iwasa, Vips and Hauger in the Top 10. But a penalty for the Norwegian dropped him out of points, with MP Motorsport’s Clement Novalak in 10th.

Having become the seventh different driver to take pole this season, Collet lined up on the front row alongside Maloney whilst four of the top five in the Championship standings found themselves sitting P20 or lower.

The whole field got away cleanly and immediately Maloney tried to come out on top in a drag race down the Kemmel Straight. Both drivers were hungry for the lead as the Trident tried to dive down the outside of Collet at Les Combes, tapping wheels the Bajan driver took a trip over the kerbs and rejoined from the runoff in the lead. Their duel left third-placed Pizzi with nowhere to go and the Charouz Racing System driver took avoiding action through the gravel, dropping down the order.

Maloney’s time out front didn’t last for long, as he was ordered to give the place back by his team. In the meantime, Goethe had gotten past Collet for P2, forcing the Trident to drop down to third behind the MP in order to return the position.

Disaster soon struck for title contender Martins. The ART Grand Prix driver found himself collected in chaos ahead as Kush Maini overshot the corner sending him into the side of Pizzi, tagging Ido Cohen and Martins. The contact forced the Frenchman to pull over into retirement at Radillion, bringing out the first Safety Car appearance of the day.

As a result, in only his second F3 weekend, it was up to Goethe to get racing back underway on Lap 5. Going early on the restart and getting out of shape into the final chicane gifted Collet the chance to fly past the Campos Racing car into the lead and left the door open for Maloney and Stanek to find their own ways through.

No sooner than the action resumed did the Safety Car return to the track after Grégoire Saucy and Josep María Martí touched wheels, resulting in the early retirement of a second ART car. This left the job up to leader Collet when the green flags were waved on Lap 10. Opting to go early on the restart couldn’t stop Maloney from pulling himself through into the front of the field around the outside of Les Combes.

Having been handed a five second penalty for rejoining the track unsafely, Collet knew it was time to be strategic as he battled with Stanek for second. Whilst the Czech driver backed out of his first attempt at a move, it wasn’t long before he found his way through on the Brazilian, who decided not to put up too much of a fight.

Just behind the leading trio, there was a three-car battle unfolding for the final spot on the podium as Bearman eventually found his way through on Edgar and set out to close the gap to Goethe for provisional third. He wasn’t the only one making moves, as Vidales’ confidence behind the wheel of his Campos car shone through, going aggressive on the brakes to dive past Smolyar for eighth.

As the penultimate lap began, it was Bearman’s time to strike as Goethe went too deep into Turn 1. The pair flew up side-by-side into Eau Rouge, but the Prema Racing driver cautiously decided to back out and go again one lap later. With the advantage of DRS this time around, the Ferrari Academy junior sailed past Goethe to claim his second podium of the weekend.

However, it was all about Maloney, who took the chequered flag over a second clear of his teammate Stanek and a whopping 5.6s ahead of the third-placed Brit – much to the delight of the whole Trident team, who had worked to rebuild his car following the previous day’s incident. Despite his best efforts to carve his way through the field, Arthur Leclerc missed out on points in P11, ahead of fellow title contenders Isack Hadjar in P14 and Jak Crawford in P20.