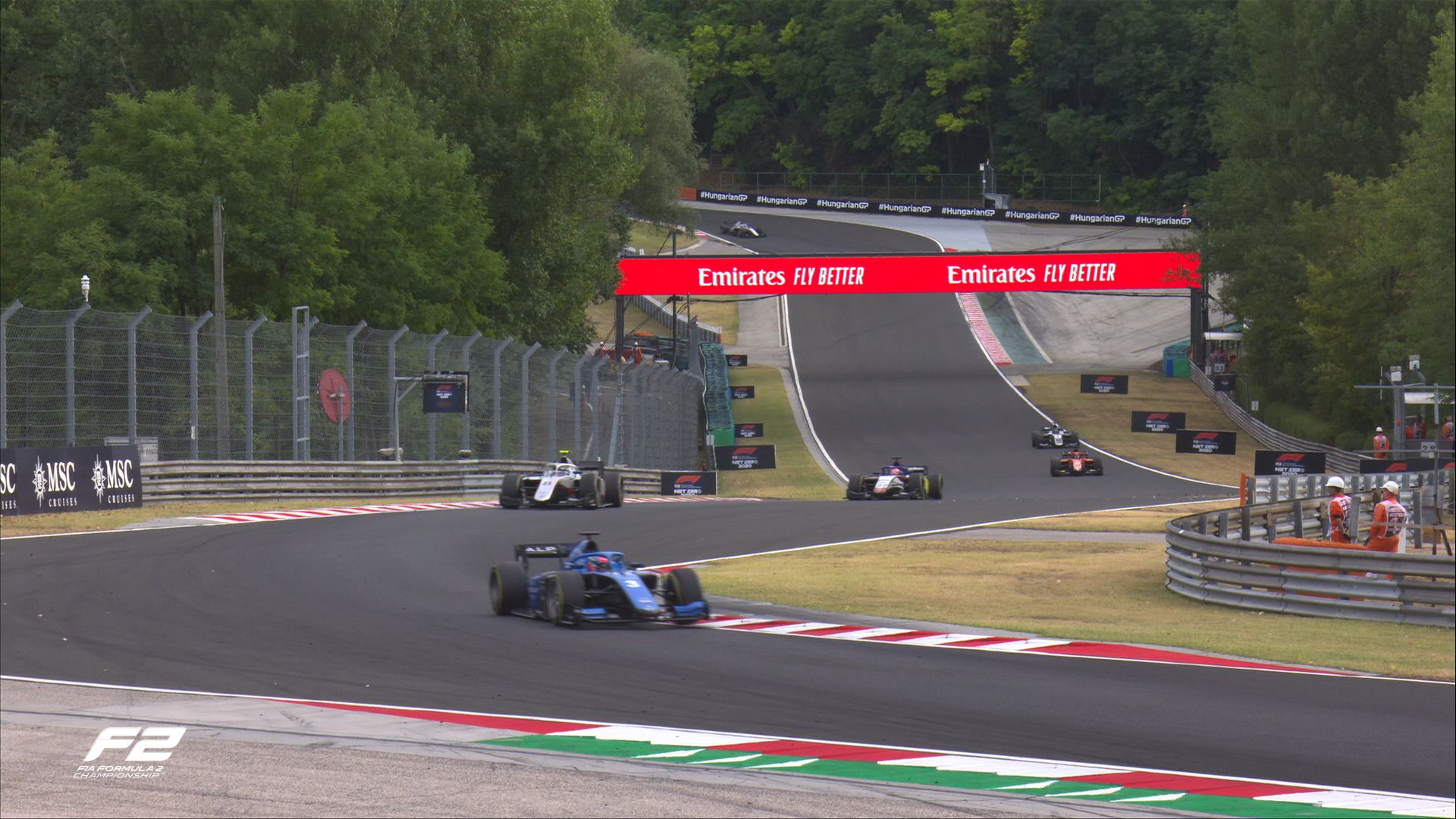 The weather remained dry for the sprint F2 race at Hungaroring as reverse grid pole-sitter Jack Doohan lost the lead in his Virtuosi Racing car where Charouz’s Enzo Fittipaldi taking over from the Australian at the start of the race.

But he locked-up going into the left-hander curve which allowed Doohan back in the lead, with Hitech GP’s Juri Vips sneaking into second as Fittipaldi dropped to third. A wide moment for ART’s Frederik Vesti allowed MP Motorsport’s Felipe Drugovich to fourth.

Prema’s Jehan Daruvala made up six places to be sixth with DAMS’ Ayumu Iwasa following him in seventh while Hitech GP’s Marcus Armstrong rounded out the Top 8 points position. The Japanese driver though dropped to ninth with the Kiwi moving to seventh.

Carlin’s Liam Lawson took eighth with the safety car deployed after the Turn 1 incident between Prema’s Dennis Hauger and Carlin’s Logan Sargeant. The Norwegian spun out, while the American limped back into the pits to retire.

The re-start worked well for Doohan to lead from Vips and Fittipaldi, but the Brazilian along with Drugovich hustled him for second. Vesti was a bit behind in fifth with Daruvala defending sixth from Armstrong and Lawson, who seemed a bit quicker.

At the back, there was a contact for MP Motorsport’s Clement Novalak and DAMS’ Roy Nissany, with both needing to pit. The Frenchman was adjudged as the guilty party as he handed a stop and go penalty for the incident.

While the leaders settled down, Vesti started to push Drugovich for fourth but the battle for sixth got interesting after Armstrong pressured a struggling Daruvala. The Kiwi tried to go around the outside at Turn 1 and switch over as the Indian locked-up.

It brought Lawson into the game, but Daruvala managed to hang on. The fight continued onto the next lap where Armstrong tried to go around the outside at Turn 1, but there was small contact which pushed the Kiwi onto the run-off.

The incident was noted with Daruvala hanging on but now with Lawson behind him. Armstrong held to eighth after fending off Iwasa, who tried to pass him. The contact between the Indian and Kiwi was put under investigation by the stewards.

He was handed a 10s time penalty for the contact which ended his chance of scoring points. Lawson eventually made it through him at Turn 1 and as it started to look bad, Daruvala backed out to allow Armstrong and Iwasa through.

He eventually pitted with Lawson in sixth from Armstrong and Iwasa in points. ART’s Theo Pourchaire who lost places at start to avoid Hauger was up to ninth. At the front, Doohan had a comfortable sprint F2 race win at Hungaroring after starting from pole.

Vips resisted pressure from Fittipladi to take second, who had Drugovich on his tail in the closing stages. Vesti was fifth from Lawson, Armsrtong and Iwasa in the points, with the Kiwi fending off the Japanese driver despite the late charge.

Pourchaire had to settle for ninth with Campos’ Olli Caldwell rounding the Top 10, where the Brit was under investigation for causing a collision along with Daruvala.

Heavily predicted going into the Budapest weekend, the downpours finally began in the lead up to the race. If leading the pack on debut wasn’t enough of a challenge, Goethe faced a rolling start around a soaked Hungaroring. Bunching up the field, the white, black and orange Campos car couldn’t quite keep his car on the racing line and went wide into the final corner.

Not one to let an opportunity pass by, Goethe’s mistake allowed Colapinto to sit on his rear wing, slipstreaming along the pit straight and diving up the inside of the Monégasque driver. Experience paid dividends as Hadjar and Collet also swooped their way past him and up into second and third, as Crawford got the better of Martins up the inside of Turn 5 to move up into fifth.

No sooner had the racing started than it would swiftly ground to a halt, as David Vidales found the barriers between Turns 2 and 3 and the Safety Car was deployed at the end of the opening lap. Colapinto caught Hadjar napping on the restart, dropping the Hitech Grand Prix back into Collet’s clutches and the MP Motorsport driver wasted no time in diving around the outside of the silver car at Turn 1.

While Colapinto had the advantage of being out front, the pace appeared to be with the MP Motorsport car behind. Corner after corner, Collet tried to squeeze his way past the VAR driver, running out of grip into Turn 13 and despite selling the Argentinian the dummy down the inside of Turn 2, Colapinto’s valiant defence held firm as Collet failed to find a way through.

Although the track temperature continued to rise and the rain began to ease off, conditions were still a challenge for the field to overcome. Brad Benavides locked his brakes into Turn 1, running into the side of Jenzer Motorsport’s Ido Cohen to necessitate the return of the Safety Car on Lap 5.

Learning from his mistake earlier on, Hadjar was immediately alert on the restart, attempting to charge his way around the outside of both Colapinto and Collet. While he couldn’t move up into the lead, he did manage to repay the favour on the MP driver, recreating his overtake into Turn 1 to snatch second momentarily. The pair continued to swap and change positions when Colapinto closed the door on Hadjar, enabling Collet to swoop into second from under him.

In the fight for fourth, Maini was a man on a mission in the second MP Motorsport car, diving down the inside of Martins and then setting about putting Hadjar under pressure, while the leading duo began to pull away from the pack.

Martins’ morning got increasingly challenging and wet conditions led the Frenchman to make a run of errors. Going wide into the final corner left him vulnerable to the PREMAs behind, as Crawford squeezed past him along the main straight and forced him to go side-by-side with title rival Leclerc. Another wide moment on to the slippery run-off area proved costly as the Ferrari Driver Academy member sailed past him and up into fifth.

Out front, Colapinto continued to prove impossible for Collet to pass. However, a small mistake at Turn 2 gave the Alpine Academy junior the moment he had been waiting for to snatch the race lead on Lap 10. Now with a clear track up front, Collet put his foot to the floor and didn’t look back, giving himself plenty of breathing room with the gap up to 2.7s after only a single lap.

As the spray faded and the tyres waned, the race turned into survival of the fittest as the field attempted to conserve their wet Pirelli compounds to the chequered flag with five laps remaining. Nobody seemed to be immune – Leclerc’s moment of oversteer saw him take a hefty whack over the red and white kerbs at Turn 4, while Hadjar’s overly wide line off on to the run-off at Turn 13 gave Maini a chance to pounce.

The Indian driver had no hesitation in breezing past him at Turn 4 and forcing Hadjar to go on the defensive from fellow Red Bull junior Crawford. It was clear that the Frenchman’s tyres had fallen off their cliff as he slowly started to slip down the order behind Crawford and Leclerc and straight into Martins’ eyeline.

With his heart set on a maiden Formula 3 podium Maini refused to give up the fight, going side-by-side with Crawford on the penultimate lap as the MP Motorsport driver attempted to break the tow. Thankfully for him, the move paid off and the American driver dropped back, ultimately getting caught out in late drama and coming together with his teammate Leclerc.

Although he was able to continue, the damage was already done, and Leclerc found himself unable to turn left into Turn 13, drifting into Martins’ path.

While all the chaos unfolded behind, Collet cruised to his first victory in the third tier ahead of Colapinto and Maini. Hadjar hung on to fourth, as his teammates’ troubles benefited Oliver Bearman, who claimed fifth. Despite the contact, Martins crossed the line in sixth ahead of ART teammate Grégoire Saucy and newcomer Goethe. Trident’s Roman Stanek and Zane Maloney held off Reece Ushijima to take the final points in ninth and 10th, respectively.