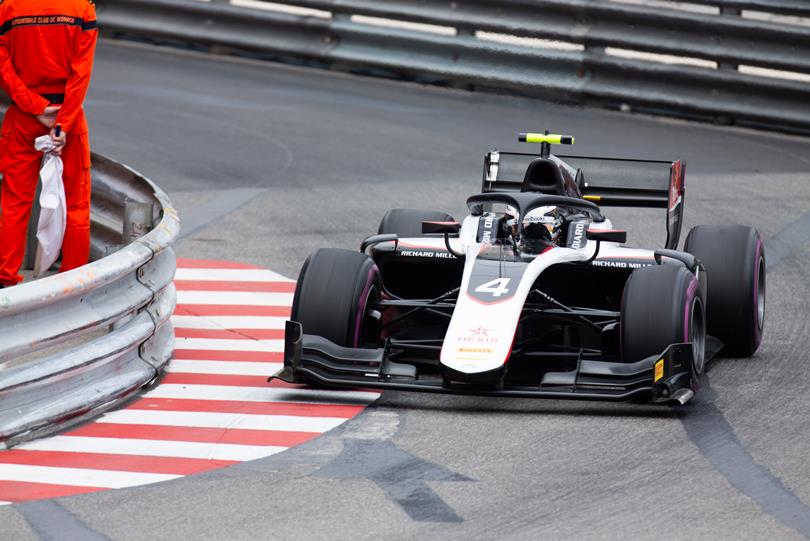 The start of the Monaco feature F2 race was aborted as the drivers went for an extra formation lap after front-row starter Sauber Junior Team by Charouz’s Callum Ilott stalled on the grid and had to be pushed into the pitlane unfortunately.

Despite the clean road ahead, Prema’s Mick Schumacher couldn’t capitalise as the German dropped behind on the actual start as pole-sitter ART Grand Prix’s Nyck de Vries led the way from UNI-Virtuosi Racing’s Luca Ghiotto and DAMS’ Sergio Sette Camara.

It was BWT Arden’s Anthoine Hubert who moved up to fourth ahead of Schumacher, who had Carlin’s Nobuharu Matsushita at his back with Prema’s Sean Gelael, DAMS’ Nicholas Latifi, Carlin’s Louis Deletraz and Campos Racing’s Dorian Boccolacci in the Top 10.

All three cut the chicane at Turn 1 as Ilott was forced to retire after running for four laps. While few drivers pitted early, Boccolacci had to fend off Markelov for fifth at one stage where a mistake on the approach to the tunnel allowed the Russian to get through.

At the same time, Aitken was chasing Mahveer Raghunathan after his stop but couldn’t get through with the Indian eventually pitting after cutting a chicane for which he was handed a 5s time penalty. Meanwhile, the fight for ninth was on between Latifi and Schumacher.

The two made collision which forced Latifi to stop for a wing change as the German then started to push Calderon with Deletraz behind. It eventually ended up in a contact after Schumacher tried to pass Calderon at Rascasse with an inside line.

But the German tapped the left-rear of the Colombian which sent her in a spin as the trio then blocked the circuit for the stewards to red flag the race. The break worked against the leaders as even though they could put a new set of tyres, they had to stop again.

The re-start went well for de Vries as he led from Ghiotto and Camara but Calderon pitted for her mandatory stop. Interestingly, all the cars from Schumacher and below were classified a lap down as the leaders completed a lap pre-red flag.

The German was then handed a 5s penalty for gaining an advantage while he was handed a drive-through penalty for causing a collision with Calderon. With the rules not clear, the leaders wasted a new set of tyres by changing it under red flag.

The field ran in the same order mostly until Markelov went straight on the escape road which dropped him to eighth – the last car on the lead lap. There was further contact at Rascasse with Latifi colliding with Gelael as the Indonesian damaged his front wing.

Latifi was handed a drive-through penalty as the incident allowed Hubert to pass both to move to 10th with Gelael retiring from the race. At the front though, the leaders started to pit with five laps remaining but de Vries maintained his lead from Ghiotto.

The closing stages of the race was filled with drama still as Raghunathan seemingly pushed Aitken into the wall while Sauber Junior Team by Charouz’s Juan Manuel Correa crashed out a little further up the road to cause a safety car deployment.

That didn’t deter de Vries though as the Dutchman took the Monaco feature race win to make it two F2 wins in a row as Ghiotto was second with Honda junior Matsushita snatching third from Camara on the final lap of the race.

Camara had to be content with fourth with Boccolacci in fifth ahead of UNI-Virtuosi Racing’s Guanyu Zhou with Markelov in seventh and Deletraz eighth to secure a reverse-grid F2 pole for Sunday’s sprint race despite finishing a lap down.

The Top 10 was then completed by Hubert and Boschung as ART Grand Prix’s Nikita Mazepin missed on a point by just the 0.1s gap. Trident’s Giuliano Alesi ended up 12th with Latifi classified 13th after the penalty ahead of Schumacher.