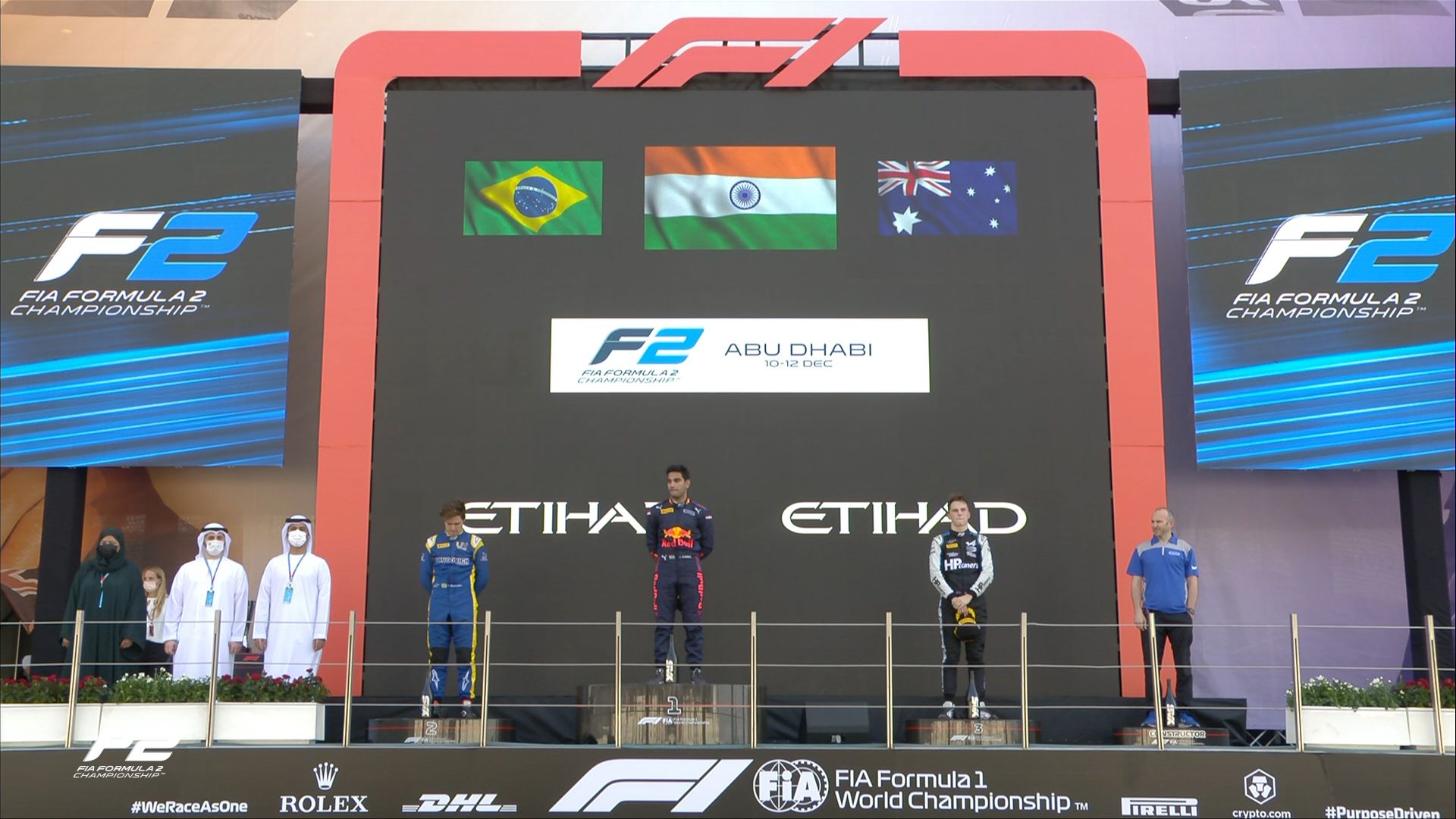 The reverse grid pole-sitter Jehan Daruvala started off well in Race 1 of Abu Dhabi weekend in his Carlin machine as he led the way from UNI-Virtuosi Racing’s Felipe Drugovich and Hitech GP’s Liam Lawson as Daniel Ticktum dropped back to fourth after slow start.

The Brit had a wide Turn 1 moment to Lawson as he then came under the clutches of fast-starters Premas of Robert Shwartzman and Oscar Piastri. The duo soon cleared the Kiwi to move up to third and fourth and create a gap behind.

Charouz’s Richard Verschoor was forced to retire as Campos’ Olli Caldwell and HWA Racelab’s Jake Hughes came together which resulted in the latter’s retirement and the former needing a front wing change to drop to the back of the field.

There was another incident between ART’s Christian Lundgaard and Trident’s Bent Viscaal where the Dane was spun around with the incident under investigation. At the front, Drugovich pressured Daruvala all-through to commit a mistake.

The Indian escaped one at Turn 12 but Drugovich did come close to passing him in the Turn 7-8-9 sequence with the Brazilian getting ahead at one point but Daruvala managing to get through ahead again by Turn 14. The Prema duo soon joined them in the fight.

It proved to be the last time that Drugovich pressured Daruvala as the Indian then edged away to create a good gap with a fastest lap. It was taken away from Caldwell towards the end but the Indian registered his second win of the F2 season in 2021.

Drugovich was second as he fended off a late charge from Piastri who passed Shwartzman in a late move to third. Even if he was fourth, the Australian was to be crowned as the 2021 F2 champion but finishing on the podium made the moment sweeter.

This was also the second time that Daruvala won a race when a F2 champion is crowned after 2020 saw Mick Schumacher do it. Shwartzman was fourth from Lawson with Ticktum in sixth ahead of ART’s Theo Pourchaire and UNI-Virtuosi Racing’s Guanyu Zhou.

The F1 bound driver took the final point but it was not enough to keep his F2 title hopes alive, as Campos’ Ralph Boschung and DAMS’ Marcus Armstrong rounded out the Top 10 where the Kiwi took a reverse grid pole for Race 1 later in the evening.

The Top 10 reserve grid in Race 2 of F2 weekend in Abu Dhabi saw Armstrong start well on pole from Boschung, Zhou, Ticktum and Shwartzman while behind him there was intense battle among 5-6 cars with Piastri and Lawson even having a moment in the left-hander.

Lawson had to take evasive action as Piastri was handed a time penalty. Daruvala made the most of this to be sixth from Durgovich as Lawson dropped to eighth from Pourchaire and Doohan after the Frenchman had a bad start to his race.

The fight also saw off moments for Doohan and Nissany as a safety car was deployed due to a collision between Deledda and Caldwell. The Brit tried a move on the inside in the left-hander but ended up colliding which ended the HWA driver’s race.

The racing got going after few laps but it wasn’t long that the safety car was deployed again when the fighting Piastri, Nissany and Vips had a collision. The Australian tried to use slipstream of both on the outside with the Estonian in the middle.

Vips and Piastri touched which ended their race as Nissany managed to escape through. The re-start was again short-lived as a mechanical issue for F2 race leader Armstrong left him on the side of the track with Zhou taking over the lead.

The VSC period allowed Shwartzman to make a quick work on Boschung and take second on re-start in his chase of Zhou. The Swiss racer fell into the clutches of Ticktum as his teammate Daruvala fended off Drugovich and late charger Lawson and Doohan.

An incident between Lundgaard and Nissany forced the Dane to pit with the clash noted by the stewards. At the front, Zhou maintained the gap to win Race 2 of F2 weekend as Shwartzman was second where the two are fighting for second place in the championship.

Boschung rounded out the podium after Ticktum lost pace which allowed Drugovich to close in on him and almost clear him on the line but for the Brit to hang on fourth. The Brazilian was able to clear Daruvala after multiple tries.

The Indian’s tyres were done as he lost to Lawson for sixth while Doohan in eighth rounded out the points places. Pourchaire was close to take that point away in ninth as Viscaal rounded out the Top 10 from fellow Dutchman Verschoor.