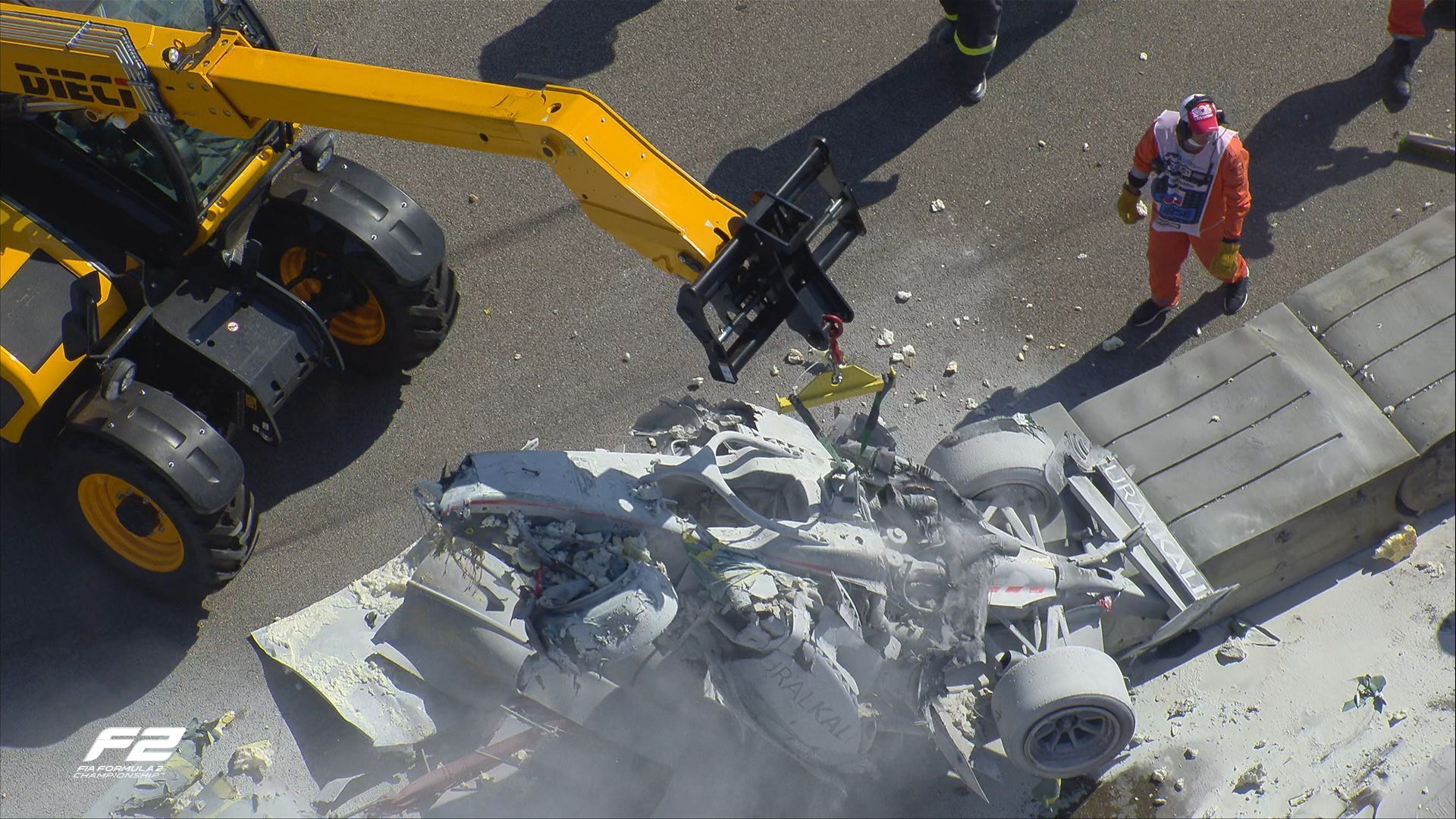 The sprint F2 race crash at Sochi was another new learning for the FIA as per Michael Masi with TechPro, fire and tyres, as Juan Manuel Correa shares fracture image.

It was a heavy incident in the sprint F2 race at Sochi involving Hitech GP’s Luca Ghiotto and Campos Racing’s Jack Aitken, where the duo going into the Turn 3 curve touched each other, which sent them straight into the TechPro barrier.

It was a high-speed incident where Aitken suffered a puncture to collide with Ghiotto. Both rammed into the barrier where the Italian’s car caught fire but both the drivers managed to leave the accident site unscathed. The race was red-flagged and it did not resume.

While Silvia Bellot is the F2 Race Director but Michael Masi was on-spot to carry out the checks considering they had to prepare for the F1 grand prix. It was again a new learning for the FIA, where they felt the car and the barrier did the job it had to.

The only minus was marshals reaching the spot late to douse the fire. Had Aitken and or especially Ghiotto got stuck in the car, the latter’s situation would have been worse after his car caught fire. Masi explained the reasoning while talking about the decisions taken.

“I think it’s unfortunate [that the race ended then],” said Masi to media including Racefans.net, Motorsport Network, BBC, AMuS and more. “At the end of the day, for starters we also have a timetable to adhere to. And secondly, you know the degree of that incident and the repair time that was needed to take place.

“I think what happened had to happen. It is unfortunate that the FIA Formula Two championship didn’t get to complete its race. But it does happen occasionally. I think you always learn different elements from different incidents. It is premature to list precisely what has been learned.

“But we’ve got all the camera angles, we’ll have a look at all of the footage. We’ll always learn something, small or large amount, but you always learn. Regarding the marshals, they got there actually, relatively quickly. The challenge was that there was quite a distance between the two marshal posts nearest from where the incident occurred.

“The fireman from both marshal posts were on the side of the incident. In all that, I wouldn’t want to be running for the best part of 150-odd metres or more, carrying  a fire extinguisher. As soon as the race was suspended, and all of the competition cars have gone past, we also saw marshals from the opposite side of the track cross to the incident point.

“Seeing a fire start is never good. But I think that under these circumstances, the positive part is that both drivers got out unscathed, which is the most important element of all,” summed up Masi, while adding that they will also look at the 18-inch tyres if punctures have become a problem with the change in the tyres.

“I haven’t had a look at the incident in detail to be quite honest,” said Masi. “Obviously the main focus is the safety of the drivers. This is prime. Subsequent to that was the repair of the affected area. But from an FIA perspective, we always look into elements like that. And we’ll come together with Pirelli and will do so accordingly after this weekend as we do as a routine following any serious incident.”

The F1 drivers had a close look at the incident too, where Renault’s Daniel Ricciardo echoed sentiments regarding TechPro barrier doing the job but had some reservations for marshals coming in late to douse the fire on the car. As for the 18-inch tyres, the Australian was cautious to comment but added that it will be good to see the data.

“The crash was obviously very big,” said Ricciardo to multiple media mentioned above. “TecPro barriers worked really good for that. I was quite amazed the cars got out so easily. This  was obviously what everyone wanted to see. I would definitely say the TecPro is very important on some of these high-speed corners.

“It does absorb a lot of the shock and gets the car to kind of slow down gradually by the look of it. I don’t want to be critical in such an accident, but the only thing I saw as that the  marshals were quite slow to put the fire out. Obviously, Ghiotto had got out of the car.

“I would like to think that they could have acted quicker if Ghiotto had been struggling to get out. I didn’t quite see about puncture but the accident’s happened and fortunately the drivers are okay. it’s now probably a good thing in hindsight that the officials of the race  can have a look if there are some issues with the wheels and how they’re structured.”

Having had a horrific crash last year at Spa-Francorchamps, Correa has so far shied away from sharing inner details of his injury apart from the known thing regarding his legs. He has had over 20 surgeries too in a bid to get back into racing.

It is unclear what type of cars he can drive or if can return but Correa is pushing to get back up by next year. In a Q&A session on Instagram, meanwhile, the American-Ecuadorian, for the first time, shared an image of an X-Ray taken just after the F2 crash, showing the horrific conditions of the legs.

#F2 Juan Manuel Correa did a Q&A session on Instagram and for the first time, showed the X-ray of the extend of damage to his legs. Quite shocking actually. #MsportXtra pic.twitter.com/CTdhUiMs7b

Here’s the last from Juan Manuel Correa about return