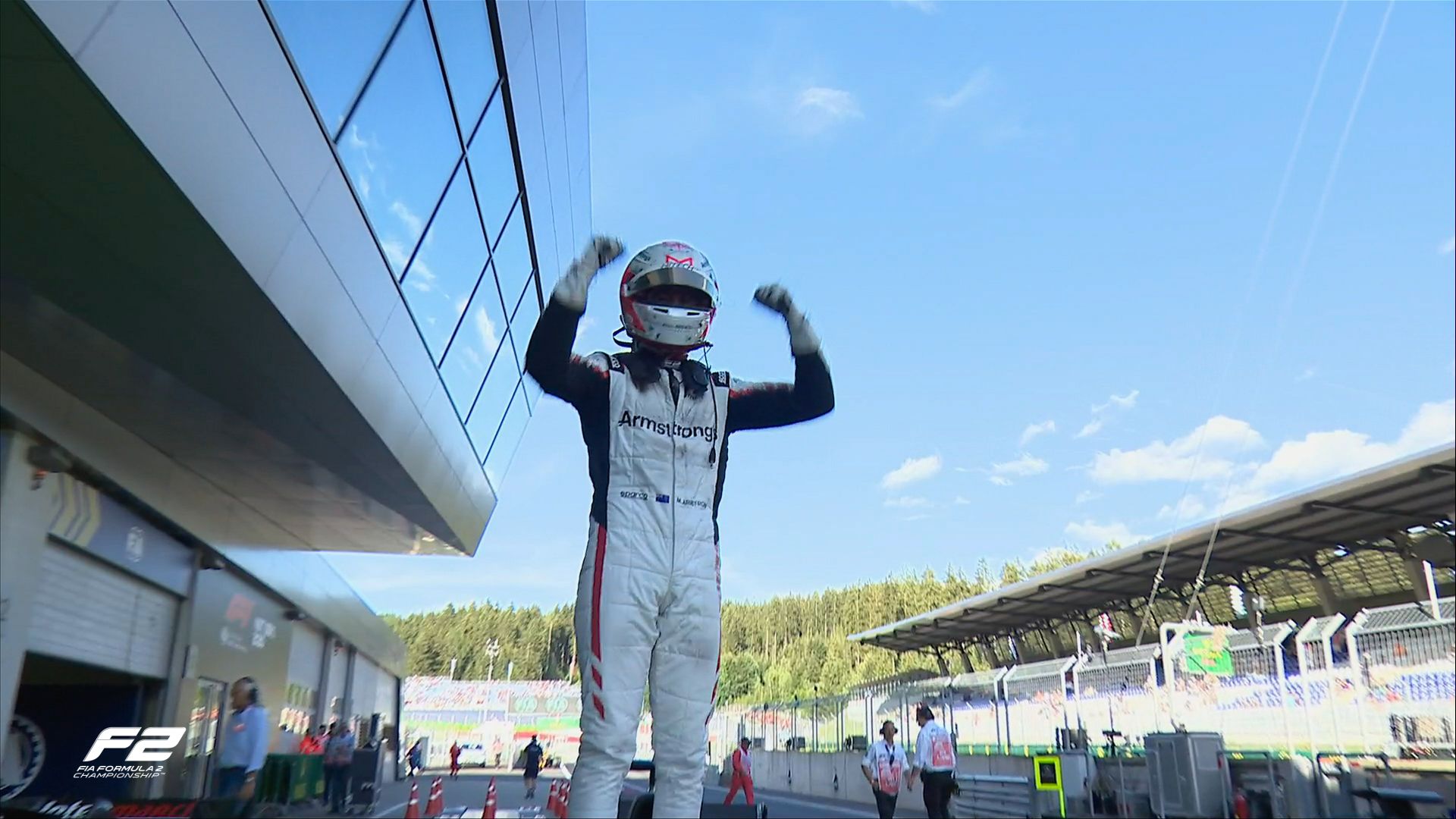 Lawson’s Carlin failed to get away from the grid for the formation lap, with the marshals quickly pushing the car into the pit lane. When the race got underway after the short warm-up lap, Hitech’s Armstrong got off the line nicely and stayed ahead of second-placed ART driver Theo Pourchaire.

The first corner was relatively clean in terms of contact, but several drivers took to the escape road and run-off area, including Prema’s Dennis Hauger at Turn 1. The second major pinch point being Turn 3 at the top of the hill saw championship leader Druogovich, for MP Motorsport, take a noticeably cautious approach as others, including DAMS’ Ayumu Iwasa, broke later and ran wide.

The top three of Armstrong, Pourchaire and Virtuosi’s Jack Doohan began to break away from the rest of the pack by the second sector, as those behind fought a plethora of different battles. Mercedes junior, and ART driver alongside Pourchaire, Frederik Vesti fought tooth and nail on the second lap with the Charouz of Enzo Fittipaldi. Marino Sato’s day unfortunately ended somewhat earlier than anticipated with the Virtuosi pulling into the pit lane and retiring on only lap three.

Drugovich pushed Doohan into a minor mistake at the last corner on lap six, but it was not enough in the end for the Brazilian to pass the Virtuosi. The battle for sixth was soon the place to watch as Iwasa gained on the Carlin of Logan Sargeant and Richard Verschoor in the Trident, but the one and only Virtual Safety Car was soon called as Lawson’s day went from bad to worse at Turn 3. The Red Bull liveried car stopping at Turn 3, although the New Zealander did get the car moving again at slow speed and returned to the pit lane.

The FIA began to issue a multitude of black and white track limits flags for drivers including the race leader Armstrong, Olli Caldwell, Amaury Cordeel and the Campos super-sub Roberto Merhi. It changed the game in effect for Armstrong, with any further infringements going towards a potentially race-changing penalty.

Pourchaire would have a track limits incident put under investigation for after the race, and the ART driver soon made a mistake which was enough to allow Doohan the chance for the DRS into Turn 4. A late double yellow flag in the first sector certainly helped Pourchaire’s case of staying ahead of Doohan to secure the P2 at the chequered flag.

It was Armstrong though who controlled the pace up front throughout and took the Sprint race victory with a commanding drive. Pourchaire took P2 on the track followed by Doohan, Drugovich, Vips, Verschoor, Sergeant, Iwasa, Vesti and Fittipaldi in P10. These results are provisional until all stewards’ investigations are concluded.

UPDATE: Pourchaire was let off with no penalty for track limits after it was found that he only did so thrice and not four times. “The Stewards examined video and timing evidence. Having considered the matter extensively, the Stewards determined that the third track limit violation of the driver was inadvertently displayed twice on the messaging screen, bringing the total count to four infringements, but in fact the driver had only left the track on three occasions,” the statement noted.

There was a 5s time penalty and one superlicense point for Iwasa for forcing Sargeant off track at the start of the race. This dropped him out of points with Fittipaldi scoring the last one. “Having considered the matter extensively, the Stewards determined that Car 6 made a legitimate overtaking attempt on the outside and entered Turn 3 slightly ahead of Car 17. While defending, Car 17 locked up under braking and subsequently forced Car 6 off track. The driver of Car 17 was wholly to blame for the incident,” stated the stewards note.

There was a stop and go penalty for Cordeel too for overtaking under yellow flag after the chequered flag. Having had the superlicense points taken to 12 which forced him to miss Silverstone round, he has further three points added to his superlicense.

“The Stewards examined video evidence. They summoned and heard the driver and team representative (document 29),” said stewards. “The driver stated that he went through his standard end of race routine after passing the chequered flag. He drove to Parc Ferme at a moderate speed, but admitted that he did not pay enough attention to any flag signals as he was focused on other things.

“As double waved yellow flags during the race in general and after the chequered flag in particular have high priority as they are signalling that there is potential danger on track, the Stewards reinforced the fact that any infringement of such safety regulations i.e. by overtaking another car cannot be accepted and that therefore severe penalties will be imposed for such infringements. They advised the driver that he needs to pay attention to any flag signals at any time while being in the car. The driver accepted his responsibility.”

Collet covered off Correa to retain the lead into the first corner while Franco Colapinto challenged Crawford for third. Further back it was as much as four wide entering Turn 3. Correa got a run into Turn 4 and went around the outside of the MP Motorsport car to take the lead. Colapinto also managed to sneak through on Crawford in the same place before a Safety Car was deployed and neutralised the battles.

Rafael Villagomez had come to a halt at Turn 3 necessitating a recovery of the Van Amersfoort Racing car. He was involved in the squeeze at T3, and minor contact resulted in damage. David Vidales was also involved in a Lap 1 mishap and was in for a new front wing to re-join the last of the remaining runners.

The Safety Car was withdrawn entering Lap 4 and it was three Tridents that were instantly wheel-to-wheel. As Zane Maloney and Roman Stanek scrapped, Jonny Edgar slipped up the inside of the pair of them at Turn 4, emerging in P6 until Maloney fought back at the following corner to retake the place.

Correa’s strong start was for nought as on Lap Six he coasted to a halt from the race lead to leave Collet at the head of the field. Arthur Leclerc and Kaylen Frederick had been scrapping for eighth position following the Safety Car, but the Monégasque finally nailed a move into Turn 3 on the seventh lap, diving down the inside and finishing it off into Turn 4.

Up ahead on the next lap, Oliver Bearman made a late dive down the inside of Stanek to steal sixth position. His move opened the door for Leclerc at Turn 4 and both PREMA drivers were through on the Trident man. William Alatalo pulled off to the side of the circuit further back which brought out a Virtual Safety Car to recover the Jenzer Motorsport car.

The VSC expired heading onto Lap 10 and Edgar capitalised on it to relegate teammate Maloney to fifth. Crawford made it P2 for PREMA with a move on Colapinto at T3. A late dive into Turn 3 by Leclerc caused yet more fireworks as he went three-wide with teammate Bearman and Maloney. On corner exit, Bearman and Maloney made contact, pitching the Trident around as Bearman fell to ninth. The Trident driver was out, and another Safety Car was deployed to move the car away.

The track was clear on Lap 14 and as racing resumed Crawford was immediately alongside Collet entering Turn 3 and through into the fight for the lead. Their battle wasn’t resolved until Turn 7 after the American stuck with him around the outside before swooping into the lead with a brave move.

One lap later and Leclerc repeated his teammate’s effort to take fourth from Edgar in the same place. Bearman almost made it three from three for PREMA at Turn 7 after another tour but had to concede in his battle with Victor Martins for eighth position.

Trident’s fight continued as Stanek took back fifth from teammate Edgar on Lap 17 with DRS assistance. Edgar was holding on to his teammate but a wide moment on the exit of Turn 7 opened the door for Frederick to relegate him down to seventh.

Martins tried a move into Turn 3 on the following lap but had to get on the brakes to avoid contact with the Trident. That opened the door for Bearman into Turn 6, and he finally nailed a move on the ART Grand Prix driver.

Entering the final lap, the top four was separated by just over two seconds with race leader Crawford the only one without DRS. Despite the disadvantage, the PREMA driver held on to secure his first win in the third tier, ahead of Collet and Colapinto. Leclerc’s charge ended with fourth position ahead of Stanek.

A five-second time penalty for Bearman relegated him from sixth to 16th, after he was deemed to have left the track and gained a lasting advantage. Frederick took sixth position ahead of Martins, Smolyar and Isack Hadjar.