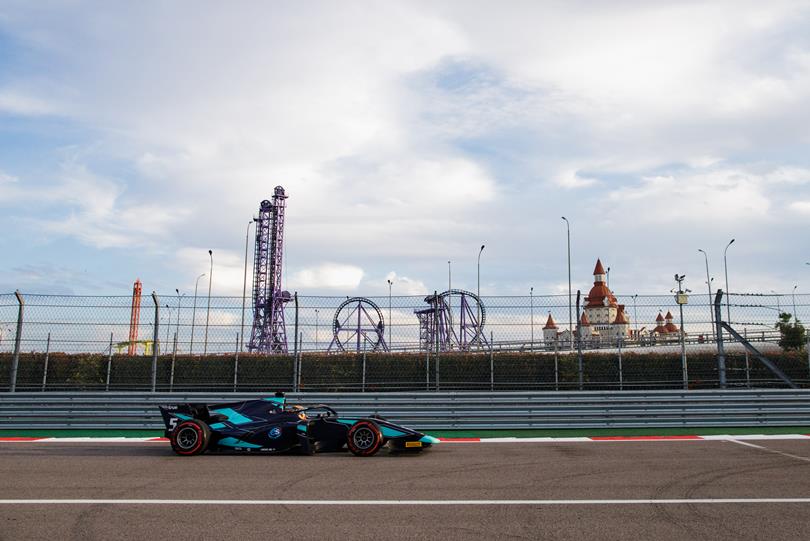 Pole-sitter de Vries made a good start to lead the race with ART’s George Russell slotting in second from Albon as Carlin’s Lando Norris dropped to fifth behind Latifi after an average start from the McLaren driver.

It seemed like a repeat of Monza with the drivers on the supersoft tyres struggling as the likes of Fuoco, Aitken, Kari, Fukuzumi, Boccolacci and Maini started to make headway in the race early on.

In no time, Markelov found himself in the lead from Fuoco with Kari close behind along with Fukuzumi and Boccolacci. Among the other runners, it was Albon ahead of the pack as the Thai driver cleared Russell early on and then gained a place over de Vries in pit stop.

He started to claw into the late stoppers as de Vries led Russell and Latifi behind. While Markelov led the way, there was a supreme fight for second as Fuoco and Kari went back and forth with Fuoco retaking the place having lost early on.

Fukuzumi also started to make headway into the race as Aitken and Boccolacci started to struggle with their soft compound. This allowed Albon to catch and pass them too. De Vries tried to do the same but had a tangle with Maini in Turn 13.

The Indian limped into the pits and was two laps down as the incident was investigated but no action was warranted. In the meantime, Markelov pitted from the lead but Russian Time weren’t ready which meant the Russian lost heaps of time to fall out of the Top 10.

Following the other stops, Albon took the lead as de Vries held second from Latifi who cleared Russell for third. The Canadian continued his inroads in the race and eventually passed the Dutchman for second after a lock-up from de Vries.

Albon eased into his fourth win of the season in a DAMS’ 1-2 with Latifi scoring his third podium as de Vries completed the Top 3. After Norris retired due to a mistake in the pit stop where he rushed out without the tyre fixed on, Russell steadied in fourth.

Carlin’s Sergio Sette Camara made up for an average qualifying to finish fifth with Fuoco in sixth from Trident’s Alessio Lorandi who gained a position after the late retirement for Arden’s Maximilian Gunther.

The German was on course for a fine seventh after qualifying outside the Top 10 with Lorandi settled for a reverse grid pole but his car gave away enabling Lorandi to seventh for the Italian to score his first points in F2.

He still has a front-row start along with eighth placed and pole-sitter Campos Racing’s Roberto Merhi as Fukuzumi and Russian Time’s Tadasuke Makino completed the points scoring positions.

The Japanese overcame a Lap 1 incident with Campos’ Luca Ghiotto which forced the Italian to retire. In the end, Markelov finished 12th behind Charouz Racing’s Louis Deletraz who also had a time penalty for crossing the line at pit entry.

Boccolacci and Aitken finished 13th and 14th respectively with Maini rejoining to finish 15th but a lap down – crucially for a better starting position for Sunday’s race as Gunther, Kari, Norris and Ghitto retired from the race with Prema’s Sean Gelael marked as DNS.