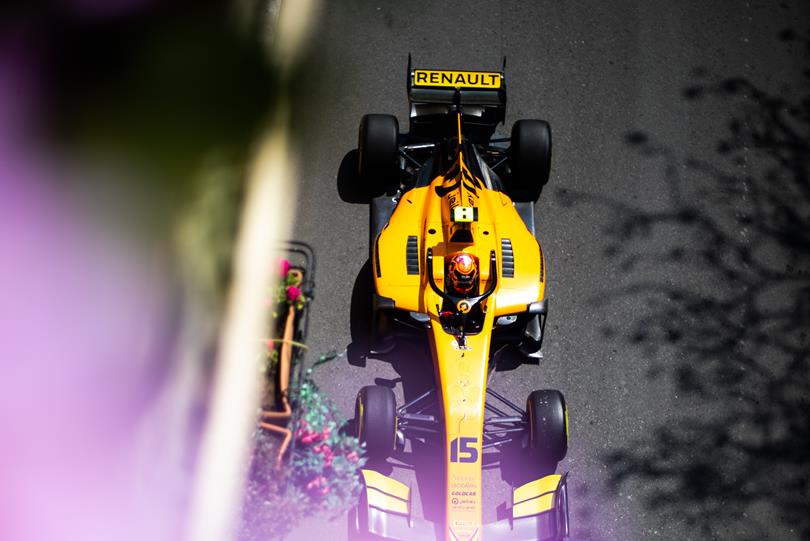 Front-row starter ART’s Nyck de Vries took the feature F2 race lead from pole-sitter Carlin’s Nobuharu Matsushita at the start in a bold move on the run-up to Turn 1 as Campos Racing’s Jack Aitken shot up to third from eighth on the grid.

The Spaniard carved his way through and cleared the DAMS’ duo of Nicholas Latifi and Sergio Sette Camara to take track position while he was also helped by Prema’s Mick Schumacher, who had a fast start but out-braked at Turn 1.

That didn’t help UNI-Virtuosi Racing’s Luca Ghiotto, who had to take an evasive action as the Italian dropped to the fag end of the Top 10 from third on the grid. Behind, there was a minor multi-car collision but enough to damage the race of at least three drivers.

The Trident teammates came together in the Turn 1 melee when Giuliano Alesi hit Ralph Boschung, with the Ferrari junior retiring immediately, whereas Boschung continued on but the Swiss driver was two laps down already under the safety car.

At the same time, MP Motorsport’s Jordan King dropped back after he was forced to take evasive action but Sauber Junior Team by Charouz’s Callum Ilott did not have the luck as he damaged his front wing and was forced to pit to change it.

At the front though, de Vries led the way after re-start, but Matsushita’s race turned into a disaster when he started to slow down with an apparent issue. He pitted as Carlin started to solve the issue as the Japanese then joined the grid but was two laps down.

His ailment allowed Aitken to take second with Latifi in third but the pit stop changed the course of the race with a slow front left change for de Vries left him vulnerable on track, with the Dutchman losing out to Aitken and Latifi.

It was BWT Arden’s Tatiana Calderon in the lead via her alternative strategy when VSC was deployed due to a spin for Schumacher at Turn 16. The Colombian though lost the lead to Aitken with Latifi and de Vries following through but hung on to fourth.

Keeping behind the pit stop drama, de Vries started to claw into the Top 2 drivers as the Dutchman passed Latifi at Turn 1. He chased down Aitken but kept a gap as they wanted to not destroy the tyres for the latter part of the feature F2 race.

Meanwhile, there were continued battles behind with BWT Anthoine Hubert fighting Campos Racing’s Dorian Boccolacci and King for fifth. It was King winning the battle when UNI-Virtuosi Racing’s Guanyu Zhou crashed out in Turn 1.

The Renault junior was caught surprised by the braking of Sauber Junior Team by Charouz’s Juan Manuel Correra. As he took the evasive action, he ran over the kerb and went straight in the Turn 1 run-off as the safety car was deployed.

It looked good for Calderon for a moment as she was waiting for a safety car to help her with the alternate strategy but to her unfortunate luck, the Colombian stopped under the safety car to retire. The re-start caused further mayhem with multiple incident.

Just as the safety car pulled in, Carlin’s Louis Deletraz ran into the back of Boccolacci while Camara spun to hit the wall, while also clipping Ghiotto with Deletraz retiring along with Camara. With the safety car out again, Ilott also pitted to retire.

With only 13 cars remaining in the feature F2 race at Baku, it re-started for the final time as Aitken led the way from de Vries when King passed Latifi for third as Hubert dropped down from fifth after out-braking himself in Turn 1.

The lead stayed with Aitken though as he held on to score his first win of the 2019 F2 season and his first feature race and second overall with de Vries having to settle for second and King completing the podium in a spirited performance.

Latifi had to settle for fourth after losing out to King with Boccolacci doing well in fifth with two Campos cars inside the Top 5 positions. A fightback from Ghiotto saw the Italian climb back up to sixth on the final lap after the late pit stop.

He is under investigation though for the collision with Camara on re-start. Behind him Prema’s Sean Gelael, who fought his way up from last to seventh with Correa ending up eighth and taking a sprint race pole position.

The Top 10 was then rounded out by ART’s Nikita Mazepin and Renault junior Hubert with the Frenchman getting back in points after the re-start drama. He passed MP Motorsport’s Mahaveer Raghunathan, who looked set to score his first points in F2.

The Indian started from the pitlane and ran without any dramas to climb up to 10th but Hubert late pass dropped him to 11th with Boschung and Matsushita the only other finishers behind him on the lead lap after they un-lapped themselves under safety car.

UPDATE: Post-race penalties saw Ghiotto receive a five-second time penalty which dropped him to ninth with Gelael moving up to sixth, Correra to seventh and the reverse grid pole going to Mazepin.

In another penalty, Boccolacci was given a two-place grid drop for Sunday’s sprint race after the Frenchman failed to enter the pitlane at race director’s order after the chequered flag. He will start from sixth as a result.