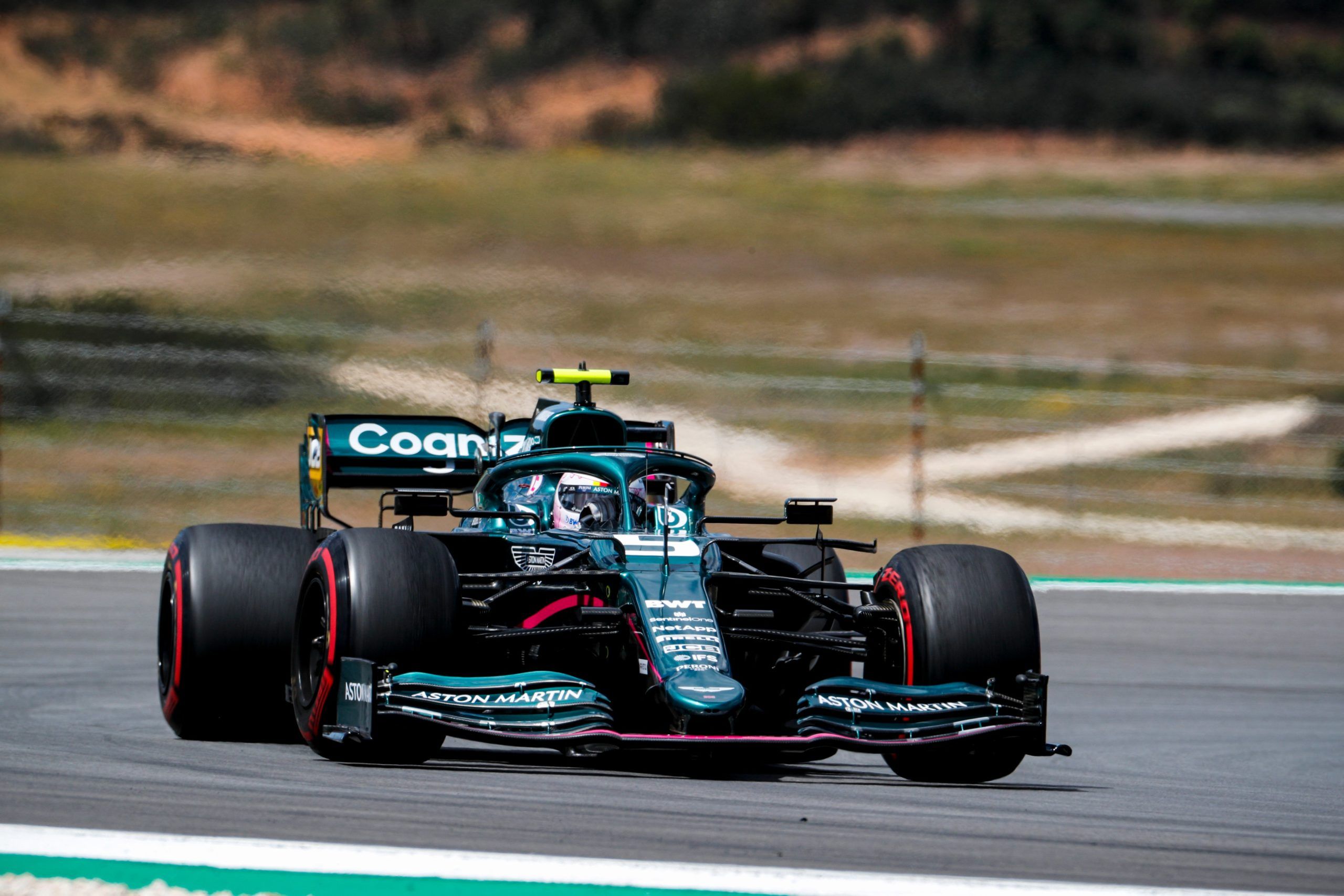 The Saturday in F1 Portuguese GP weekend had grip issues continuing with an anti-climatic end where even the pole-sitter didn’t improve.

Polesitter Valtteri Bottas from Mercedes, who denied teammate Lewis Hamilton a pole in Saturday’s F1 Portuguese GP qualifying, was relieved to take the top spot after struggling in Qualifying sessions earlier in the year.

Bottas described maximizing the performance of his W11 in Qualifying as a “weakness” in 2021, but says a positive weekend left him feeling confident. Heading into Sunday’s Grand Prix, Bottas says he and Mercedes are in a good place to defend from Red Bulls behind.

“[Getting pole] definitely it put a smile on my face because in the first two races of the season the qualifying from my side, at least the Q3 session, hasn’t been the strong point,” said Bottas. “Getting everything out of the tyres and getting the tyres to work well has been a bit of a weakness but now it felt like things were starting to go in the right direction.

“I’ve been feeling strong all weekend, so I knew it was possible and it definitely makes me really happy to put it together in Q3 and be on pole and as a team as well, with the pressure and the battle from Red Bull it’s good to be ahead,” the Finn said.

Bottas continued to say that Mercedes showed promising pace on long runs during Friday’s practice sessions, but still maintained that the team face a tough opponent in Red Bull. “It didn’t seem to bad on Friday but it’s always [just] Friday. We will truly see in the race how the tyres behave, if there are going to be any gaining issues and I reckon it’s going to be a tough battle with Red Bull no doubt.

Hamilton described his session, meanwhile, as “messy” with wind and low grip negatively affecting him throughout all three sessions in Qualifying. The seven time champion also praised his teammate’s work in the challenging conditions: “It was a difficult session, I think, for everyone,” he said. “It’s not that easy here, particular as it’s windy and it’s quite slippery on this surface. So, I think it was challenging for everyone.

“Quite a messy session really, for me. Q1 wasn’t good, Q2 I only had one good lap and I would say in the whole session generally I only had that one lap. Q3 was pretty poor also. Valtteri did a great job, given the conditions that we’re in,” Hamilton said.

The Brit made an interesting decision to run on the medium tyres for his Q3 runs, and he acknowledged that this may have been a mistake – especially given his dissatisfaction with the hard nature of the Pirelli tyres brought to Algarve.

“[To use the mediums] probably wasn’t the right decision at the end but it was just tricky out there,” said Hamilton. “You saw us having to do multiple laps. The tyres are too hard here, so they don’t work very well with the surface so we have to do extra laps to get temperature in and at the end, just didn’t have very great grip, so didn’t do the greatest job.”

Hamilton and Bottas both beat Verstappen after the latter had his fastest Q3 lap deleted, allowing him the opportunity for only one lap in the final minutes of Qualifying. Verstappen’s efforts landed him third in the continuation of his “hit-or-miss” weekend.

The Dutchman was frustrated by the result, saying he’s yet to drive a lap that left him satisfied, with insufficient grip to blame for his woes: “The layout is amazing but grip we are experiencing, I don’t think it’s nice,” said Verstappen. “I know it’s the same for everyone, but for me personally, it’s not enjoyable to drive.

“But then, I started off in qualifying really slow. I had no balance in the car. We slowly got to a point where I was happier but it was basically just compromising one thing and then also losing a bit of performance in the other thing – so it was just not nice. And then I had my little moment in Turn 4 on the first run in Q3.

“At the end it showed that was the fastest lap, but… it just showed that it was a really difficult session to get any kind of grip in it because that corner is flat and suddenly, out-of-the-blue the car just snapped on me and I ran a bit wide. And then, I thought, I can do that lap again, so I go out and I was within a tenth of the lap and in the last sector I lost all my lap time. An Aston Martin in front and then taking my tow on the line as well. Yeah, messy – but it is what it is,” the Red Bull driver summarized.

His talk about McLaren’s Lando Norris hurting his lap became a small controversy, when Helmut Marko rubbed it in stating that the British F1 driver was asked on radio to give no quarters to Verstappen. “Of course it’s frustrating when you set the fastest time,” he said to Servus TV. “But in Turn 4 on his first run he got a gust of wind from behind and it took him out. He lost time because of it, not gained.

“Then on the second run, Lando Norris got told not to do Max any favours. Very sporting of the Mercedes squad. And then with Vettel, of course, he was busy with the car, that he keeps it on the road. It was a bit unfortunate.”

But both Norris and Andreas Seidl rubbished the idea – when speaking to media including FormulaRapida.net. “I’ve no idea what I did wrong,” said the Brit. “I was sure I was quite far ahead of him and then, when I let him pass, I was completely on the right, on like the opposite side of the track, in second gear as slow as I can go.

And Seidl added: “First of all, we have to make it clear, we drive for ourselves and not for anyone else. Our aim is to finish as high up as possible with our two cars. I guess it’s normal that, like everyone is doing, and Max was no different, you don’t want to give anyone a tow, because it’s a benefit for the other car.

“Qualifying is about doing the laptime yourself without the help of anyone else. And I think this radio call probably they are referring to…when you look at what everyone did on the main straight, after finishing the lap, you just tried to get out of the way, out of the slipstream, to make sure that everyone can do his lap himself, and without additional help.”

It wasn’t a good day for McLaren, though, with Norris only seventh and Daniel Ricciardo 16th. The Australian had a lock-up, but he felt his first lap on the soft wasn’t good enough either. The wind and slippery condition did not give him enough confidence and he paid the price ultimately, which hurt him in all honesty.

The conditions were same for all and going back to Red Bull, Verstappen’s F1 teammate Sergio Perez was in the same boat, where he struggled to keep the car on track. He ended up fourth but revealed that he almost the car himself. He wasn’t comfortable and confident with the car at all, which doubled his problems.

There was some joy behind him, though, with Ferrari’s Carlos Sainz and Alpine’s Esteban Ocon beating their F1 teammates. The Spaniard had to switch to soft tyre to make it into Q3, but he was pleased that his approach is finally clicking with the team. His teammate Charles Leclerc was only eighth after admitting to have pushed too hard.

He lost the rear and made a mistake, which allowed the likes of Ocon and Norris to leapfrog him. The Frenchman made it in Q3 for the second F1 weekend in a row, but teammate Fernando Alonso lost pace between FP3 and qualifying, after looking to be in a good place.

While Alonso had troubles, Aston Martin’s Sebastian Vettel found joy by making it in the Top 10 for the first time since last year’s Silverstone F1 race. In fact, teammate – who had upgrades on his car – lost out in Q1 itself after traffic compromised his lap.

“I am feeling happier after that session,” said Vettel. “We are starting inside the top 10 and will be in the middle of a big fight for points. There is still a lot of hard work ahead of us, but things are starting to click for me and become a bit more automatic, which is helping me focus more on my driving. I am still learning about the car, but I felt more comfortable,” he summed up adding that his lap in Q3 wasn’t perfect.

He will have the likes of AlphaTauri, Williams and Alfa Romeo around him, with Pierre Gasly just making it in the Top 10, whereas George Russell and Antonio Giovinazzi missing out, but doing a solid job still in Q2. In fact, the Brit reckons points are possible.

His teammate wasn’t in the best position after a run-in with Haas’ Nikita Mazepin. The radio from Latifi reckoned that they didn’t spot the Russian on time, while he was approaching the Canadian. He eventually passed him and seemingly blocked him as per the Williams F1 driver. There was no investigation or penalty for it, though.

When Latifi was passed by Mazepin, the Canadian F1 driver feared he will block him, which as per him happened. “He’s probably going to block me,” he said on the radio. Yeah he’s going to block me. What a… I got blocked, of course. What a dumb idiot. Like, I didn’t do it on purpose. This guy’s a dumbass.

“[But] Yeah I mean you’ve got to give me better info. This guy’s a fucking idiot, like, okay, I didn’t see him. Don’t…,” Latifi stopped, as his race engineer told to discuss it later. Mazepin, meanwhile, shunned the theory down that he purposely blocked someone.

“I always care about my competitors,” said Mazepin to media including FormulaRapida.net. “I want to live in a world where everyone’s happy. Unfortunately, when there’s only three places on the podium and one driver called winner, there’s never going to be a happy 20. I’d never do anything on purpose to mess somebody’s lap.

“I have to really watch the onboard, to be honest, because I’ve been told that he’s three seconds away, and from what I’ve seen, he was not very close. So I mean whatever you call ‘blocking’ is a bit of a tough part. If you look how close I was to him in the last corner, I’m sure it was less than four tenths.

“So I will analyse and hopefully it won’t happen again. But I’m very sorry that he’s upset. The amount of time we need between each other for the aero efficiency to work is around five seconds-plus. So it doesn’t always go to plan. I was pretty fortunate that three of my laps were without traffic.

“The one that counts when the track is there and I’m there was with traffic but it is the nature of the game. When you get to Q3 it’s better, but unfortunately, we’re not there yet,” summed up Mazepin, whose teammate Mick Schumacher beat him again in qualifying.