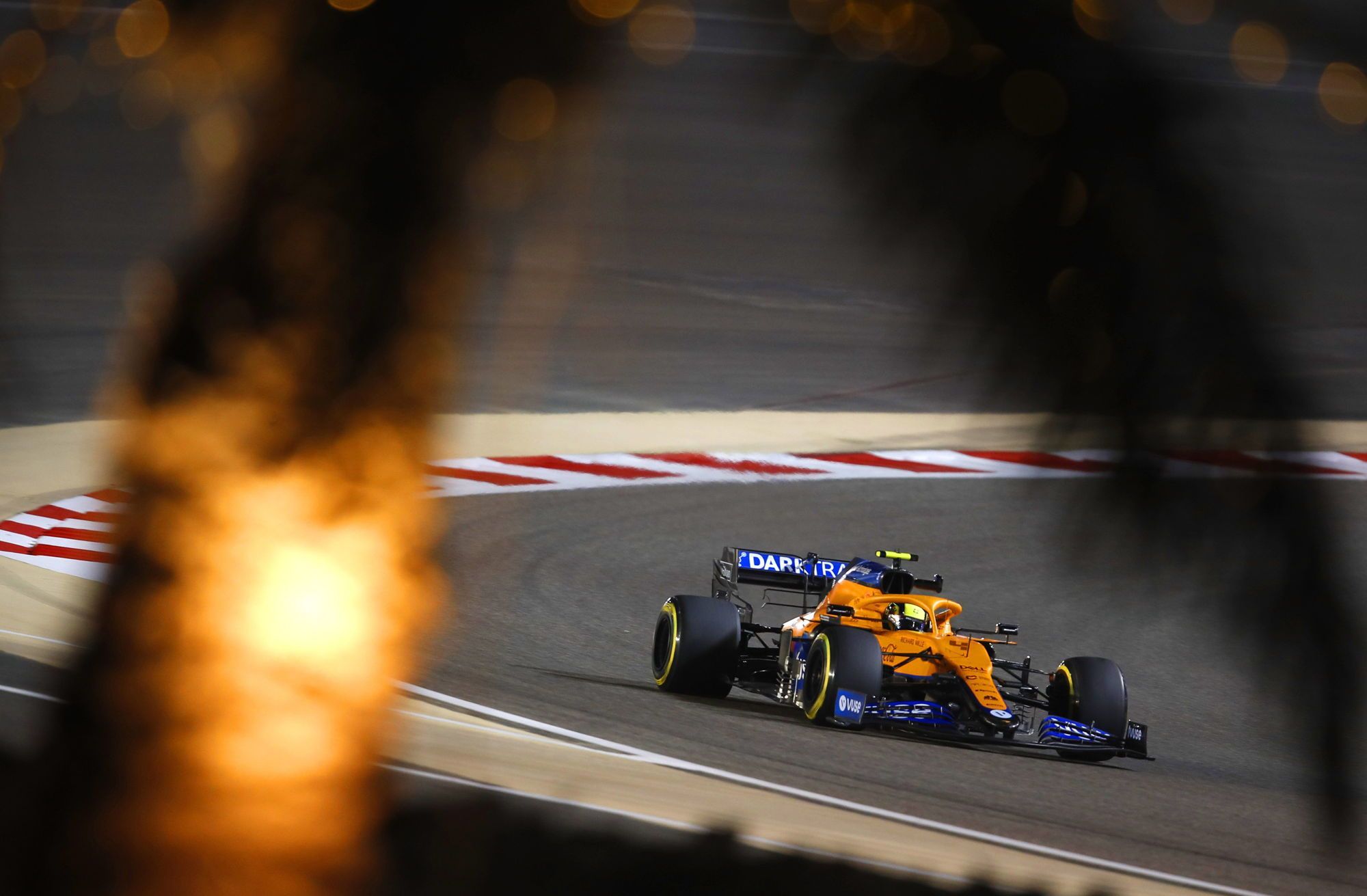 Red Bull and McLaren played the charging game on F1 Bahrain GP Friday, as Mercedes pushed itself into it, while Ferrari made some gains.

As was expected, Red Bull kept themselves in the hunt on the top on Friday of F1 Bahrain GP. While Max Verstappen showed his potential one-lap pace, teammate Sergio Perez did note about lack of confidence in that department – both showed good race pace, though.

Verstappen was oozing with confidence after topping both FP1 & FP2, but the real challenge will be qualifying and eventually the F1 race, whereas Perez noted about his one-lap shortcomings. “It feels great to finally get into a race weekend and I’m pleased so far with how things are going,” he said. I’m settling in well and taking some steps forwards.

Moving on to their immediate F1 rivals, Mercedes were in the mix certainly, despite the comment from Valtteri Bottas of ‘undrivable’ towards the end of the FP2 session, while McLaren posed a surprise, especially at the hands of Lando Norris.

The British racer finished no less than Top 3 in both sessions, while Daniel Ricciardo seemed up to speed already with the McLaren F1 machine, even though he hinted on still learning and getting things into his stride session-by-session.

“I think we started where we left off in testing, which is a good thing,” said Norris. “The car has improved in some areas, which is positive, but other areas have got a little bit worse. It’s been a tricky day to put it all together but on the whole I’m happy. Here and there we’ve got some work to do, but if we can put it together, hopefully we can be competitive.

“We seem to be very close to AlphaTauri, Ferrari and other cars, so will definitely be tight, but we’ll see what we can do.” The Mercedes F1 duo, meanwhile, noted about feeling better with the W12 than testing, with much more stable rear after set-up changes.

Neither of the drivers had a clear top times, where Bottas struggled the most on long runs, especially in FP2. “It felt like we’re still not yet there with the car balance, but it was a trouble-free day and no big issues,” said the Finn. “I think the main thing in my mind is that we have plenty of work to do if we want to fight for the pole this weekend.

“The last long run we did was pretty difficult: I couldn’t really put any laps together and the car felt nearly undrivable at times. But it’s only Friday and that’s why we do practice. We’re definitely in the mix. McLaren looked strong, so too Red Bull as expected,” summed up Bottas, as Lewis Hamilton concurred about a better stability but still work to do.

Aside these three, as Norris mentioned, both AlphaTauri and Ferrari did not disappoint either, as much. The former looked in a better shape with both Pierre Gasly and rookie Yuki Tsunoda. The team found some issue with the Japanese F1 driver’s car towards the end of the FP2 session, but it wasn’t something huge.

Gasly, meanwhile, felt confident with both his short and long runs, having finished inside the Top 10 in both the sessions. Another to match or even go beyond the expectations were Ferrari, where Charles Leclerc thought, they did much better than he expected they would, especially on first day of running in 2021 F1 season.

Even though Leclerc finished out the Top 10 in the second session, but they had Carlos Sainz in there nicely. “It has been a good day and maybe we didn’t expect to be as competitive,” said the Monegasque. “Though it’s still very early days for now, FP1 was positive on my side and FP2 a bit less.

“I’ve been struggling a little bit with the car rear end and didn’t manage to finish the lap I wanted to, but even though overall there’s still a lot of work to do I can feel there’s a lot of motivation in the team and I can see and feel the improvements that have been made since last year. This is good for now.”

Teammate Sainz devoted his time in learning the car in different conditions, as he still learns the minor tricks with it. While the above five F1 outfits ran mostly inside the Top 10, Alfa Romeo Racing were another to be up there with both Kimi Raikkonen and Antonio Giovinazzi – even though the former had a crash in FP2 session to lose time.

Both noted that the pace seen in the F1 test was replicated in the first weekend, which gave them confidence that they are on the right path in 2021. They felt happy with the balance and aim to fight for points but are wary of competition from both Aston Martin and Alpine, who looked a bit off-colour on the first day.

While Alpine chief stated that the team weren’t chasing lap times, which makes it tricky to ascertain if they can go any further in the order. It was a mixed bag for Aston Martin too, where Sebastian Vettel is still learning the tricks of the F1 car. It will be to see in qualifying if both the outfits can manage to step it up or will be left to chase McLaren and others.

At the back, it was a mixed bag for both Haas and Williams, where the former devoted much of the time of Mick Schumacher and Nikita Mazepin in learning the car as the two F1 rookies continue to find their way. It was trouble-free for both but they did find it hard, much like Williams’ Nicholas Latifi. His teammate George Russell did so too, but manage to steady the ship still, where he felt the race pace seemed better than expected.

In other news, Nico Hulkenberg confirmed about being a reserve of both Aston Martin and Mercedes in 2021 F1 season. For the latter, the German will be filling up in races where both Stoffel Vandoorne and Nyck de Vries will not be available. He revealed the news while on his first assignment with Red Bull’s ServusTV.

Here’s how FP1 of F1 Bahrain GP panned out

Here’s how FP2 of F1 Bahrain GP panned out