It was a Carlin 1-3 with rookie Nikita Troitskiy winning Race 3 of the 2018 FIA European Formula 3 Championship at Zandvoort from Prema’s Guanyu Zhou and Jehan Daruvala after pole-sitter Dan Ticktum was penalised for a jump start.

Red Bull junior Ticktum led the way at the start from Troitskiy and Zhou after front-row starter Motopark’s Juri Vips couldn’t get going as the five red lights went off with Zhou and Carlin’s Jehan Daruvala having to evade hitting the slow car.

Eventually, the Estonian managed to get going but he was already at the back of the field. Meanwhile, as Ticktum led in the front, he was then put under investigation for a potential jump start. The replays showed a slight movement but it wasn’t clear enough.

However, the stewards with all the sensors deemed he did jump the start and handed him a drive-through penalty which dropped him to the back of the field. The team decided to then retire the car.

This helped rookie Troitskiy to take over the lead from Zhou and Daruvala. The Russian then took his maiden European F3 victory under special circumstances after a red flag ended the race five minutes before time.

The safety car was deployed the second time after ma-con’s Julian Hanses crashed into the barrier which made it difficult for the tractor to pick up the car. They tried to pull out the car from the gravel but the recovery car itself got stuck into the gravel.

This forced the organisers to red flag the race with Troitskiy winning from Ferrari junior Zhou and Force India junior Daruvala – the Indian was racing with a wounded hand after his clash with HitechGP’s Enaam Ahmed in Race 2.

With both Vips and Ticktum out, it was Motopark’s Marino Sato in fourth leading teammate Fabio Scherer – with the latter taking his best European F3 result. The lead HitechGP car was of Alex Palou in sixth.

After a difficult start to the weekend, Carlin did well with even Ferdinand Habsburg finishing seventh from Motopark’s Jonathan Aberdein with Van Amersfoort Racing Artem Petrov making five places to score his first points in ninth.

However, the Russian was under investigation for overtaking during the safety car along with Motopark’s Sebastian Fernandez. For now, Petrov is ninth after he fended off the charging Ahmed – who started in 16th after his three-place penalty for Daruvala clash.

For the Prema drivers, the second best time was undone in Qualifying 2 and it left them with a hard task to overtake on a circuit notoriously difficult to. After dominance in the first two races, only Zhou could score points.

It actually helped the Chinese driver in the championship as all his other title contenders Ticktum, Marcus Armstrong and Ralf Aron couldn’t score at all. He is now only one point behind Armstrong after four rounds.

UPDATE: The final results was taken at Lap 14 when safety car was deployed, meaning the race didn’t see through the 75 percent rule to adjudge it as a full race. It didn’t affect the results per say but the points scored were halved – denting Zhou’s inroads.

The Ferrari junior is third now with 121 points as Armstrong still leads with 131 ahead of Aron with 126.5. If it was a full race, as mentioned above Zhou would have been just a point behind Armstrong.

UPDATE: Further updates from the stewards saw them restore full points for the final race which means Zhou is now only one point behind leader Armstrong and Aron in third with 126.5 points. 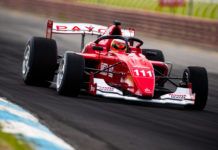 Barrichello returns to S5000 which includes Australian GP round