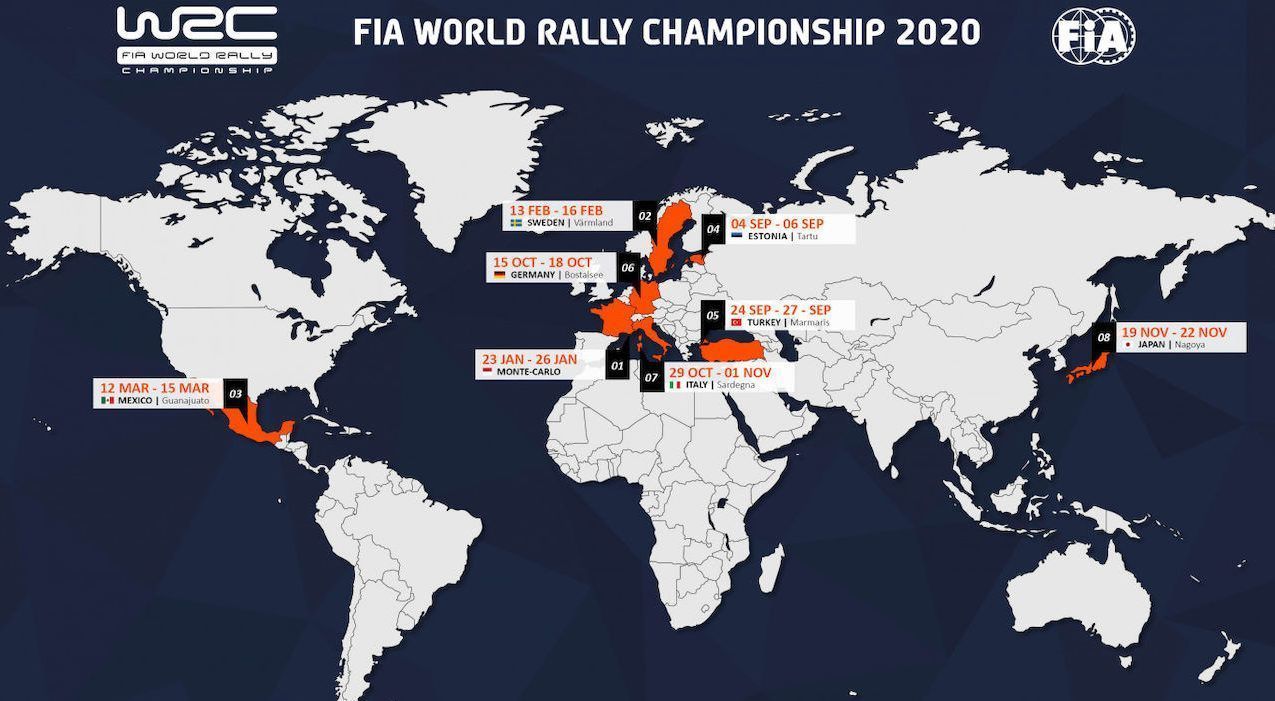 After an early end to Rally Mexico back in March, WRC has seen six cancellations where one of them – Chile – was cancelled for different reasons other than COVID-19 pandemic. Rallies like Italy and Argentina were marked as postponed with a new date being sorted out.

Among those, Argentina joins the cancellation list but Italy has got a new date of October 29 – November 1. As for the rest, Estonia is the new entrant as WRC tries to have as many events as possible, with the rally to take place on September 4-6.

Estonia was not part of the original WRC calendar but it hosted a promotional event in 2019 in the hope to find a spot as a gravel rally. Apart from these two, Turkey (September 24-27), Germany (October 15-18) and Japan (November 19-22) stays on as well.

As things stand, WRC will return to action Estonia first in September, followed by rallies in Turkey, Germany, Italy and Japan. Interestingly, the Japanese rally stays on to be the finale despite the country cancelling its F1 and also MotoGP rounds.

Outside the above, there is a possibility of Belgium joining the WRC calendar too with Ypres Rally on October 2-4 date, as they are in advanced talks to make it happen. Additionally, discussions are on with Croatia as well for a possible event.

Initial details regarding Estonia states that the event will be a short taking place on Saturday and Sunday with shakedown on Friday – based in Tartu region. Also the Italian event will be based in Alghero area with more information to come later on.

“Today’s restart announcement sends a clear signal that the 2020 WRC is back in business,” said Oliver Ciesla. “WRC Promoter has worked tirelessly with the FIA, our competitors, teams and potential rallies, in exceptional circumstances, to revise the calendar.

“Today’s news allows the WRC to restart at an appropriate time and ensure a season worthy of world championship status. Fans demonstrate huge passion for WRC in both Estonia and Italy. The expectation there, and across the sport in general, will build rapidly from now ahead of September’s championship restart.”

FIA rally director Yves Matton said: “I am pleased to announce the 2020 WRC restart calendar following a few months of discussions that have required a great deal of flexibility from all stakeholders in unprecedented times.

“In light of this revised schedule, I am confident we will secure a minimum of eight events this year and this is thanks to the great commitment and work from organisers. As one of the newly proposed rounds, Rally Estonia will be reopening the season in September and I know the Estonian Autosport Union and organising team are putting all their efforts to deliver an event to world championship standards from an already solid foundation.

“Also, extensive work was made with ACI and organisers of Rally Italia Sardegna to reschedule the event and I am happy that they could find a workable slot at the end of October for this much-awaited encounter.

“Preparations for these rounds are now in full swing while paying the greatest attention to key planning recommendations for mass gatherings in the current Covid-19 context. We are naturally truly disappointed we couldn’t find a logistically viable solution to reschedule Rally Argentina, particularly given all the hard work undertaken by Automovil Club Argentino and every member of the organisation.”