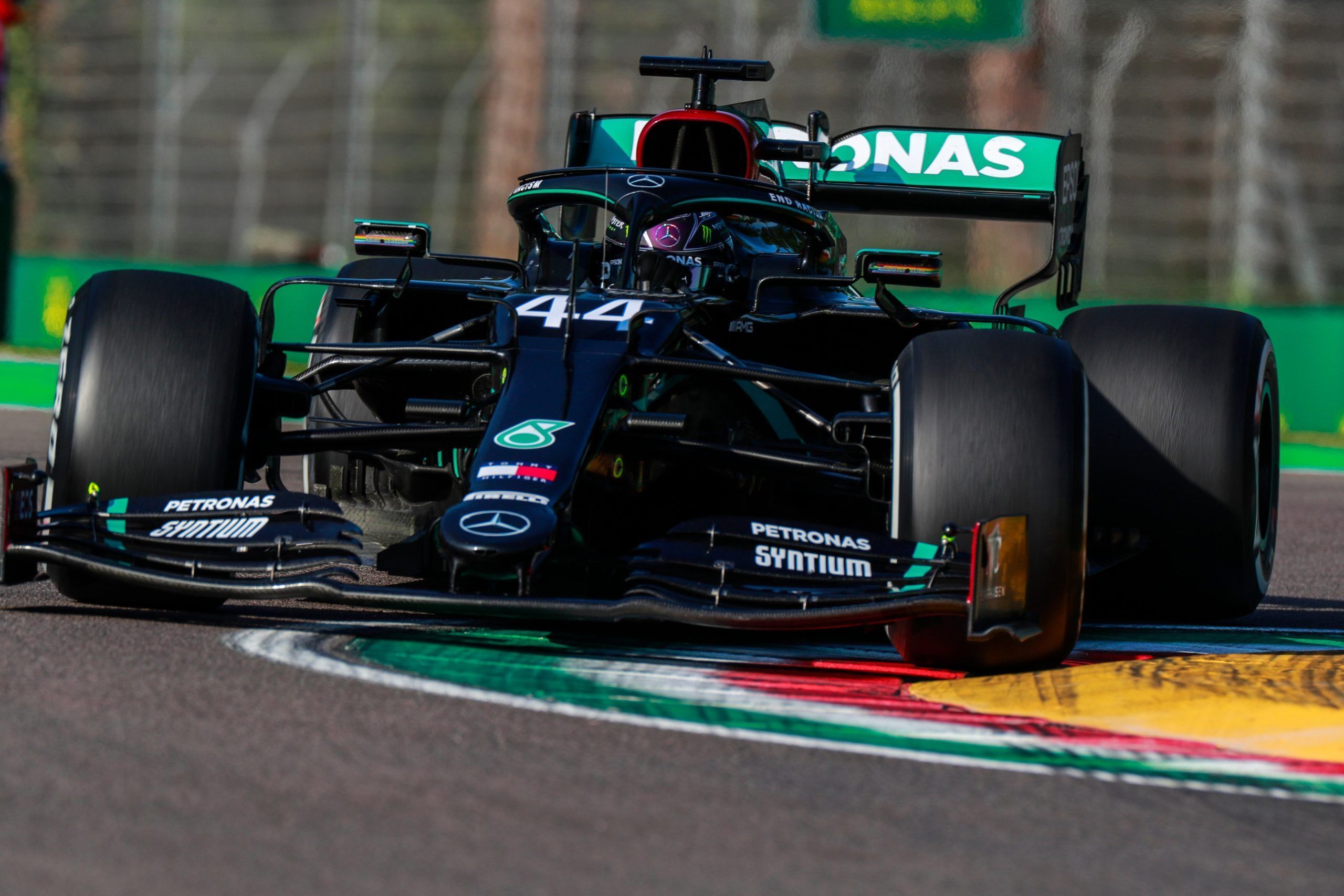 Due to the distance between Algarve and Imola, F1 were forced to switch to a two-day weekend in the latter where they decided to have just one practice session of 90 minutes before the qualifying and the all-important grand prix.

It was the return of Imola in F1 since the 2006 season. With just the one session, it was busy all-through, where the drivers not only had to test all of the three compounds but also get through the qualifying sim and also check out the race trim.

Track limits at Turn 9 and Turn 15 was there to be seen with multiple lap times getting deleted for almost of all the F1 drivers. It was Mercedes ahead as expected with Hamilton leading the sole Emilia Romagna GP practice with a 1m14.726s lap.

Teammate Bottas was third with a 1m15.218s as Red Bull’s Verstappen displaced the two in second with a 1m15.023s. They were all plagued with track limits, just like Alexander Albon (1m16.061s) in ninth after the Thai driver continue to struggle more.

The two Renault drivers managed to get ahead of Albon as Daniel Ricciardo (1m15.839s) was sixth with Esteban Ocon (1m15.945s) in seventh. The latter had a brand new engine fitted onto his car along with Williams’ Nicholas Latifi for Emilia Romagna GP weekend.

In fact, a late lap of 1m16.005s on the soft compound from AlphaTauri’s Pierre Gasly (1m15.633s) allowed him to be fourth with the Italian F1 outfit being the only one to have tested in a filming day with the 2020 car before the re-start of the current season.

Gasly improved to sixth first and then went for another quick lap to finish fourth eventually. His teammate Daniil Kvyat (1m15.966s) was eighth after his own late lap despite an early off at Turn 2. Ferrari’s Charles Leclerc (1m15.688s) improved to fifth on the last second.

The Monegasque was outside the Top 10 until the last moments of the session despite complains of troubles with the car. The late improvements pushed Racing Point drivers to 10th and 11th with Lance Stroll (1m16.082s) ahead of Sergio Perez (1m16.109s).

The Canadian was another have to had a run at Imola, with him testing a GP2 car. It was improvement from Ferrari’s Sebastian Vettel as well in the dying moments as he jumped to 12th with a 1m16.167s – having been last for most part of the session.

Haas’ Romain Grosjean did well in 13th ahead of McLaren’s Carlos Sainz (1m16.560s), who had his best time on the medium compound. It also included a gravel trip in the final corner as teammate Lando Norris (1m16.671s) was only 16th after his quick lap was deleted.

Elsewhere, Sky Italia reported that Ferrari team principal Mattia Binotto is slated to miss the Turkish GP at Istanbul Park with Laurent Mekies taking over – something which will be seen in 2021 too. The Italian will be at Maranello to work towards 2021 season.