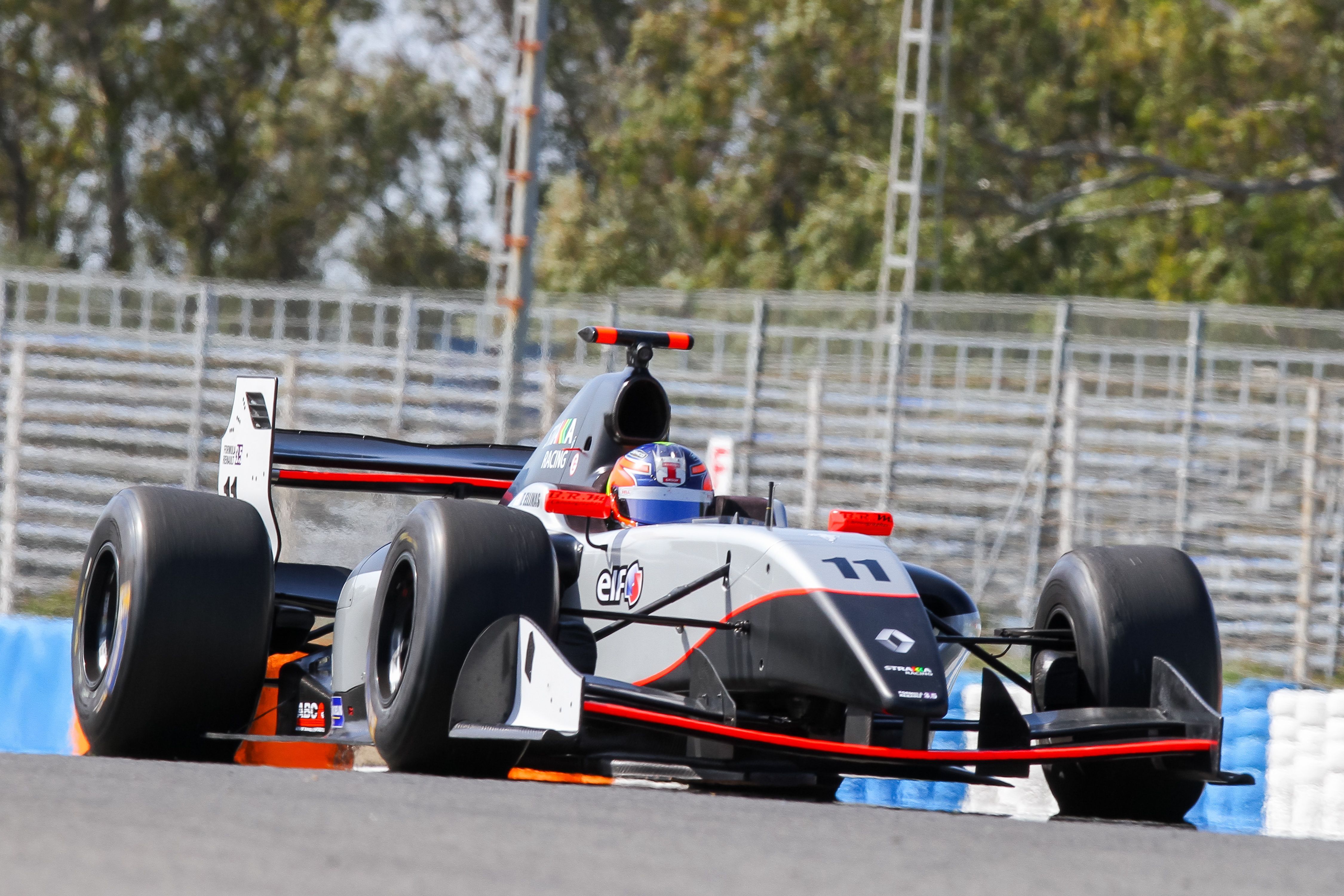 The 2015 World Series by Renault season kicked off with the opening day of collective testing for the Formula Renault 3.5 Series. 22 drivers and 11 teams were present at the Circuito de Jerez this Thursday. Tio Ellinas (Strakka Racing) led the way with a best time of 1:27.430 in the afternoon ahead of Oliver Rowland (Fortec Motorsports) and Roberto Merhi (Pons Racing), who set the fastest lap of the morning.

The Formula Renault 3.5 Series drivers and teams started their new campaign at Circuito de Jerez. On the track that will host the World Series by Renault season finale, the competitors began their preparation, especially with the low-downforce configuration that will be mandatory during Saturday qualifying and race 1.

Pietro Fantin (International Draco Racing) was first to put in a lap time and was followed atop the leaderboard by Tio Ellinas and Jazeman Jaafar (Fortec Motorsports). Tio Ellinas re-took best time, but Roberto Merhi then went quicker. At the end of the session marked by eight interruptions, the Spaniard’s effort of 1:27.579 allowed him to finish ahead of Tio Ellinas, Dean Stoneman (DAMS), Pietro Fantin and Jazeman Jaafar.

In the afternoon, Matthieu Vaxiviere (Lotus), Tio Ellinas and Gustav Malja (Strakka Racing) took turns in first place. Nyck de Vries (DAMS) then took over, before the spectacular accident without consequence of his teammate, Dean Stoneman. The winner of the Eurocup Formula Renault 2.0 then saw Meindert van Buuren (Lotus) and the Fortecs of Jazeman Jaafar and Oliver Rowland dispossess him. After the Brit went off the track, Tio Ellinas went 4/1000ths of a second better in the waning seconds of the session. Beitske Visser (AVF) and Pietro Fantin completed the top five.

Tio Ellinas: ”The day went well. We were atop the charts from the start while working on the balance and the set-ups for the car. This morning, there was a red flag during my run on new tyres. We thus continued our programme before testing the low-downforce tomorrow. We saved a set of fresh rubber for the end, but when I went on track, there was another interruption. With three minutes left on the clock, I only had time for one lap. I attacked flat-out and it was best time! This season, the competition is very high but the goal is obviously the title, or at least the top three.”

Oliver Rowland: ”This morning was strange. It is always weird to use tyres from last year! I wasn’t very fast, so I tried to be constant to try some things. Everything went better this afternoon. Tomorrow, we have to try the low-downforce configuration. The objective in 2015 is clear: the title. Roberto Merhi, the two DAMS drivers, Nicholas Latifi and Tio Ellinas will all be contenders.”

Roberto Merhi: ”This was my first day in the Pons Racing team car. We did a lot of testing in the morning. We set the best time while not concentrating on performance. This afternoon, a red flag ruined my fastest lap, but I am thrilled with the improvements made to the car. After having taken Zeta close to the title, I want to win it with Pons! Tomorrow, we will focus on the low-downforce set-ups.”

Jazeman Jaafar: ”We concentrated on our high-downforce programme. We had a problem this morning, but we managed to regain the lost time while saving our new tyres for the end of the day. This year I am in a good environment and there is no reason why I shouldn’t be at the front. It is still early to name the rivals, but Oliver Rowland and Tio Ellinas are serious contenders.”