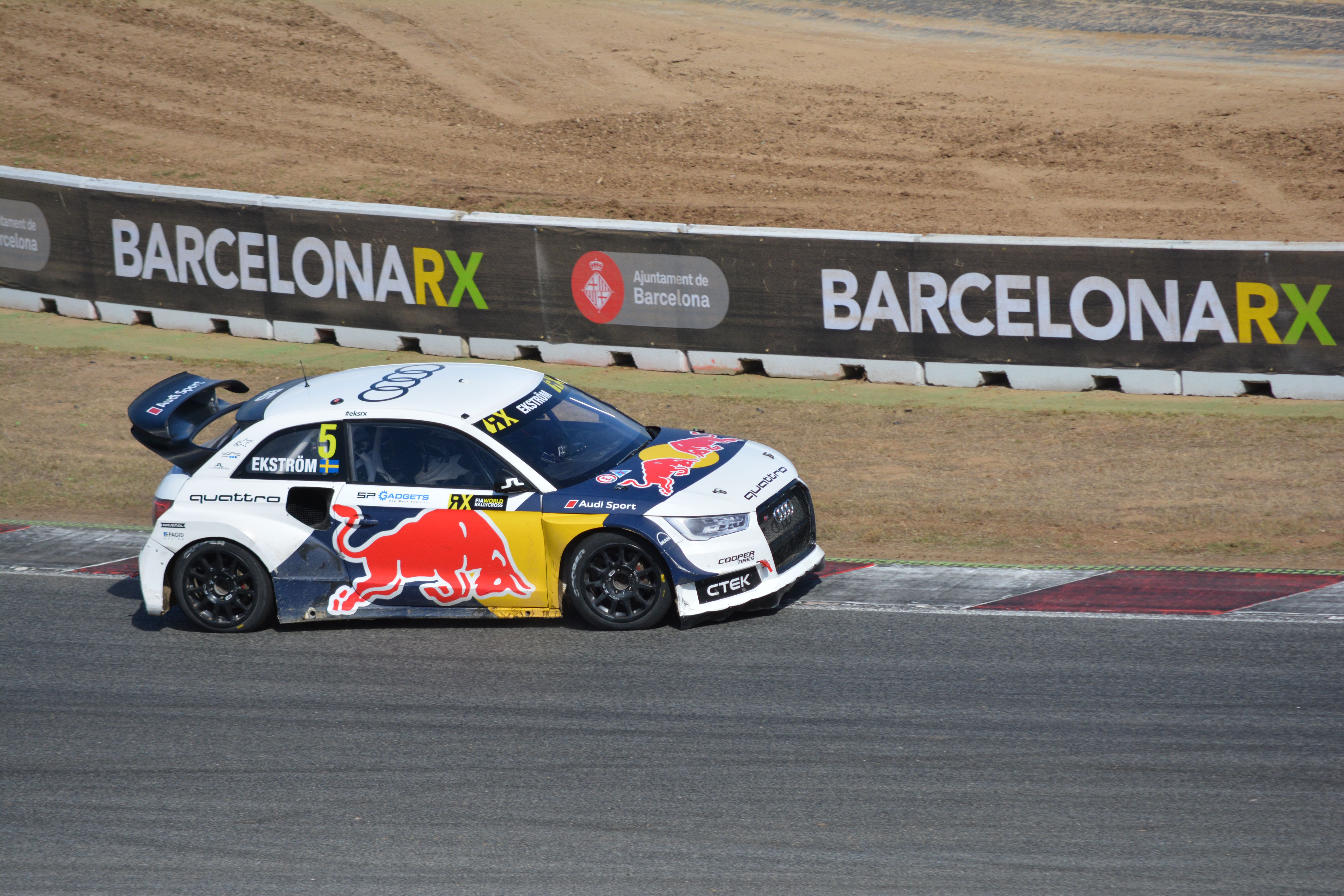 Sweden’s Mattias Ekstrom took a lights-to-flag victory at World RX of Barcelona, round nine of the FIA World Rallycross Championship presented by Monster Energy, to regain the World RX Championship lead from Petter Solberg. It is Ekstrom’s fourth victory of the season for EKS. Team Peugeot-Hansen’s Timmy Hansen was runner-up while World RX Team Austria’s Timur Timerzyanov took his first podium of the year after placing third.

In the FIA European Rallycross Championship, where Barcelona marked the penultimate round, it was Kevin Hansen who took the victory and also won the Championship with one event still remaining. “This has been a dream of mine since I was a little boy,” said the elated 18-year-old. One round of Euro RX remains in Latvia in two weeks’ time but Hansen’s four event wins and 30-point lead makes it impossible for his competitors to catch him in the overall standings.  Norwegian drivers Tommy Rustad and Tord Linnerud finished second and third respectively.

“I’m really happy – to win a race in World RX makes me smile every time,” admitted Barcelona RX winner, Ekstrom, who also scooped the Monster Energy Super Charge Award for beating his competitors to the first corner during today’s final. “At the start of the season, there were only a few drivers who could take a victory but now there are so many who can win – the competition is very tough and you need to be on your A-game throughout the weekend to be in with a chance.  This weekend the competition has been fierce so this win feels even more special today.”

Ekstrom’s win this weekend now sees the Swede lead the World RX driver standings by 10 points but the question remains as to whether he is able to miss a round of DTM in order to compete at Buxtehude in Germany next month.  Ekstrom took up the story: “The entry deadline for the Buxtehude race is next week so I’ve been getting asked about what I’m doing a lot at the moment.  I haven’t missed a single DTM race in 15 years so it’s a big discussion.  I will speak to my bosses tomorrow morning to see what they say but it’s in their hands so I will respect whatever decision they make.”

Runner-up Timmy Hansen was Top Qualifier at the end of the four qualifying sessions, and spoke positively about the performance of his Peugeot 208 WRX Supercar over the weekend. “The car has been working very well – the whole weekend we’ve had very good starts and the team have done a great job with the car following my test last week,” explained the 24-year-old. “I want to say that I’m very proud of mysecond semi-final. The result is even more special for the Austrian-based team after an incident with Timerzyanov’s car at the previous round in France meant the squad had to change the chassis in order for him to drive this weekend. “We are delighted with this result after a difficult season and we are now looking forward to Riga,” said team boss, Max Pucher.

Reigning Champion Solberg finished the weekend in seventh position.
“Frustration is definitely the word from here,” explained Solberg. “We made it through qualifying into the semi-final and that race started OK. I made a good start from where I was on the grid. I was behind Loeb going down the hairpin and then Larsson hit me and knocked me wide. After that, I did everything I could, I tried my best to come back at them [Loeb and Larsson fighting ahead], but the final wasn’t possible this time. I’m really disappointed, but let’s look forward and push on for the next race.”

Elsewhere, double DTM champion Timo Scheider made his return to World RX and finished 17th in the Intermediate Classification standings in a Munnich Motorsport Seat Ibiza, one place ahead of Ken Block who had a challenging weekend in his Hoonigan Racing Division prepared Ford Focus RS RX after suffering gearbox problems in Q3.

In the fifth round of the FIA European Rallycross Championship for Super1600, Denmark’s Ulrik Linnemann triumphed in his Peugeot 208.  Hungary’s Luigi finished runner-up at the wheel of his Skoda Fabia and Lithuania’s Kasparas Navickas was third in another Skoda Fabia.

In the penultimate round of the supporting RX Lites Cup, it was Cyril Raymond who took three qualifying wins and the overall victory. Norwegians Thomas Bryntesson and Simon Wago Syversen finished second and third.  Raymond’s win this weekend has seen the Frenchman extend his lead over Bryntesson in the overall standings by eight points.

World RX Managing Director for IMG, Paul Bellamy, concluded: “We’ve had 28,000 passionate motorsport fans travel to the Circuit de Barcelona-Catalunya this weekend. Well done to Mattias who took a well-deserved victory and in doing so managed to move ahead of Petter in the overall standings, which has made this year’s title fight even more exciting.  Now it remains to be seen whether Mattias will be able to compete in Germany or whether he will be required to race in DTM.  Either way, it’s going to be a very exciting final three rounds.  It’s also been a very positive weekend for Peugeot with Kevin Hansen crowned Euro RX Champion and Timmy Hansen finishing second in World RX. The Hansen family now have 15 Euro RX titles between them, which is a staggering achievement. We now look forward to Riga with the World Championship visiting Latvia for the first time.”

A new location awaits the World RX crews for round 10 of the World Championship as the team prepare to compete at the all-new rallycross circuit at the Bikernieki circuit in Riga, Latvia.  Neste World RX of Latvia will take place in just under two weeks’ time (1-2 October).