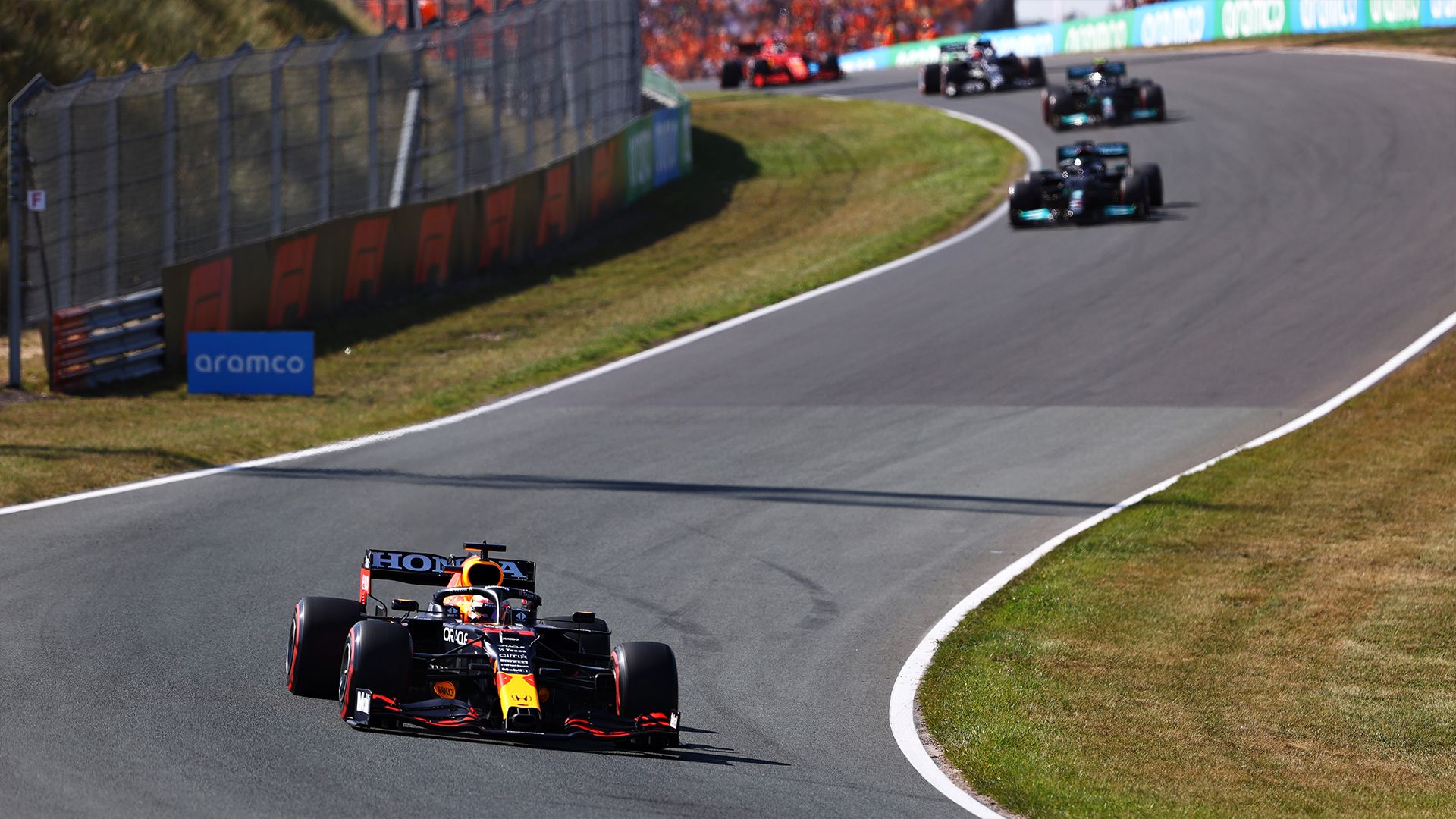 Red Bull’s Max Verstappen scored the win in F1 Dutch GP ahead of Mercedes duo of Lewis Hamilton and Valtteri Bottas, to retake the points lead.

Behind them, Alpine’s Fernando Alonso was up to seventh after clearing multiple cars, including teammate Esteban Ocon on the bank of Turn 3. McLaren’s Daniel Ricciardo was ninth with Alfa Romeo’s Antonio Giovinazzi rounding the Top 10.

Even though Alonso made up places he had two near misses on his rear. On the run-up to Turn 3, Williams’ George Russell nearly clouted the back of him, when the Spaniard was fighting with teammate Ocon, while at Turn 7, Giovinazzi nearly ran into him.

Ocon hurried Alonso for couple of laps but dropped back, as replays showed fight between the Haas duo after Nikita Mazepin passed Mick Schumacher on the opening lap. The German had to take the outside line at Turn 1, but not before getting blocked on the inside.

He pitted early for hard tyres and change of front wing, due to a damage. There was an early stop for Red Bull’s Sergio Perez too after he started from the pitlane on the hard compound. A big lock-up while trying to overtake Mazepin at Turn 1, ruined his tyres.

There was another early stop for Aston Martin’s Sebastian Vettel, who switched from soft to medium tyres, as up ahead Verstappen comfortably led the F1 Dutch GP from Hamilton and Bottas – where they bridged a good gap to Gasly in fourth.

Hamilton, meanwhile, was the first to pit on Lap 20 to switch to medium tyres, but it was a slow one, while Verstappen followed up on Lap 21 to retain his F1 Dutch GP lead. Bottas was left out for long and he sort of played his role to back the Dutchman.

It allowed Hamilton to close in, but Verstappen built a gap still after passing the Finn. He finally pitted to retain third from Gasly, Leclerc and Sainz. The first stop for McLaren’s Lando Norris was delayed as he ran seventh from Perez and the Alpine duo.

Russell’s chance of a Top 10 lessened after he was handed a 5s penalty for speeding in pitlane, as Giovinazzi’s points chance seemingly lessened after he pitted early for the second time. Ahead of him, Vettel spun on his own at Turn 3 banking.

Bottas had to take evasive action as Vettel continued on in 17th. Mercedes went for an early second stop for Hamilton on Lap 40, which Red Bull reacted to on Lap 41 with Verstappen. But the former was on the medium, while the latter was put on hard tyres.

While most went for their second stop, Alfa Romeo’s Robert Kubica and McLaren’s Norris went longest on their first stint to pit only after more than 40 laps – with the latter going the longest. The strategy allowed him to pip three cars in the process.

Mazepin, meanwhile, was the first to retire from the F1 Dutch GP due to hydraulics issue. His teammate had a moment in the left-hander to out gravel on the track, just when AlphaTauri’s Yuki Tsunoda retired with suspected power issues.

At the front, Verstappen had a sound lead on Hamilton, with Bottas in third from Gasly and Leclerc in the Top 5. Behind them, Sainz was sixth ahead of Alonso, who had Ocon on his tail, while Norris started to close in on the Frenchman for eighth.

Ricciardo was 10th but after Perez’s second stop, he caught his tail pretty soon. He eventually passed him and set a charge on his teammate Norris, who couldn’t bridge the gap to Ocon as much. In front of him, Alonso caught up Sainz for sixth.

Perez eventually passed Norris at Turn 1 but the two made contact with the Mexican on the outside, touching wheels. The stewards noted the incident, as the Red Bull driver caught the back of Ocon, while Alonso continued to chase Sainz for sixth.

Hamilton was still second on the road with Bottas third, as Verstappen took the F1 points lead with a win in Dutch GP. The Top 3 were in a different league to have lapped everyone from fourth onward, with Gasly leading Leclerc in the Top 5.

Behind him, Alonso got Sainz on the final for sixth, as Perez cleared Ocon for eighth from the pitlane, with Norris rounding the Top 10. Teammate Ricciardo was 11th with Stroll leading teammate Vettel, while Giovinazzi led Kubica in the Top 15.

Latifi was 16th as Russell was classified in 17th, even though he did not see the chequered flag, as Schumacher was 18th. Everyone from Gasly onward was lapped by the leaders, with everyone from Stroll finishing two laps behind and Schumacher ending up three behind.