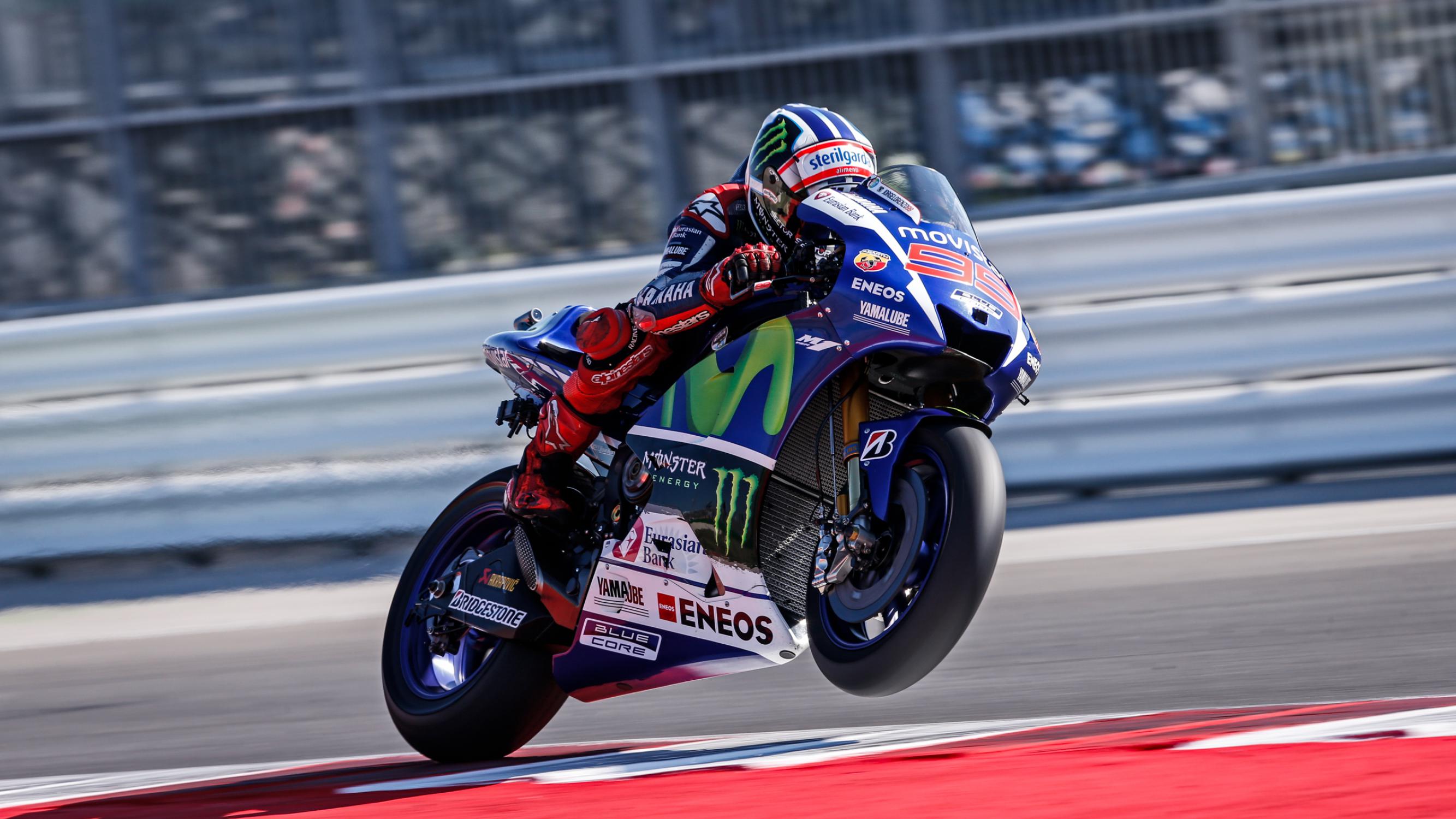 Jorge Lorenzo sets a new Pole Record to take his third pole position of the season with Marquez and Rossi completing the front row.

Movistar Yamaha’s Lorenzo produced an incredible display of riding to take his 33rd MotoGP™ pole position in perfect conditions at the Misano World Circuit Marco Simoncelli to set a 1’32.146. The Spaniard obliterated Marquez’s 2013 Pole Record (1’32.915) by almost eight-tenths of a second as he set the fastest ever lap by a MotoGP™ bike around the 4.2km track on the Adriatic coast.

Lorenzo utilised two stops to allow him to put in three runs on fresh slicks. He set his fastest time on his second run, and looked on for a 1’31 on his third before he was hampered by his teammate Rossi riding slowly on the racing line. Lorenzo – who has never finished off the podium at Misano – showed complete domination on Saturday by topping FP3 & FP4 before going on to take his 59th career pole.

Repsol Honda’s Marquez had been the main threat to Lorenzo over the course of the weekend, topping FP1 and finishing in second behind his compatriot in every other session. Marquez also made two stops and set his best time on his third run but still found himself 0.106s behind Lorenzo and will start from the middle of the front row.

Movistar Yamaha’s Rossi only went for a one-stop strategy but it paid off for the nine-time World Champion as he managed to improve his time from practice by over four-tenths to claim only his third front row start of the season. Rossi was just 0.212s behind Lorenzo as he looks to defend his 12-point lead in the standings over his teammate and take back-to-back wins at his home grand prix. He had earlier tried the aerodynamic ‘winglets’ in FP4 that Lorenzo debuted on Friday, but neither Yamaha rider used them during qualifying.

Repsol Honda’s Dani Pedrosa (+0.288s) will start from the front of the second row as the Spaniard aims to make it three podiums in a row at Misano in Sunday’s race. He finished ahead of the Ducati Test Team rider of Michele Pirro (+0.590s) who will start as the leading Ducati in fifth despite a crash earlier in FP4.

Monster Yamaha Tech 3’s Bradley Smith (+0.655s) will start as the leading Satellite rider in sixth as he looks to make it 19 points scoring finishes in a row. Ducati Team’s Andrea Iannone will start from the front of the third row ahead of his teammate Andrea Dovizioso in eighth.

Octo Pramac Racing’s Danilo Petrucci made the most of his upgrade to the Desmosedici GP14.2 this weekend to complete the third row. Aleix Espargaro (Team Suzuki Ecstar) and Cal Crutchlow (LCR Honda) had earlier made it through from Q1 and will start in 10th and 11th respectively. Pol Espargaro (Monster Yamaha Tech 3) will have to start from 12th after he crashed at turn 9 ending his session after just two laps.

EG 0,0 Marc VDS’s Scott Redding well start from 13th after failing to make it through from Q1 by just 0.194s, while Loris Baz (Forward Racing) is the leading open class rider in 16th. Australian Jack Miller (LCR Honda) will start from the front of the sixth row in 16th, while Aspar MotoGP Team riders Eugene Laverty and Nicky Hayden are in 21st and 23rd respectively.