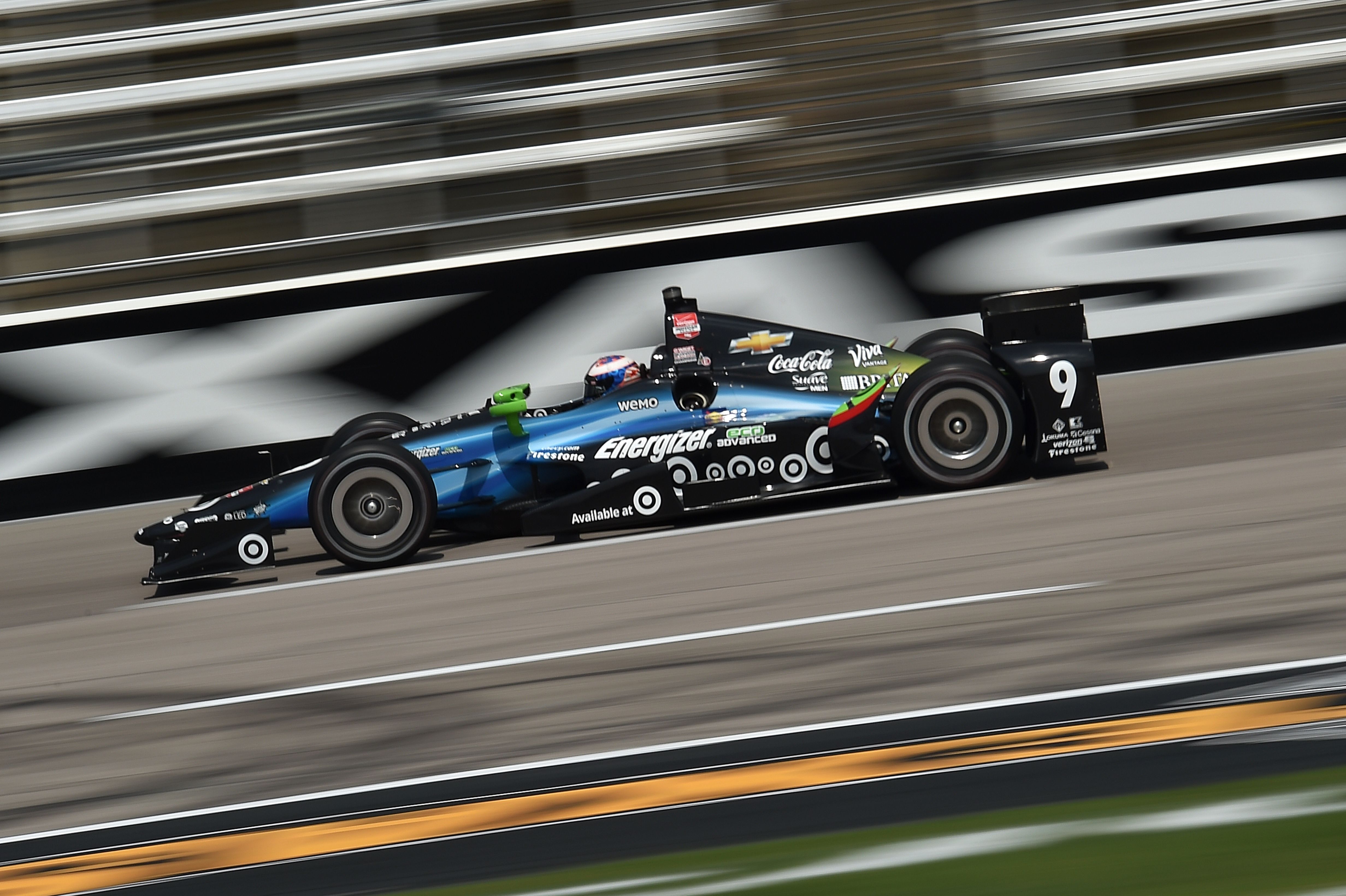 Scott Dixon got his second win of the season at Texas Motor Speedway. New Zealander’s victory was overwhelming and with no accidents. Kanaan completed the double from Ganassi while Castroneves completed the podium in a very tough day for Penske.

The race in “the second home of IndyCar” had Will Power as pole sitter who led a Penske dominated top5, except for the winner of Race 1 in Detroit, Carlos Muñoz who started from fourth place.

The first surprise before the race was starred by James Hinchcliffe, who from home was the “Start your engines” leader. A Hinchcliffe that this race was replaced by a driver who next week will compete in the 24 Hours of Le Mans, Ryan Briscoe.

The start was postponed around since cars were not aligned, but when they were, the race started perfectly for Power that held the race lead to Pagenaud, Castroneves and Muñoz. Montoya lost positions.

One of the keys of the race were the tires, and how to keep them here is rolling on the outside. Fact that made Carlos Munoz (Andretti Autosport) and Tony Kanaan (Chip Ganassi Racing) to beat Helio Castroneves (Team Penske) for third and fourth place. In head, Pagenaud (Team Penske) got to beat his teammate Will Power for the race lead.

On lap 28, Simon Pagenaud was beginning to lap the drivers at back of the grid, while Power lost second place with Tony Kanaan and Castroneves also on the active driver with the most wins in Texas. Carpenter and Graham Rahal decided to stop earlier than usual in boxes, suffering troubles while keeping the car under control.

On lap 42 the pit stops started, the first driver to do it was Muñoz. Meanwhile, Power continued to lose positions, this time with Montoya (Team Penske).

On lap 50 after the completion of the first pit stop for all drivers in the race, at the time clean, Pagenaud kept the lead followed by Kanaan, Montoya, Castroneves and Power, far away from the other drivers. Behind the comeback of Ryan Briscoe (Peterson Schmidt Motorsport) who fought as equals with Carpenter and Andretti was really good.

Although the pace was impressive by Pagenaud, Tony Kanaan managed to beat the French on lap 68. The Brazilian got a distance of 5 seconds over 10 laps with Pagenaud who later looked beaten by the winner of the Indianapolis 500, Juan Pablo Montoya and also to Castroneves who at one point exceeded both drivers.

Just then the yellow flag appeared for the first time, by inspection of the track. This was the second stop for many teams. In the box, Pagenaud lost much time due to many changes that made their mechanics in his car. Montoya was leading the race now, followed by Castroneves, Kanaan, Dixon and Power through the pit stop; Pagenaud was down to ninth place.

And again, unfortunately, Dale Coyne had problems in the pit stop. Tristan Vautier touched Pippa Mann’s tyre in the pit lane, causing a very dangerous situation with a tyre walking alone in the pit lane.

The green flag was back on track on lap 98. After a round of battles one on one, Montoya began to lose positions, making Kanaan take the lead followed by Dixon, Castroneves and Muñoz. Montoya fell to seventh place. Unlike Montoya, Briscoe made an incredible comeback and was placed fourth on lap 115.

Around lap 140, the third stops were produced in box. The first to do so were the Penske who failed to keep pace with the Chip Ganassi.

After the pit stops, the Ganassis from Dixon and Kanaan remained in the lead followed by Castroneves, Briscoe and Montoya. In addition, both CFH Racing, Carpenter and Newgarden, abandoned the race while Power was dubbed by Ganassi.

Another one also dubbed was the leader of the race in the early laps, Simon Pagenaud, who could do nothing under a brutal pace of Scott Dixon. The man fromNew Zealand opened the turn of the fourth stop on lap 186.

Dixon led a brutal pace to complete the fourth stop, followed by Kanaan, Castroneves and Montoya, the only ones not yet been lapped.

In the absence of 24 laps, Castroneves dared to make a fifth stop, the other leaders would do the same. This fact helped Castroneves to reach Kanaan in the fight for third place, as Andretti’s Marco Andretti and Carlos Muñoz had not stopped to box.

Finally, Dixon got the second victory of the season in Ganassi doubled thanks to the second place of Kanaan. Castroneves ran behind them, followed by Montoya and Andretti.

Juan Pablo Montoya with his fourth place today maintains and extends the championship lead on 35 points with Will Power behind. Dixon is placed third, 43 points behind. Castroneves and Rahal hold the fourth and fifth, while Marco Andretti, the only driver to complete every lap this season, climbing to sixth place. Tony Kanaan goes up to ninth place thanks to the podium today.